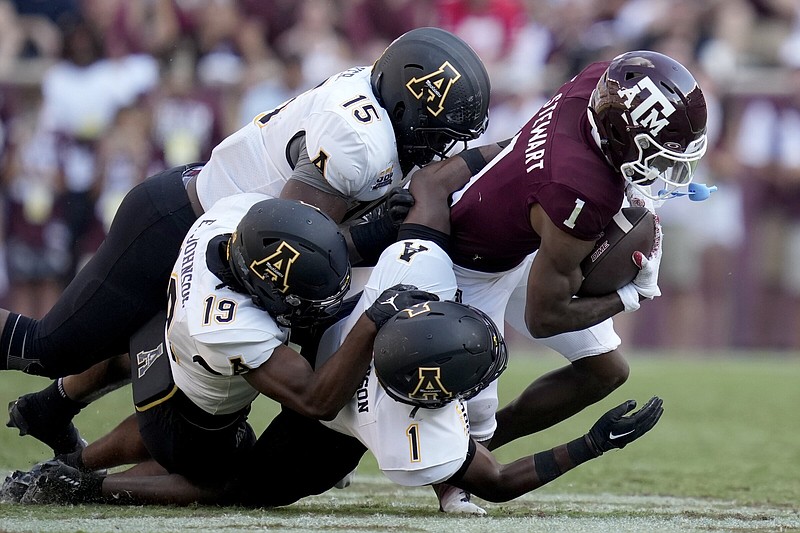 It marks Arkansas’ first 2022 trip away from Reynolds Razorback Stadium and the Aggies’ first venture away from Kyle Field.

After a swaggering summer headlined war of words with Alabama Coach Nick Saban, Fisher was silenced by Appalachian State. The Mountaineers upset his Aggies 17-14 two Saturdays ago.

Given how an overtime upset administered by Louisiana-Monroe in Little Rock in 2012 defined John L. Smith’s 4-8 Razorbacks, and massive upsets by North Texas, San Jose State and Western Kentucky in 2018 and 2019 defined the consecutively abysmal 2-10, 2-10 Chad Morris era, Pittman’s Hogs faced an ominous precedent had they lost at home to a 26-point underdog.

Whereas the Morris teams folded like an accordion, 44-17 and 45-19 upon trailing North Texas and Western Kentucky early, Pittman’s Razorbacks rallied and prevailed.

Upon retrospect, Appalachian State and Missouri State both were far more than oddsmakers projected.

The Mountaineers have grown to FBS status in the Group of Five, too often disrespected, yet without a doubt emerging Sun Belt Conference. They nearly upset Miami last year, and opened this season battling ACC power North Carolina to the 63-61 wire in Chapel Hill, N.C., before upending the Aggies.

The Mountaineers may well be better than Miami, still in the Top 25 but recently living more off past prowess than consistent performance.

Nevertheless, the Hurricanes ranked 13th when A&M showed its mettle rebounding from its fall to the Mountaineers.