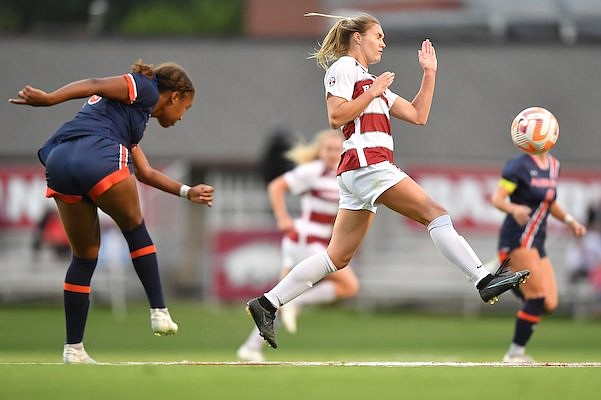 Arkansas' Anna Podojil (right) deflects a pass Thursday, Sept. 22, 2022, from Auburn's Hayden Colson during the first half of play at Razorback Field on the university campus in Fayetteville.

FAYETTEVILLE — Arkansas forward Anna Podojil took sole possession of the program’s career points record after assisting the game winner in a 1-0 victory over Auburn on Thursday night at Razorback Field.

After 54 minutes of scoreless play, senior forward Jessica De Filippo connected on a low cross from Podojil to give Arkansas the lead. The assist was Podojil’s 26th of her career, which ties her for third in program history with Claire Kelley and Holly Cowins.

Podojil has 108 career points. She entered Thursday tied with Parker Goins, Podjil's former teammate who previously set the career record during a five-year career from 2017-21.

De Filippo tucked the ball inside the far post under diving Auburn goalkeeper Maddie Prohaska. De Filippo is now tied with Podojil for the team lead with four goals through nine games.

"We worked a lot on getting into the box this week," De Filippo said. "When I saw that ball come into the box, I knew I had to get my foot on it."

The senior forward transferred to Arkansas from Louisville in 2021, but suffered a season-ending after nine games last year. She has been a permanent fixture in Arkansas' starting lineup this season.

"Being healthy (and) able to help my team on a different level is really exciting," De Filippo said.

Arkansas coach Colby Hale said the Razorbacks' goal was exactly how they drew it up in the locker room. He said they placed an emphasis on getting the ball wide, sending in crosses, and making "hungry" runs.

"Obviously, we've got to score more goals but I thought the overall offensive production was better," Hale said

Podojil nearly put the Razorbacks (6-2-1, 1-1 SEC) on the scoreboard twice in the first half. She narrowly missed a half-volley from around the penalty spot, and blasted a strike from outside the 18-yard box wide of the post.

Arkansas controlled possession for the majority of the first half as Auburn struggled to connect consecutive passes. The Tigers (4-2-4, 0-2) often attempted to bypass the defensive pressure by lofting passes over the top of the defense rather than attempting to play through it.

The Hogs out-shot the Tigers 21-6. The Razorbacks are 6-0 when they have attempted more shots than their opponents this season.

Midfielder Bea Franklin left the match with two minutes to play after a stoppage for a potential head injury.

Injuries have tested the Razorbacks’ depth throughout the first half of the season. Senior defender Bryana Hunter and midfielder Van Fitch have yet to return since suffering injuries in the season opener against Saint Louis.

Freshman defender Ella Riley has taken Hunter's place as the stopper along the Razorbacks' defensive line. Hale has been pleased with the way his team has dealt with the absences.

"We need some of those kids to continue to step up for sure," Hale said.

The Razorbacks will travel to Columbia, S.C., to face eighth-ranked South Carolina on Sunday at 1 p.m. The game will be streamed on SEC Network-Plus.