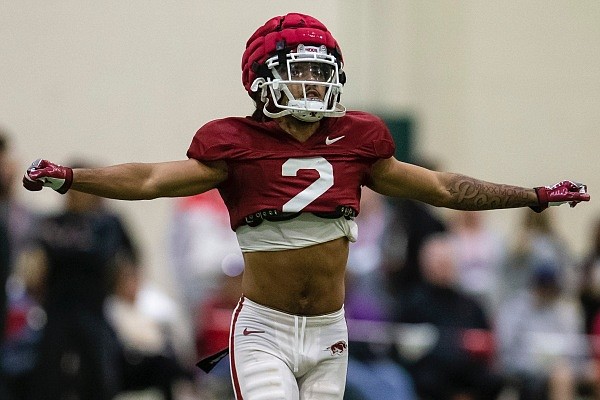 FAYETTEVILLE — Junior defensive back Myles Slusher ditched the green no-contact jersey and appears to have the green light for playing in Saturday’s Southwest Classic for the University of Arkansas.

The No. 10 Razorbacks (3-0, 1-0 SEC) could use another veteran in the secondary, which has been shredded the past two weeks by South Carolina’s Spencer Rattler and Missouri State’s Jason Shelley for an average of 367 yards per game.

Slusher has been out since going down with a head/neck issue in the second quarter of the season-opener while making a jarring tackle for loss on Cincinnati’s 255-pound tight end Leonard Taylor.

How the Razorbacks align in the secondary will be of note, as Slusher can play nickel back, where he started the opener, or any of the safety spots or cornerback. He, senior Simeon Blair and sophomore Jayden Johnson were the three interior defensive backs during the Razorbacks’ fastball starts Tuesday.

Arkansas has been looking for a productive combination of defensive backs since losing Slusher and team captain/safety Jalen Catalon in the 31-24 win over Cincinnati.

“The secondary, they’re getting guys healthy and getting back on the field,” Texas A&M Coach Jimbo Fisher said Wednesday. “They had a lot of starters that were out, so they’ll be even stronger than they have been on film.”

The Razorbacks missed a lot of tackles last week and rank at the bottom of the SEC in tackling efficiency as rated by Pro Football Focus.

The Bearcats passed for 325 yards against Arkansas, while Rattler racked up 377 yards and Shelley went for 357 yards last week. The Razorbacks lead the FBS with 17 sacks but are last in passing yards allowed at 353 per game.

Tailback Dominique Johnson, who has been cleared medically to return to action, might get his first snaps of the season Saturday. Sophomore Raheim “Rocket” Sanders, who ranks third nationally with 146.7 rushing yards per game, took the large bulk of carries last week, while AJ Green and Rashod Dubinion saw limited time.

Johnson ran for 575 yards last year and led the team with 7 touchdowns and 5.9 yards per carry.

Texas A&M Coach Jimbo Fisher is obviously impressed by Arkansas quarterback KJ Jefferson and the Razorbacks’ skill talent around him.

He said as much in his rapid-fire assessment Monday.

“Dynamic. Arm, leg, strong,” Fisher said of the 6-3, 242-pound junior. “That’s the other thing. Big, strong, athletic. Designed quarterback runs and enough scrambles in what he does. He’s got maturity. He can get the ball down the field.”

Fisher said he is also aware of the top weapons on the edges.

“Big receivers that can run,” he said. “I know Warren Thompson is a guy we recruited at Florida State when I was leaving big time. I mean [Jadon] Haselwood, I remember him out of high School. And the guy who just came in from Toledo who was at Georgia [MAtt Landers] … he can really fly. I apologize for missing his name right now. But he can run and play. The tight ends are dynamic, the backs are good.

“But he makes it go. Jefferson makes it go, man. He’s one of the best in the business.”

Redshirt sophomore Malik Hornsby will return to AT&T Stadium in his home state of Texas, where he got his most significant action as a college quarterback last season.

Hornsby took over for 20 consecutive offensive plays covering three series in the second half after starting quarterback KJ Jefferson took a shot to the knee. Hornsby led a 42-yard field goal drive after Montaric Brown’s tipped interception, giving Arkansas a 10-point lead in the fourth quarter.

Hornsby had productive touches in the first two games this season but did not see action last week.

“We have several personnel groupings with him in for this week,” Coach Sam Pittman said. “It all depends a little bit on how the game’s going and different things of that nature. We’re certainly planning on using him in some formations.”

A reporter on Wednesday’s SEC coaches teleconference asked Arkansas Coach Sam Pittman whether he and the coaching staff went through the tape with the players making corrections from the Missouri State game or whether that was a “flush and move on to the next opponent” kind of performance.

“No, we didn’t flush it. I can promise you that,” Pittman said. “We’ve got some areas that we have to fix, and to put it in a nutshell, we have to cover better, we have to tackle better and we have to hold onto the football.

“And I don’t care who you’re playing, they had over 200 … YAC yards [yards after catch] after we should have got them on the ground. Now, you have to credit their players as well. But we have to tackle better, we have to cover better and we have to hang onto the football.”

Quarterback KJ Jefferson did not hesitate to go back to tight end Trey Knox at a key moment in last Saturday’s 38-27 win over Missouri State, despite an earlier gaffe.

Knox had a pass at midfield strike him in the hands, deflect into the air and come down in the arms of diving Missouri State cornerback Caleb Blake for Jefferson’s first interception of the season.

In the fourth quarter, with Arkansas holding a tenuous 31-27 lead and facing a third-and-12 play from its 31, Jefferson found Knox over the middle for a 21-yard catch and run. The third down conversion set up Jefferson’s game-clinching 1-yard touchdown run with 1:39 remaining.

The Razorbacks kept their offense on the field on a fourth-and-9 play while trailing 17-7 late in the second quarter against Missouri State.

The majority of the crowd of 74,133 at Reynolds Razorback Stadium appeared to like the decision as they cheered to see Arkansas taking the gamble at the Missouri State 39. Moments later, a chunk of those fans booed the result, a 5-yard gain up the middle by Rashod Dubinion. The turnover on loss of downs gave Missouri State the ball back at their 34 with 2:27 left in the half.

“The call was, it was a run,” Sam Pittman said. “We thought that we had them in 2 and quarters, thought we could surprise them and it was a run to run, basically we can hand it or KJ [Jefferson] can run it. It didn’t work. That’s the honest to goodness truth. I wish I could tell you we had a pass on and something happened. That’s the truth, though. It didn’t work.”

The Arkansas defense got a three and out, forcing a punt, and the Razorbacks scored two plays later on Jadon Haselwood’s 38-yard catch, which followed Matt Landers’ 47-yard reception.

The situation looked close to dire for Arkansas when it fell behind 27-17 early in the fourth quarter against Missouri State, the No. 5 team in the FCS coached by former Hog boss Bobby Petrino.

The previous 27 times Arkansas had trailed entering the fourth quarter, it had lost the game — dating to a late rally in a 39-38 win over Coastal Carolina on Nov. 4, 2017. The Razorbacks trailed 38-25 with 12:57 to play in that game before TJ Hammonds’ 88-yard touchdown run, followed by Cole Kelley’s 1-yard keeper with 1:55 to play.

On Saturday, Arkansas scored the final 21 points to survive 38-27 and snap that skid.