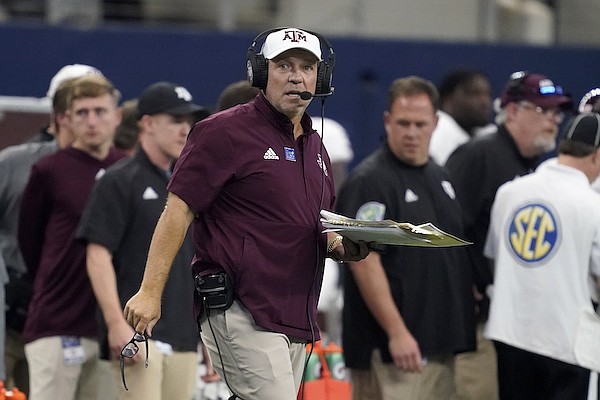 Pittman, the third-year coach of No. 10 Arkansas (3-0, 1-0 SEC), considers Fisher, whose No. 23 Aggies (2-1) will be playing their SEC opener against the Razorbacks on Saturday, to be a good friend in the business, and the feeling is mutual.

Fisher inquired about hiring Pittman a few years back, and while Pittman did not take the job, the two hit it off.

“I really like Sam and I consider him a friend and a really good guy and a good coach,” Fisher said Wednesday. “I’ve been out in recruiting, you spend hours together and just be able to get a good feel for guys. I think he’s a genuinely good person, good guy who’s a good coach. We seemed to really hit it off and really enjoy being around each other.”

Pittman said the conversations the two had for Fisher’s job opening continued a good relationship.

“We have several friends that certainly know each other. So I’m able to interact with my friends through him,” Pittman said.

“Then certainly since I’ve become a head coach, I’ve really respected him in the meetings,” Pittman said. “We’ve been able to visit there and things of that nature. So a lot of that is because we have similar friends and I feel like I know him. Everything I know about him I like.”

The two have split a pair of meetings, with Texas A&M prevailing 42-31 in College Station, Texas, in 2020, and Arkansas upsetting the No. 6 Aggies 20-10 last season in Arlington, Texas.

Arkansas leads the series against Texas A&M by a 42-33-3 count dating back to their first meeting in 1903, a 6-0 win for the Aggies in Arlington, Texas.

There have been a surprising number of shutouts in the series (18) with both teams notching nine.

The Razorbacks’ two lost fumbles last week as part of a 3-0 takeaway-battle loss against Missouri State were such a concern for the coaching staff, they devoted more practice time to a ball security circuit Wednesday.

“Usually on Wednesdays we’re kind of through with ball security as far as pre-practice, but we did another one today just to put in on our mind, ‘Hey, we’ve got to hold on to the ball,’ ” Pittman said on his radio show Wednesday night.

Arkansas ranked eighth in the country with a plus-2.0 turnover margin through two games, but the Hogs nearly gave it all back last week while not forcing a turnover from the Bears.

Quarterback KJ Jefferson had the ball wrestled away by linebacker linebacker Von Young at the Bears’ 36 on Arkansas’ second series. Then running back Raheim Sanders lost the ball on a helmet hit from linebacker Ferrin Manuleleua at the Missouri State 1 on the next possession.

Those miscues helped Missouri State build a 17-0 lead. Missouri State linebacker Tahj Chambers made a diving interception on a tipped pass at the Arkansas 49 to end the Hogs’ first drive of the second half.

Pittman said a team that loses the turnover battle 3-0 has an 11% chance of winning the game.

Texas A&M had a stable offensive performance with Max Johnson at quarterback last week against Miami after a lackluster showing the week before under two-game starter Haynes King. Johnson, a transfer from LSU, completed 10 of 20 passes for 140 yards and a touchdown and ran 7 times for 23 yards.

“Him going to A&M from LSU was a great transition for him because there are a lot of similarities in what they’re asking him to do at both places,” Arkansas Coach Sam Pittman said on his weekly radio show.

“He really played well and seemed comfortable, made really good throws. Didn’t throw into traffic. And he ran it well on some on read stuff. So I thought he did a really good job of helping A&M win that game.”

Arkansas players wearing No. 14 had big games against Missouri State.

Bryce Stephens, No. 14 on offense, electrified the home crowd with his 82-yard punt return touchdown early in the fourth quarter to give Arkansas its first lead at 31-27. Stephens also had returns of 34 and 10 yards that were brought back by holding penalties. But the redshirt freshman from Oklahoma City wound up with three returns for 105 yards, good for eighth on the school’s single-game chart and second for a player with three or fewer returns behind Joe Adams’ 120 yards against Ole Miss in 2010.

Adams, who was in attendance Saturday as part of the UA Hall of Honor induction class, had two punt return touchdowns against Missouri State in the Hogs’ 51-7 win in 2011, leading to his school-record 174 punt return yards that day.

On defense, No. 14 Jordan Domineck racked up 2.5 sacks among his seven tackles, taking his season total to 4.5.

The situation looked close to dire for Arkansas when it fell behind 27-17 early in the fourth quarter against Missouri State, the No. 5 team in the FCS coached by former Hog boss Bobby Petrino.

The last 27 times Arkansas had trailed entering the fourth quarter it had lost the game, dating to a late rally in a 39-38 win over Coastal Carolina on Nov. 4, 2017. The Razorbacks trailed 38-25 with 12:57 to play in that game before TJ Hammonds’ 88-yard touchdown run, followed by Cole Kelley’s 1-yard keeper with 1:55 to play.

On Saturday, Arkansas scored the final 21 points to survive 38-27 and snap that skid.

For the second consecutive week, the Arkansas offense had a huge round offensive number wiped out by a kneel down on the final play of the game.

Against South Carolina, the Razorbacks had 300 rushing yards before quarterback KJ Jefferson knelt on the final snap to drop that total to 295. The play happened only because Jayden Johnson forced a fumble from Spencer Rattler and Chris Paul Jr. recovered it on the second-to-last play.

In Saturday’s game against Missouri State, Arkansas had 600 total yards before Jefferson knelt for a 3-yard loss on the final snap. The last time the Razorbacks put together a game with 600 yards of total offense came last year when they had 671 total yards in a 42-35 loss at No. 2 Alabama.

Arkansas had a season-low six penalties for 58 yards last week, but the timing of them and the plays they negated were still impactful.

Bryce Stephens had punt returns of 34 and 10 yards in the first half brought back due to holding calls.

The odds for Arkansas to win the national championship more than tripled after the Razorbacks struggled to down FCS Missouri State.

The odds, per BetOnline.ag, went from 75-to-1 last week to 250-to-1 after the Razorbacks had to rally from a 17-0 deficit, which eventually became 27-17 early in the fourth quarter, to beat the Bears.

The Razorbacks drew a crowd of 74,133 against Missouri State, giving Arkansas three consecutive games to open the season with crowds of 72,000 or more.

The last time Arkansas pulled off that feat came in the final five home games of 2016, plus the first on-campus home game in 2017 against TCU.