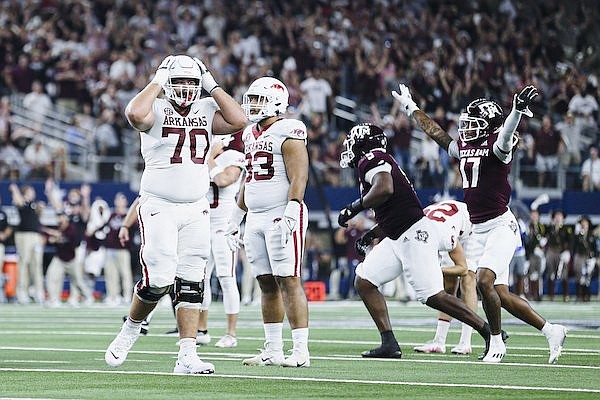 Arkansas and Texas A&M players react after Cam Little missed a field goal in the closing minutes of the Razorbacks' 23-21 loss to the Aggies on Saturday, Sept. 24, 2022, in Arlington, Texas.

ARLINGTON, Texas — Texas A&M has made a habit of dealing out heartbreak to the University of Arkansas in the Southwest Classic.

The No. 23 Aggies did it again on Saturday, rallying from a two-touchdown deficit with the aid of a game-turning defensive touchdown and surviving a late field goal miss to edge the No. 10 Razorbacks 23-21 before a crowd of 63,580 at AT&T Stadium.

Arkansas (3-1, 1-1 SEC) drove into range for a potential game-winning field goal in the closing moments but could not capitalize.

Cam Little’s 42-yard field goal try hit the top of the right goal post, then deflected back and short of the crossbar with 1:30 remaining to allow the Aggies (3-1, 1-0) to escape, snapping the Razorbacks’ four-game winning streak in trophy games.

Texas A&M won for the 10th time in the last 11 meetings in the series, many of them in excruciating fashion for Arkansas fans. The Aggies rallied to win from a 14-point deficit against the Hogs for the third time in the last nine years, adding on to big comebacks in 2014 and 2017.

“Well, that was a tough one,” Arkansas Coach Sam Pittman said. “Give A&M all the credit in the world. You know, they fought back from 14 down.

“I thought we fought back in the fourth quarter. We had a chance to win there at the end, but just unfortunately we didn’t.”

The loss prevented Arkansas from opening 4-0 in back-to-back seasons for what would have been the first time since Coach Ken Hatfield’s last two teams did it in 1988-89.

“It was a heck of a game,” Texas A&M Coach Jimbo Fisher said. “They’ve got a good team. We, by far, are not close to where we need to be. … But we’ve beaten two good football teams not playing at the top of our game.”

KJ Jefferson drove the Razorbacks 40 yards in nine plays to reach the Aggies’ 15 with time winding down. However, a snap ricocheted off the behind of center Ricky Stromberg and tailback Raheim Sanders recovered it at the 25 to cost the Hogs valuable field position.

Jefferson scrambled for a yard on the next play and Pittman allowed the clock to run down to the 1:35 mark before calling his final timeout. Little had been 2 of 2 on field goals of less than 50 yards before pushing the potential game winner to the right.

“He just pushed it a little bit,” Pittman said. “Didn’t hit it real well, it didn’t look to me like.

“After the game I told him that he’s won a lot of games for us and he’ll win a lot more. I mean, I know he’s distraught. But he didn’t mean to miss it. It just didn’t go through.”

Jefferson passed for 171 yards and a pair of scores and rushed for 105 yards to surpass the 1,000-yard rushing mark for his career. Texas A&M held Sanders, the SEC’s leading rusher, to 68 yards on 17 carries. Jadon Haselwood had 5 receptions for 56 yards and Warren Thompson added 2 receptions for 57 yards and a touchdown to pace the Razorbacks.

Jefferson, the junior quarterback, also had a ball security mistake that wound up being the game’s defining play.

Arkansas had early control of the game with a 14-0 lead but lost its grip after a bizarre 97-yard defensive score on a play that was likely a two-touchdown swing.

With Arkansas ahead 14-7, the Razorbacks drove 72 yards to the Aggies’ 3. On the next snap, Jefferson tried a leap from the 3 with the ball extended. Linebacker Chris Russell knocked the ball free and defensive back Tyreek Chappell grabbed it in mid air. He ran to the 18, where Sanders corralled him. But Chappell alertly heard Demani Richardson calling for the ball behind him, he lateraled and Richardson sprinted the final 82 yards for a touchdown.

“It seemed the play when they took the ball down and scored when we’re about to go up 21-7, I think for whatever reason that took a lot of wind out of our sail,” Pittman said on the Razorback Sports Network.

“He made a great play on the ball,” Jefferson said of Russell. “I’ve got to finish, be more aggressive when we’re on the goal line.”

The Aggies botched the extra point as Arkansas maintained a 14-13 lead, but the weird play seemed to put good vibes on the Texas A&M sideline.

Arkansas outgained the Aggies 415-343 in total yardage but did not force a takeaway for the second consecutive game. Arkansas also had three sacks to add to its FBS-leading 17, but Texas A&M quarterback Max Johnson managed to float some balls against heavy blitz pressure into his receivers, including a 10-yard strike to Evan Stewart to get the Aggies on the scoreboard halfway through the second quarter after they went three-and-out on four consecutive possessions to open the game.

Johnson completed 11 of 21 passes for 151 yards and a touchdown and he added 39 rushing yards to complement the 159 piled up by tailback Devon Achane.

The Aggies took the lead on their opening possession of the third quarter, a 70-yard march capped by Achane’s 9-yard touchdown run to make it 20-14.

Jefferson rallied the Razorbacks with a 19-yard completion to Matt Landers to convert a third-and-6 play, then back-to-back 10 yard runs by Sanders and Jefferson helped the Razorbacks drive to the 16 before things unraveled.

Arkansas owned the early momentum with a couple of first-quarter touchdown drives while the Aggies were struggling.

On their second series, Jefferson scrambled for 26 yards into Aggie territory. He then hit Ketron Jackson with a tunnel screen and the Royse City, Texas, product got a kick-out block on the perimeter and a Luke Jones block on the edge for a huge hole and a 32-yard touchdown.

On their next series, Jefferson had plenty of time to survey his options and found Thompson beyond all the Aggies for a deep-ball connection and a 56-yard touchdown.

Texas A&M finally notched a big play on Achane’s 63-yard burst around the left edge from the Aggies’ 7. That led to Johnson’s blitz-beating touchdown throw to Stewart.