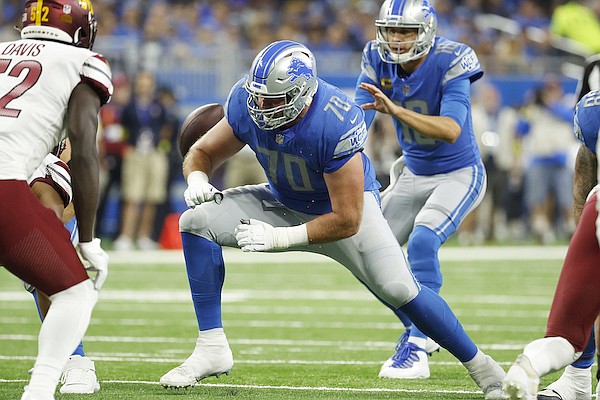 If you weren’t touched emotionally by the video of Dan Skipper in the Detroit Lions’ locker room, then I don’t want to know your cold, cold heart.

For the rest of you, let’s check below the hood on Skipper and a few other NFL players with Arkansas ties.

“Skip, Skip, skip,” were the shouts from Dan Skipper’s teammate in the locker room after Lions coach Dan Campbell cited him for a job well done following a 36-27 win over Washington.

Detroit was desperate for help after injuries on the offensive line and the former Razorback was summoned from the practice squad to fill in. Six years after signing as an undrafted free agent with Dallas, the 6-foot-10 Skipper made his first career start, not at the offensive tackle position he’s played his entire life in football, but at guard.

Following the locker room celebration, coach Campbell sent Skipper out to take questions from the press. Even if he gets cut again at some point, that’s a day he’ll long remember.

As a senior in high school, I signed up for a German speaking class only because a girl I had a crush on said she was joining the class as well.

So, imagine my disappointment when she decided to learn to speak Spanish instead, a turn of events that left me starring out the window and muttering “guten Morgen (good morning) and guten Tag (good day)” the only two phrases in German I ever learned.

That’s the way I feel about Hunter Henry, who missed out on Tom Brady and has instead as his quarterback, Mac Jones, who has targeted Henry only four times in two games. Henry has had some productive years in the NFL but the situation in New England doesn’t look too promising for the former Razorback.

One of the really great aspects in sports is watching young people who came from practically nothing get paid big-time as professional athletes.

That’s what happened recently with Dre Greenlaw, who signed a two-year extension with the 49ers reportedly worth close to $19 million with $10 million guaranteed. Selected by the 49ers with the 148th pick in 2019, Greenlaw has emerged as one of the very best linebackers in the NFL.

Another example that dreams do indeed come true.

Some may be surprised to know Brandon Allen has lasted years in the NFL, which is quite impressive considering he was a sixth-round draft pick by Jacksonville in 2016.

Allen has spent much of that time on the sidelines, but he did make eight of his nine starts while filling in for injured players at Denver and Cincinnati in 2019 and 2020. But tell me that’s not a job you’d absolutely love to do, especially when you’re compensated with an NFL contract.

I had to do a deep dive on the NFL waiver wire to find this little nugget, that John Ridgeway had been claimed by the Washington Commanders after he was left unprotected by the Dallas Cowboys.

Ridgeway, who spent his last year at Arkansas after transferring from Illinois State, could see some actual playing time as a run-stopper on the defensive line for the Commanders.

Let’s just hope he doesn’t meet the same fate as Donovan Jeter, who was removed from the active roster after one game to make room for our man, Ridgeway.

I read an article last week that described Treylon Burks as a “Ray of sunshine” for the Tennessee Titans, who fell to 0-2 following a bad loss to Buffalo on Monday night. Fans of the Warren Lumberbacks and Arkansas Razorbacks, where Burks played before turning pro, are not surprised he’s off to a good start in the NFL.

You know who else is not surprised? SEC defenders, who were burnt by Burks on a regular basis during his three years in the league.

No one needs to know I’m a long-suffering fan of the Chicago Bears except for the fact I was quite pleased when the Bears claimed Armon Watts off waivers from the Vikings.

Surely, the former Razorback can contribute as a run-stopper on defense for the Bears, who need plenty of help.

Yes, the Bears stink. But critics can never take away the 1985 season when the 15-1 Bears won the Super Bowl and proved to the world they were the greatest football team to ever take the field. Except, maybe, for the Miami Dolphins, who went 17-0 in 1972.

Jeesh. You don’t have to be so factual about it.