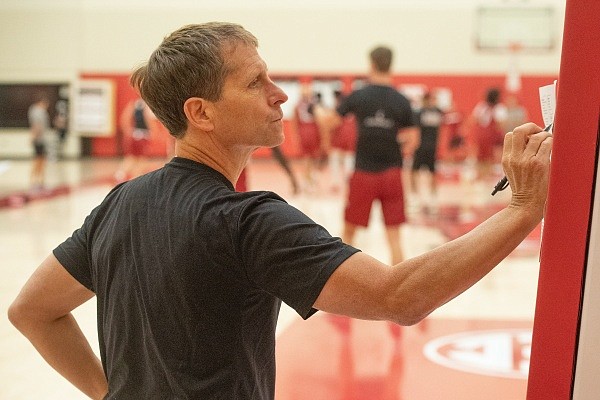 Arkansas head coach Eric Musselman writes notes on a piece of paper at the Razorbacks' first basketball practice of the 2022-23 season on Monday Sept. 26, 2022, in Fayetteville.

FAYETTEVILLE — Eric Musselman paused, looked toward the back of the interview room in Bud Walton Arena then rubbed his chin and smiled when asked Monday afternoon where his fourth team at Arkansas may be better since its final game in Europe in August.

The Razorbacks, expected to be well inside the top 25 of most, if not all, preseason polls in the coming months, completed a 4-0 foreign tour in Italy and Spain and won each of their games by at least a fairly comfortable margin. There were a number of positives to take away from the trip, including the play of Missouri transfer Trevon Brazile, freshman guard Nick Smith Jr. and forward Kamani Johnson.

But the areas in which the team greatly needed to make improvements prior to the Nov. 7 season opener against North Dakota State were striking as well. Chief among them was the mix of at-times sloppy ball handling and live-ball turnovers.

As Arkansas officially opened practice for the 2022-23 season on Monday, Musselman noted that many of the talking points from his group’s first day together months ago remain a central focus in late September. That comes with having a young team.

And with that comes a touch slower overall team progression than in previous years.

More from WholeHogSports: Musselman, Brazile and Council speak with reporters prior to first official practice of 2022-23

“I was just on the phone with Avery Johnson earlier today and he kind of asked about our guys and was asking about the age of them, and (he said), ‘Wow, I haven’t seen a team you’ve ever coached this young,’” Musselman said. “With six freshmen, even (Brazile), I mean, you’re talking about a player who is just in his sophomore year, so we have a young team, a lot of new guys. We find ourselves repeating ourselves a lot in practice.

“We’re not moving ahead maybe at the rate that I want to because of having to repeat things. We’ve got to move the chains every week a little bit further.”

An aspect of the game in which the team has improved, he added, is its understanding of second and third options offensively. Musselman, given that the Razorbacks have entered into a 20-hour-per-week practice window, is hopeful that points of emphasis in other areas will follow suit.

He suggested that in the four-hour-per-week stretch of the offseason that players did not always carry work done in drills or lessons learned in Xs and Os sessions on the whiteboard to the floor like he had hoped. The Razorbacks have also had a number of players miss practice time with what Musselman described as “common colds and common sniffles.”

It all plays a part in the team’s ability to grow together ahead of a season chock full of expectations.

“With younger players and with a younger group and a newer group, we’re repeating ourselves a lot, more so than any team I’ve ever coached,” Musselman said. “With that comes a little bit of patience, and hopefully there will be growth from September to October.

“We’ve got to get a lot better than where we are.”

Brazile, who turned in a hyper-efficient foreign tour for the Razorbacks, and Wichita State transfer Ricky Council on Monday relayed an understanding of the team’s makeup and its need for experienced voices. Council is new to Arkansas and the SEC, but has multiple college seasons under his belt from his time with the Shockers.

Brazile on his resume has what only a select few Razorbacks possess — a season of SEC basketball. Together, they are attempting to serve as leaders in unique ways for Musselman.

Junior guard Davonte Davis and Johnson have the most time spent with Musselman, but more leaders and mature voices could be the difference in Arkansas reaching its potential sooner rather than later.

“It took me a while to realize I was one of the older guys on the team,” Council said with a smile. “We’ve got about five, six, seven, eight freshmen. I don't know. It’s a young team, and Coach said he’s not used to it, so I know he makes his own adjustments with that.

“But at the end of the day we’re just going to have to buy in. He’s used to coaching older guys, so I’ve just got to be mature.”

The 10 extra practices ahead of the Razorbacks’ foreign tour were beneficial in terms of players simply growing more accustomed to one another’s tendencies and habits. It also provided them an extended look at what is expected in workouts.

Brazile, Council and their teammates will not be in for any surprises between now and the beginning of the season.

“I think we just need to have a lot of energy,” Brazile said. “Games are coming up soon, so I think high energy and high enthusiasm would be good for us right now.”

Musselman stated that he believes the Razorbacks are further along defensively than on the other end. Learning the value of each possession is an area that has experienced solid growth since Europe, he remarked.

Practicing a bit of patience is high on Musselman's priority list in the coming weeks. And he has a coaching staff equipped to assist him with that.

"My wife reminds me walking out the door that each day at practice you're going to see some turnovers and to be patient,” Musselman said. “The last few years of us doing this, our teams have always gotten better and (she said) to keep that in mind. We have a staff text thread that we're in and Coach (Keith) Smart does a good job of putting things in perspective.

“We'll get better. We've just got to keep repeating.”