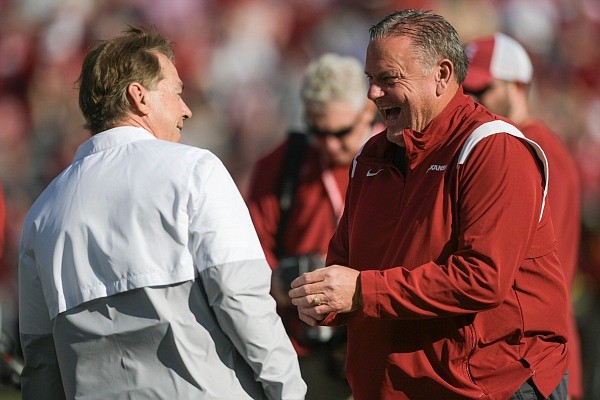 “He’s the greatest coach of all-time in college football, in my opinion,” Pittman said while applying other positive descriptions of the 70-year old who has a 182-25 record and six national championships in his 16th year at Alabama.

A reporter mentioned that a lot of coaches might have thought Saban would have retired from the Tide before hitting 70 while asking Pittman about him.

“I don’t know if you’re supposed to [say it] or not, but I think he’s fantastic,” Pittman said. “He’s been so kind and so good to me. I sit right next to him in the SEC head coaches meetings and I ask him questions and he’s been kind enough to answer them.

“He’s treated me outstanding. I have nothing but wonderful things to say about him. … I kind of was wondering when he was going to retire, too, but I don’t know when that’s going to come.”

Saban, who called Arkansas a “dangerous” team, was also complimentary of his counterpart.

“Sam’s done a great job there, to me,” Saban said. “They play with toughness. They run the ball effectively, stop the run on defense. I mean, their guys play hard. They’ve got a real culture there that shows great intangibles.

“This is a really, really good all-around team. And it’s going to take great preparation on our part to go on the road and be able to play the way we need to play against a very good SEC team.”

The Razorbacks worked on the outdoor practice fields in helmets and shorts on a relatively mild day with slight breezes and the temperature in the low 80s.

That drew a stark contrast to last week, when Arkansas practiced indoors in preparation for a game inside climate-controlled AT&T Stadium with outdoor temperatures in the mid 90s.

Sam Pittman was asked how he emphasized the fact that two or three plays on Saturday could have turned the outcome in the Razorbacks’ favor during a 23-21 loss to Texas A&M.

“It’s like every play, but those are the ones that stick out,” Pittman said.

Pittman also mentioned how the Razorbacks overcame a 5-yard loss on a potential double pass with Jadon Haselwood.

“Obviously, on our fumble, we’ve talked about it,” he said. “We’ve had that situation before, and it goes back for a touchdown. A field goal. Might not be that big a deal if you miss it early in the first quarter. Each play really matters.

“We’re going to not make a mountain out of a mole hill. We should have played better. We should have not made those mistakes, but we have to move on and learn from it. If we can do that, we will be fine.”

No Drew for you

Junior linebacker Drew Sanders is not expected to be included in media availability for the Razorbacks this week. Sanders, a five-star prospect from Denton, Texas, who is tied for the FBS lead with 5.5 sacks, signed with Alabama but transferred to Arkansas last winter after two seasons with the Tide.

“We’ll try to downplay that … because it’s just about shedding blocks and tackling and doing his assignment,” Coach Sam Pittman said about the Sanders versus his old team angle.

“Drew was a good player when he was here,” Saban said. “Unfortunate injuries. And he’s certainly playing well for them. It’s good to see that he’s doing a good job for them. We’re happy for him and his family.”

Sanders has said he prefers to be utilized in a stand-up role as he has at Arkansas, rather than with his hand in the ground, as he was at Alabama.

When asked about Sanders playing “inside” at Arkansas, Saban replied, “That was probably what we were going to do but never worked out. It is what it is. It’s good for him that he can play both positions and that he’s doing well.

Alabama Coach Nick Saban seemed to take exception when a reporter asked Monday if there was a difference when scouting a team “after a loss,” which is the case when the Crimson Tide travels to Arkansas on Saturday after the Razorbacks fell 23-21 in heartbreaking fashion to Texas A&M.

“I don’t see their team ‘after they lost,’” Saban said as a correction. “I see the game. I see how they lost.

“I’m sure they’re very disappointed. I’m sure they’ll be upset with the way the game ended, the outcome of the game. Whether it was the fumble where they had a chance to go in and score a touchdown and it got returned 98 yards or whatever for a touchdown, which is like a 14-point swing.

“But I don’t really control how the other team thinks or what they do. I think the key for us is to play the best that we can play and not allow the other team to get well when they play us because of how we play.”

Coach Sam Pittman confirmed on Monday that cornerback LaDarrius Bishop is out for the remainder of the season after needing surgery to repair cartilage in his knee that will require three to four months of recovery.

Bishop, a redshirt senior from Ashdown, has one season of eligibility remaining. He had played in two games at cornerback and as a gunner on the punt return team and had 2 tackles through the Razorbacks’ 44-30 win over South Carolina.

“It was loose and they were able to sew it back in there and repair it, so that’s what we wanted for him,” Pittman said.

Bishop and safety Jalen Catalon were both lost for the season during the first two games and nickel back Myles Slusher missed two games in the depleted secondary before returning against Texas A&M.

Sam Pittman believed Cam Little was going to make his field goal with 1:35 remaining against Texas A&M. He proved it by using his final timeouts on the last two plays before the kick, milking as much time as possible from the clock.

The first timeout came prior to a third-and-14 call, just after Ricky Stromberg’s snap bounded low and tailback Raheim Sanders covered it in traffic for a 9-yard loss. After KJ Jefferson ran for 1 yard to set up fourth and 13 at the Texas A&M 24, the Razorbacks used another timeout.

When Little missed the 42-yard field goal on an improbable bounce off the top of the right goal post, the Razorbacks had no timeouts left to try to force a late punt by the Aggies.

“You know, the only question I had there at the end was I let the time run down to call a time out,” Pittman said on Saturday. “And there was no question in my mind we were going to make it. And I was just trying to get all the time off.

“But in hindsight if we’d had two, maybe they’d have had to punt. And maybe we’d have had opportunity. But that one there, now that we didn’t make it, I certainly question it.”

The Arkansas at Mississippi State game on Oct. 8 will kick off at 11 a.m. and will be broadcast on the SEC Network, the SEC office announced on Monday.

Arkansas, which leads the series by an 18-13-1 margin, has won two straight against the Bulldogs. The Razorbacks’ 21-14 win in Starkville, Miss., in 2020 broke the Razorbacks’ 20-game losing streak in conference play in Coach Sam Pittman’s second game.