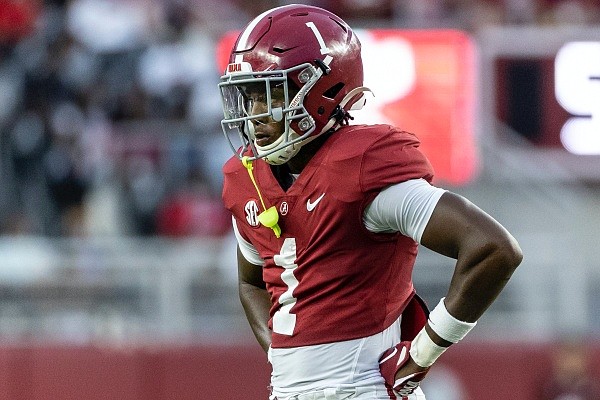 Alabama defensive back Kool-Aid McKinstry (1) during an NCAA football game on Saturday, Sept. 3, 2022, in Tuscaloosa, Ala. (AP Photo/Vasha Hunt)

FAYETTEVILLE — In 4 games this season, Alabama’s defense has given up 2 touchdowns and 5 field goals.

That is the extent of the offensive success opponents have enjoyed. As a result, a big emphasis is placed on the punting aspect of opponents' special teams given the high volume of fruitless drives.

And it brings onto the field one of the Crimson Tide’s best playmakers in return man Kool-Aid McKinstry, a sophomore defensive back.

“He’s an elite returner back there,” Arkansas coach Sam Pittman said Wednesday. “Our coverage unit has been good. We’re well aware of him back there returning punts. We highly respect him.

The Razorbacks limiting or containing McKinstry figures to be at or near the top of the to-do list when No. 20 Arkansas and No. 2 Alabama meet Saturday in Reynolds Razorback Stadium.

The Crimson Tide have long had one of the premier return units in college football, taking at least one punt for a touchdown in each of the last five seasons. Alabama had two such scores in its Week 3 victory over Louisiana-Monroe.

And it racked up 262 punt return yards against the Warhawks, the program’s most in a game since at least 2009. The Crimson Tide finished with 272 return yards in 15 games last season.

McKinstry is Alabama’s clear No. 1 when it comes to returning punts, and for good reason. To this point, he leads the FBS with 244 yards on 14 returns. Nine of those chances came in the last two games, and he netted 227 yards.

“Watching (McKinstry) is, honestly, really fun,” Crimson Tide quarterback Bryce Young said. “He’s super electric. He makes a lot of plays and he’s been able to change the field position multiple times. It’s so important when you think you’re getting the ball at the 20 to 25, now you’re getting it at the 40, the opposing 40.

“For us as an offense, the play calling, it changes everything. It gives us a way better chance of scoring and puts us in a great situation. Being able to watch that from the sideline has been a lot of fun.”

Standout edge defender Will Anderson added that he and other Alabama defensive players have begun taking in McKinstry’s returns together.

“We’re like, ‘Let’s go see what Kool-Aid is going to do on this drive,” Anderson said. “He’s actually got a little shake-and-bake to him, believe it or not, so when we watch him everybody will be on the sideline laughing the whole time because he gets out and can move really well.

The Razorbacks’ punt coverage has largely been sound in the last three games. Missouri State finished with one return for 18 yards in Week 3, and South Carolina and Texas A&M were shut out yardage-wise.

Max Fletcher, an Australian and Arkansas’ first-year punter, has been up and down this season. Pittman acknowledged punting must improve moving forward.

Fletcher is averaging 37.2 yards per attempt this season and 36.1 in two SEC games. The Razorbacks rank last in the SEC in average punt distance.

Reid Bauer, Arkansas' backup punter, had a pair of 50-yard punts at Alabama last season and another that was downed at the 2. He has not yet played this season.