Razorbacks have great trust in Dubinion 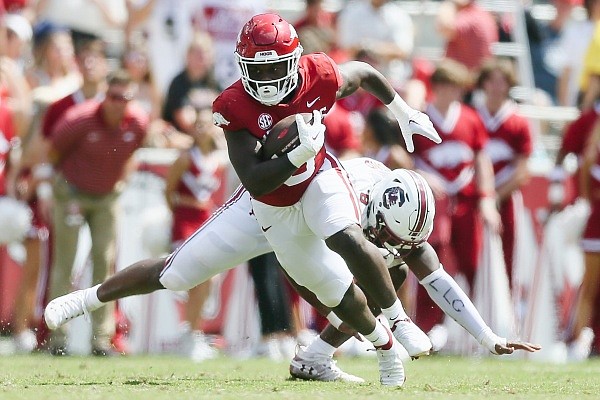 Arkansas running back Rashod Dubinion (6) carries the ball, Saturday, September 10, 2022 during the fourth quarter of a football game at Donald W. Reynolds Razorback Stadium in Fayetteville.

FAYETTEVILLE — Early in the fourth quarter of last Saturday’s game against Texas A&M, Arkansas called on one of its young running backs for a critical sequence of plays.

As the Razorbacks trailed 23-14, and after a pair of first downs, freshman Rashod Dubinion took the field alongside quarterback KJ Jefferson. Given the magnitude of the series, it came as something of a surprise that leading rusher Raheim “Rocket” Sanders was not in the lineup.

But Dubinion, an Ellenwood, Ga., product, fared just fine. And his poise and production likely earned him additional snaps in the near future.

He carried twice on the drive and gained 17 yards. Both touches went for a first down, and Dubinion’s first, which went for 14 yards, featured a show of toughness, a quick up-field jump cut and at least three broken tackles.

More from WholeHogSports: Limiting McKinstry's returns a top priority for Razorbacks vs. Alabama

The Razorbacks soon scored to cut the Aggies’ lead to 23-21.

“His running style is very unique,” Arkansas coach Sam Pittman said Wednesday. “And we trust him. It certainly does show him a lot of trust there and I was glad that he got those carries in those critical situations, because we believe in him.”

For the season, Dubinion has rushed 14 times for 54 yards and 1 touchdown, and caught 1 pass for 29 yards. His score came in the Razorbacks’ SEC opener and Week 2 victory over South Carolina.

With Dominique Johnson back from a knee injury and again in the mix at tailback, Arkansas’ offensive staff is working to figure out the most effective way to split carries among four capable runners. Pittman added Wednesday that Dubinion is the player in the group he would like to see more of in game action.

“He certainly had a couple of really nice carries in the A&M game, and that’s the one we probably need to learn a little bit more about,” Pittman said. “I’ve been extremely pleased with him. He can cut on a dime, and I think he’s going to be a really good player for us.

“He is now, but I think he’s going to be a really good running back for us.”

Dubinion, who stands 5-10 and 211 pounds, is a player who flashed numerous times in spring drills and preseason practices. He has been described by Pittman as a change-up back.

Another plus for Pittman is that Dubinion is not an academic or disciplinary concern and is routinely punctual.