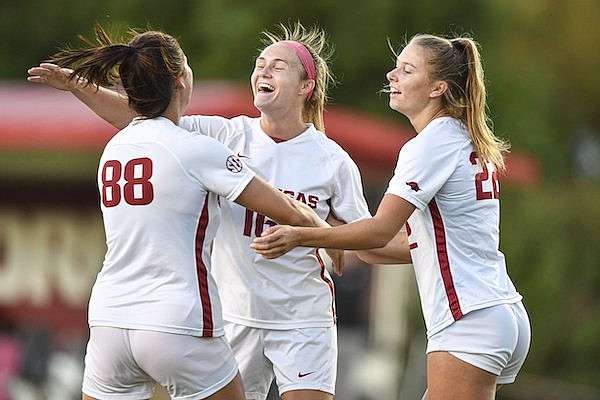 Arkansas forward Anna Podojil (center) is congratulated by teammates after scoring a goal during a game against Texas A&M on Thursday, Sept. 29, 2022, in Fayetteville.

All-America forward Anna Podojil put the 12th-ranked Razorbacks ahead of Texas A&M with a weak-footed volley from the 6-yard box with 18 seconds left in the first half.

Arkansas (8-2-1, 3-1 SEC) crowded the 18-yard box for a designed play off a throw-in from the attacking third. Podoji latched onto a flicked header from Bea Franklin.

“We pride ourselves on set pieces,” Podojil said. “We’ve been working on that throw-in play the entire season.

The goal was the 42nd of her career and her 14th game winner, which tied the school record. She is two goals shy of tying Julie Williford as Arkansas’ all-time top goal scorer.

The victory was the Razorbacks’ third straight 1-0 victory against an SEC opponent. Arkansas coach Colby Hale said he was pleased but not content with his team’s recent offensive performance.

“We are never going to be satisfied," Hale said, "but winning is hard in the SEC."

The Aggies (5-5-2, 0-4) never threatened to put the ball past Arkansas goalkeeper Grace Barbara. They mustered just four shots, three of which came in the first half and only placed one on target.

Barbara has not allowed a goal since a 2-0 loss at Mississippi State on Sept. 16. Her shutout streak increased to 280 minutes.

“They didn’t even really sniff the goal,” Hale said. “They didn’t have any real chances. I thought we were the better team defensively.”

The bad breaks continued for the visitors in the second half. Texas A&M defender Katie Smith was helped off the field by the training staff and did not return after a collision in the 57th minute.

Freshman defender Ella Riley received a yellow card after a mistimed tackle in the 24th minute. Hale displayed supreme confidence in his inexperienced defender by playing her all 90 minutes despite the heightened threat of ejection.

Arkansas out-shot Texas A&M 17-4 and is 7-0 when attempting more shots than its opponent.