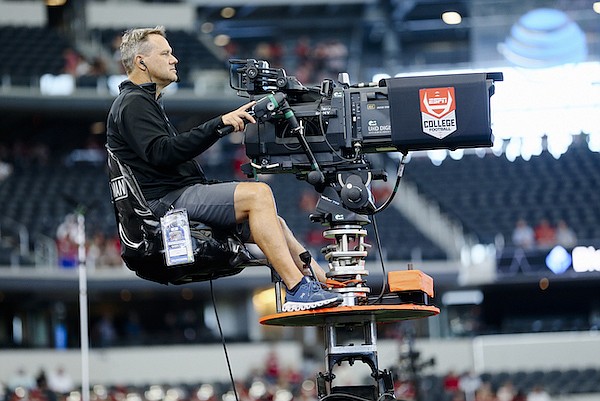 An ESPN cameraman is shown prior to a game between Arkansas and Texas A&M on Saturday, Sept. 24, 2022, in Arlington, Texas.

The Aggies’ 23-21 victory over the Razorbacks at AT&T Stadium averaged 3.5 million viewers on ESPN. A peak audience total was not available.

It was the Razorbacks’ most-watched game this year, eclipsing an audience of 2.9 million for Arkansas’ 31-24 victory over Cincinnati on Sept. 3.

CBS had the week's most-watched game between Tennessee and Florida, which averaged 5.5 million. The Volunteers won 38-33 after holding off a fourth-quarter comeback by the Gators.

The 20th-ranked Razorbacks are likely to play in front of a larger audience Saturday when they host No. 2 Alabama on CBS.