Horses to feed: Hogs 'challenged' by having so many weapons 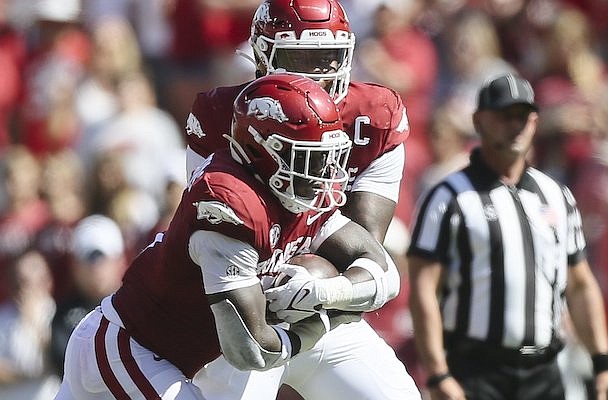 Arkansas quarterback KJ Jefferson (behind) hands to running back Raheim Sanders during a game against South Carolina on Saturday, Sept. 10, 2022, in Fayetteville.

FAYETTEVILLE — Recruiting and roster building have helped the 2022 Arkansas Razorbacks assemble one of their most impressive sets of offensive skill players in decades.

Judged on speed, height, power, vision and play-making ability, the group could compare favorably with any set of skill players in University of Arkansas history.

The newest challenge for the talented No. 20 Razorbacks (3-1, 1-1 SEC) comes Saturday against No. 2 Alabama (4-0, 1-0), which historically boasts one of the nation’s top defenses under Coach Nick Saban and is currently second in total defense.

Working with the aid of a strong offensive line, the Razorbacks rank 26th in total offense with 479 yards per game, ninth in rushing (243.8) and 55th in scoring (33.5 points per game).

While the Razorbacks are 78th in passing with 235.2 yards per game, their efficiency number is 14th, meaning Jefferson has a strong completion percentage (.691), touchdown-to-interception ratio (8-1) and yards per attempt (9.7).

However, there’s a bit of a problem.

There being only one football available, Briles has had to be creative in scheming ways for Jefferson to distribute the touches.

“I mean, we have weapons everywhere,” Knox said. “Sometimes it gets hard to feed that many horses, man. Like, it’s just a lot of people.”

Arkansas Coach Sam Pittman, speaking Wednesday about Johnson’s return from a knee injury last week with five carries, said it would be difficult to get all the tailbacks the touches the coaches would like to see.

“And when you have four backs, it’s just hard to get a guy a lot of reps because I can tell you, I feel like AJ Green is much better than he was last year.

“We just have a lot of backs … to be honest with you. And it’s kind of hard to figure out because, in my opinion, there’s not … Rocket would be that standard there, and then the other three have something different to offer us, and it’s hard to get them all the carries.”

Saban said he sees the improvement in Sanders, who had a 17-yard touchdown reception at Alabama late in the game last season.

“He’s strong, physical and does a nice job of reading plays and making the right cuts,” Saban said. “He runs behind his pads and has good contact balance. He’s a good all-around player and a physical player.”

Saban has also been impressed with the Arkansas attack.

“This is a very dangerous team we’re playing in Arkansas,” he said. “They have a very, very good team.

Johnson’s addition to the active tailback crew could be described as a good problem to sort for running backs coach Jimmy Smith and Briles. Through four games, Sanders has taken 61% of the non-quarterback runs, and he ranks fourth in the nation with 127 rushing yards per game.

Smith had talked about Sanders rolling at about 50% of the running back carries, and the sophomore sounds willing to share the load, particularly with Johnson, last year’s starter, possibly back in the groove.

“Last week with everybody getting touches, I love it,” Sanders said. “I like to see everybody eat, no matter what it is. That was great, and he’s healthy. He’s getting that trust back in his cutting and all that. I’m loving it.”

Last year’s game against the Crimson Tide, a 42-35 Alabama victory in Tuscaloosa, Ala., is instructional for Briles in terms of ball distribution.

Jefferson completed passes to nine different players and six Razorbacks had rushing yardage for an Arkansas attack that amassed 468 yards. That was 164 more yards than the Crimson Tide allowed on average.

Burks and Kern are both gone, but Sanders pulled the Razorbacks within a touchdown with 1:02 remaining and was one of four Arkansas ball carriers to have a rushing play of 12-plus yards.

“I think the thing we did last year that allowed us to get the ball to Burks and Warren Thompson … and Trey Knox … is we ran the ball pretty well,” Pittman said. “And for us to have offensive success, we don’t have to run the ball a lot. We just have to run it when we want to.

“And that can open up a lot of things for us. We did a decent job a year ago of that, and certainly we have to do it again.”

Some Arkansas fans wondered why the Razorbacks got away from their bread-and-butter zone read scheme on a couple of series.

“Hopefully you try to get success on both [run and pass], but our problem right now — it’s not a problem — but we have a lot of good wideouts, we have a lot of good running backs,” Pittman said. “Getting each one of them carries and things of that nature. We’re just trying to win the game.”

The Razorbacks lost five yards on a lateral to Haselwood early in the fourth quarter, on which it appeared he was looking to throw a pass. However, Arkansas made up the lost yardage on a 9-yard reception by Haselwood and Jefferson’s 6-yard keeper on fourth and 1.