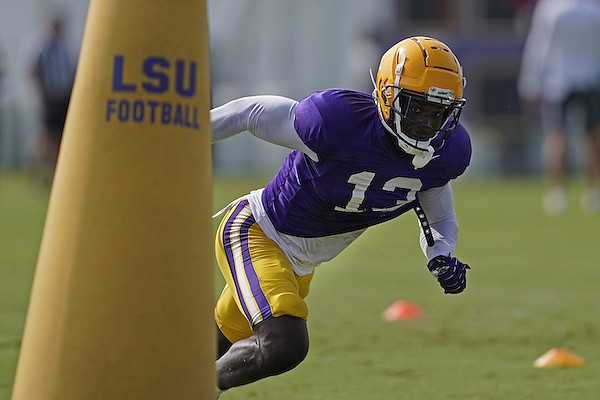 It’s taken longer than expected, but safety Joe Foucha will finally make his LSU debut Saturday when the Tigers play at Auburn.

Foucha, a senior who transferred after playing at the University of Arkansas for four seasons, was suspended for the first four games because of an academic issue.

Foucha, who is from New Orleans, met with media members Tuesday after practice to discuss playing his first game for LSU.

“It feels great,” Foucha said. “The four weeks I was out I was still preparing every day like [for] a game.

“Now that I finally got the opportunity to play Saturday, I’m just ready to go.

“It’s an SEC game so I’m definitely excited to kick off the SEC schedule. It’s definitely going to be a big game for me because it’s my debut.”

Foucha played in 44 games at Arkansas, including 33 starts, and had 231 tackles, 19 pass breakups and 5 interceptions.

“He has been actively involved,” Kelly said. “He has been involved in any articulation between our offense and defense that hasn’t involved game plan, which is quite a bit.

“Over the past month, when we got ready for team time for our opponent, he would come over onto scout. He was a pain to deal with because he was so good playing so hard as a scout team member that he made us better.

“So I’ve been able to see first-hand his action on a day-to-day basis, and he will be ready to play right away.”

Foucha again will be playing in the same secondary with Greg Brooks Jr., his teammate at Arkansas and also a Louisiana native who transferred after last season

Brooks, a senior playing safety for the Tigers after being a nickel back for Arkansas, has 16 tackles to rank fourth for the Tigers.

“The story couldn’t have gone any better,” Foucha said of his continued connection with Brooks. “It’s a beautiful thing to see.

“Being at Arkansas and now we’re here, it brought us even closer together.

“Every day, day in and day out, just being on the practice field together, I feel like I know where he’s at and he knows where I’m at.

“We give each other that spark on the field when we’re playing with each other.”

Foucha’s return couldn’t come at a better time for the Tigers because safety Major Burns will miss the Auburn game, and could be out for several weeks, with a neck injury.

Texas A&M senior receiver Ainias Smith made one of the biggest plays in the Aggies’ 23-21 victory over Arkansas last Saturday.

The Aggies faced second-and-30 from the Razorbacks’ 46 in the third quarter when quarterback Max Johnson passed to Smith for a 32-yard gain.

Four plays later, Texas A&M got a 31-yard field goal from Randy Bond to increase its lead to 23-14.

Unfortunately for Smith and the Aggies, it turned out to be his last catch this season. On Texas A&M’s next possession, Smith suffered a season-ending leg injury while blocking downfield.

Fisher declined to be specific about the injury, but Maurice Smith told the Bryan (Texas) Eagle his son suffered a bone fracture.

Smith finished the season with 15 receptions for 291 yards and 2 touchdowns.

A fourth-year player, Smith could opt to return next season or enter the NFL Draft. He’s eligible to redshirt having been limited to four games this season and also could take advantage of the extra year granted by the NCAA because of the coronavirus pandemic.

With the loss of Smith, freshman Evan Stewart is Texas A&M’s leading receiver with 13 catches for 141 yards.

South Carolina’s game against South Carolina State has been moved to a 6 p.m. kickoff today from its originally scheduled Saturday start to avoid potential weather issues resulting from Hurricane Ian.

“I’m pretty sure the Cockpit will be full,” Rucker, referring to the South Carolina student section, told reporters Tuesday according to The State newspaper. “College students really look for any reason to drink, so they’ll be there and be loud and rowdy.

“Overall, I think it’ll be a good atmosphere.”

Kentucky senior running back Chris Rodriguez, who has 2,736 career rushing yards, will be back for Saturday’s game at Ole Miss after being suspended the first four games for an undisclosed reason.

“We’re excited to get Chris back,” Wildcats Coach Mark Stoops said. “Obviously he’s a very good football player that has a lot of experience, and we’ve been inconsistent in the run game.”

Kentucky ranks 13th in the SEC in rushing offense, averaging 81.5 yards per game and 2.4 per attempt.

“That’s not all on the running backs,” Stoops said. “It’s everybody around them needing to play more consistent.

“But hopefully Chris helps provide that spark we’re looking for in the run game.”

Rodriguez practiced during his suspension.

“Chris has been practicing with us, so he shouldn’t be too rusty,” Stoops said. “He’s spent some of that time on the scout team, so he’s been hit and thudded.

“We all know games are different, but hopefully he’ll hit the ground running this week.”

Missouri senior running back Nathaniel Peat’s longest run of the season ended in disaster for the Tigers.

Peat was credited with a 20-yard run last Saturday at Auburn, but he lost the ball inches short of the goal line as he dropped it trying to extend it over the goal line.

The ball went into the end zone and was ruled a touchback. Instead of Peat scoring a game-winning touchdown, Auburn held on to beat Missouri 17-14 in overtime.

“There’s really no more to say about it. It was a mistake. We all learn from it. We all grow from it and move on.”

“Those things don’t have to define you,” Drinkwitz said. “They can help shape you and mold you to being the person that you want to become. And as a football coach, my job is to win football games, but also to help young men develop into their full potential.”

Peat is from Columbia, Mo., and played at Rock Bridge High School, less than a mile from the Missouri campus. But he signed with Stanford and played for the Cardinal three seasons before transferring to his hometown.

Mississippi State junior quarterback Will Rogers completed 38 of 49 passes for 406 yards and 6 touchdowns in the Bulldogs’ 45-14 victory over Bowling Green last Saturday.

It was Rogers’ seventh game with more than 400 passing yards, tying an SEC record set by Kentucky quarterback Tim Couch during the 1997 and 1998 seasons.

Sunday football usually is all about the NFL, but there will be a college game on the schedule.

Florida’s home game against Eastern Washington at The Swamp is being moved to 11 a.m. Sunday because of the weather threat posed by Hurricane Ian.

“A lot of people are in our thoughts and prayers as we prepare for the hurricane,” Florida Coach Billy Napier said. “We look forward to the opportunity to get in The Swamp and compete on Sunday and are thankful for all the people who are helping to make that happen.”

Napier didn’t want to discuss how he thinks playing the game on Sunday might impact attendance.

“I think probably most important here is that we get through the next couple of days safely,” Napier said. “The focus is on preparing for the storm and staying safe. Once the storm passes, we’ll focus on what game day looks like.

“I know that we’re going to have some wind and significant rain here, but we’ve got a lot of people in our state that are in for a rough ride.”

Playing on Sunday means Florida will have one less day to prepare for next week’s game against Missouri, but that will also be a home game for the Gators.

Three Tennessee players have had 100 plus yards in receiving the past three games.

The latest was Bru McCoy, who had five catches for 102 yards in the Volunteers’ 38-33 victory over Florida last Saturday.

Cedric Tillman had nine catches for 162 yards when Tennessee won 34-27 at Pittsburgh in overtime on Sept. 10.

A week later, Jalin Hyatt had five catches for 166 yards in Tennessee’s 63-6 victory over Akron.

Levis, in his second season after transferring from Penn State, is playing his way into a first-round NFL Draft choice. He’ll get another chance to impress scouts when the Wildcats play at Ole Miss.

ESPN’s Mel Kiper rates Levis as his No. 4 draft prospect overall and the No. 2 quarterback behind Ohio State’s C.J. Stroud.

For the first time in 64 years, Kentucky and Ole Miss will meet with both teams nationally ranked.

The teams will be hard-pressed to top a 2020 thriller at Kentucky, when the Rebels won 42-41 in overtime.

“This is college football, as good as it gets. Rocky Top’s back. Let’s go!”

“You don’t hear cowbells anywhere else.”

“The only people that’s stopped them is themselves.”

“There’s so much energy and time and passion put into these games. To come so close and to lose … it’s heartbreaking. It’s tough. But this is going to be a resilient team.”