Arkansas vs. Alabama: How to watch and listen, forecast, betting line, team comparisons 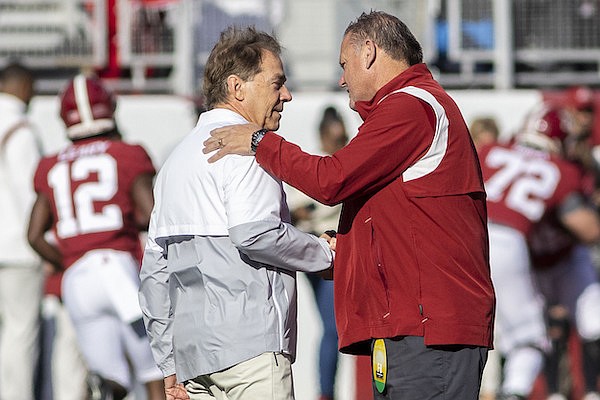 WHERE Reynolds Razorback Stadium (76,412) in Fayetteville

SERIES Alabama leads 25-7 in on-field matchups. Two of the Crimson Tide's on-field victories were later vacated and one was forfeited, and the series record according to the schools is 22-8.

RADIO Razorback Sports Network can be accessed through local FM and AM affiliates, via the Arkansas Razorbacks Gameday app, via the TuneIn app, via the Varsity app or on ArkansasRazorbacks.com. Blackouts may apply. The Arkansas radio broadcast will be carried on XM Ch. 190.

TELEVISION The game will be televised by CBS and can be streamed via the Paramount-Plus app (subscriber login required).

WEATHER According to the National Weather Service, Saturday will be sunny with a high of 79 degrees in Fayetteville.

NOTABLE Arkansas' 15-game losing streak to Alabama is the Razorbacks' longest to any one opponent. Arkansas last defeated Alabama 24-23 in double overtime in 2006 and has not beaten the Crimson Tide since Nick Saban was hired as the team's head coach....Saban has an 18-2 all-time record against Arkansas, which includes games as coach at LSU from 2000-04. Saban-coached teams have won 17 straight against the Razorbacks....Arkansas linebacker Drew Sanders leads college football with 5.5 sacks in his first season after transferring from Alabama. Sanders was named the Butkus Foundation's national linebacker of the month for September....Arkansas running back Raheim Sanders leads the SEC with 508 rushing yards....Alabama quarterback Bryce Young is the reigning Heisman Trophy winner. Arkansas has never beaten a team with the Heisman winner from the year before....Arkansas is 8-1 at home in the past two seasons, including 3-0 this year....Alabama has defeated three opponents (Utah State, Louisiana-Monroe and Vanderbilt) by at least 52 points this season. The Crimson Tide defeated Texas 20-19 on the road in Week 2.