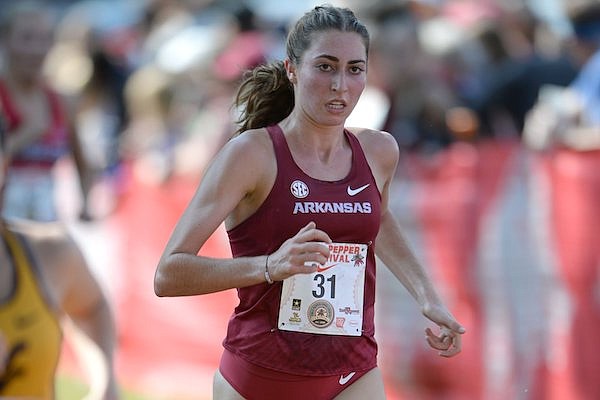 Arkansas' Isabel Van Camp comes in to the finish Saturday, Oct. 5, 2019, during the Chile Pepper Cross Country Festival at Agri Park in Fayetteville.

FAYETTEVILLE — Lance Harter, the University of Arkansas women’s cross country coach, first took notice of Isabel Van Camp when she won the high school division of the Chile Pepper Racing Festival on the UA’s Agri Park course in 2018 as a senior at Keller (Texas) High School.

“When I watched Isabel run, I said, ‘Oh, I need to track this kid down and start recruiting her,’ ” Harter said. “That worked out well for us.”

Van Camp, a junior who has earned All-American honors three times in cross country and track and field for Arkansas, will lead the No. 13 Razorbacks in today’s collegiate women’s race on the same UA course she won as a high school runner.

“It would be kind of cool if Isabel could win again, this time for the Razorbacks,” Harter said.

The Chile Pepper, in its 34th year, will be the lone home cross country meet for the UA women and No. 16 men’s teams this season.

“It’s always nice to be home,” Arkansas men’s Coach Chris Bucknam said . “The weather is going to be beautiful. We’ll go out and run hard and see where we’re at.”

It will be the second meet for the Arkansas men this season and the first in which they run with a full roster.

Tulsa, ranked No. 5, figures to be Arkansas’ main competition for the team title.

“I want our kids to go out and compete and see where we’re at,” Bucknam said. “We’ll see if we can put a team together to win another SEC title.

“We’ve got some young kids that have to step up and fill a big void.”

Harter said he plans to run a full team today with the possible exception of senior Katie McCune, a senior transfer from Drury College who has a foot injury.

Harter said he likes that the Agri Park course is similar to the Ole Miss course where the SEC Championships will be held on Oct. 28.

“This is perfect for us to prep for the SEC meet,” Harter said. “This course is an exact parallel of what we’ll see at Ole Miss, so it’s a great opportunity to rehearse what we ultimately want to do in the SEC meet.”