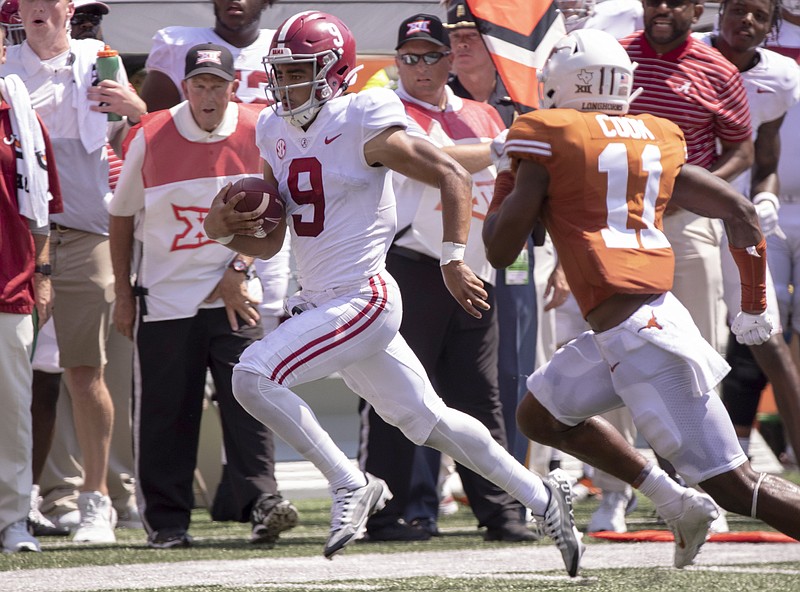 Alabama quarterback Bryce Young (9) is chased out of bounds by Texas defensive back Anthony Cook during the second half of an NCAA college football game, Saturday, Sept. 10, 2022, in Austin, Texas. Alabama defeated Texas 20-19. (AP Photo/Rodolfo Gonzalez)

FAYETTEVILLE — Running quarterbacks Jason Shelley and Max Johnson have given the University of Arkansas defense trouble the past two weeks.

That begs a question: What kind of issues will reigning Heisman Trophy winner Bryce Young present to the Hogs’ dinged-up defense when No. 2 Alabama comes calling Saturday at 2:30 p.m.?

Young ranks with Ohio State quarterback CJ Stroud as the current Heisman Trophy favorites. The 6-0, 194-pound junior from Pasadena, Calif., has completed 83 of 121 passes for 1,029 yards, with 13 touchdowns and 2 interceptions.

He has also rushed for 150 yards and two touchdowns, on pace for bigger rushing numbers than last season, when his 293 yards gained were completely neutralized by 293 yards in sacks and other losses.

The Razorbacks understand that much like their offense revolves around quarterback KJ Jefferson’s reads and decisions, the Alabama offense typically goes as Young does.

“He’s a great quarterback,” Arkansas nickel back Myles Slusher said. “He can make every throw a quarterback can make. He knows how to read the defense. And he can use his legs, too.

“He’s more of a threat than just passing, so we just have to be prepared for him this week while we’re at practice.”

Young destroyed the Razorbacks with 559 passing yards and five touchdowns last season in the Crimson Tide’s 42-35 win at Tuscaloosa, Ala. Alabama scored on seven of its 11 possessions in that game, excluding clock-killing possessions at the end of each half.

The Razorbacks managed to sack Young four times and he wound up with minus-11 rushing yards.

Because of games like that, Arkansas Coach Sam Pittman and defensive coordinator Barry Odom decided to activate more blitzes and more pressure this season. The results have been a mixed bag.

The Razorbacks lead the country with 20 sacks, but they also have allowed 302.5 passing yards per game to rank 126th among the 131 FBS teams.

“A really good unit, very well disciplined,” Young said. “You know, they have a lot of talent, top to bottom. It’s really a talented roster. And you can tell how well they communicate, do some different things, multiple things, but you could tell they’re always on the same page.

“So very well-coached … I think they were really a good unit last year, and you can see how they’ve even gotten better and improved this year throughout the games they played. So, again, we know it’s going to be a really big challenge for us.”

Young operates behind another quality Alabama offensive line and he has all types of weapons at his disposal. The skill crew is led by Georgia Tech transfer Jahmyr Gibbs, who ranks second on the team in both rushing (172 yards) and receiving (187). Gibbs has three touchdowns, all receiving.

Jase McClellan is the Tide’s leading rusher with 245 yards, 2 touchdowns and a beefy 8.4 yard rushing average. Young’s yards per carry, with sacks included, is even higher at 9.4.

Pittman noted Young is running more and has the uncanny knack of turning potential lost-yardage plays into momentum-swinging plays.

“He’s got a lot of confidence in everything he does,” Pittman said. “Whether he’s throwing or whether he’s scrambling, he’ll stay in the pocket until the last second. When he gets outside the pocket he just looks comfortable, like ‘I could run it for a touchdown, I can throw it for a touchdown. I’m just going to do whichever one I decide to do.’

“He’s been so hard to tackle for the teams he’s been playing. Texas is only team really that put much pressure on him at all and they did pressure him well. But I just think he’s playing with an extreme amount of confidence.”

Pressuring Young will have to be part of the Arkansas defensive plan.

“It’s really going to be a crucial part of the game,” Domineck said. “He can read a defense. … So just being able to contain him and keep him in the pocket while also affecting his throws will help us a lot on defense.”

The Tide have passed for 1,130 yards and rushed for 940 yards, while Arkansas has 941 passing yards and 975 rushing yards through four games.

“The simple fact is that they do throw a lot,” Domineck said. “We’ve noticed in their tendencies that they do like to throw. They’re more of a throwing team now, especially on first and second down.

“We’ve just got to make sure we keep him in the pocket, keep him contained. Can’t let him use his legs. We’ve got to cut out his main strengths of the game. That’s what our focus is. That’s what our goal is, to get to him. Disrupt him. Get in his face. Just make it easier on the back end for our defense.”