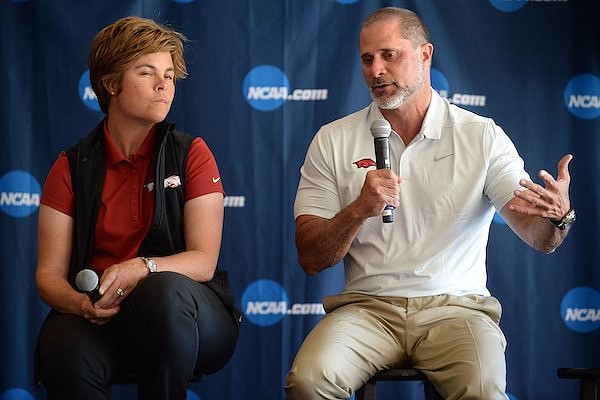 FAYETTEVILLE — Long-time University of Arkansas golf coaches Shauna Taylor and Brad McMakin are on target to stick around for a while longer.

Both McMakin and Taylor have signed five-year contract extensions that will increase their salaries to $230,000 per year and take them through June 2027. The contracts include an extra $25,000 each per year for speaking fees, plus incentive clauses for SEC and NCAA performances, for winning coach of the year honors and for the academic achievements of their players.

“The tremendous success that our men’s and women’s golf programs have enjoyed in the past decade and a half is directly attributable to the leadership of Shauna Taylor and Brad McMakin,” Yurachek said in a statement. “The consistent excellence of both our men’s and women’s programs has firmly established the University of Arkansas as one of the prime destinations for collegiate golf.

“Few programs in the country are fortunate to have two long-time coaches who have continued to raise the bar of success, even while competing in the premier conference in the nation.”

Taylor, in her 16th season as head coach after serving as an assistant prior to that, has led the Razorbacks into an NCAA regional every year, extending the program’s streak to 19 consecutive years. A two-time SEC coach of the year (2014, 2018), she has produced two NCAA individual champions in Stacy Lewis and Maria Fassi, and led the program to its first SEC title in 2018.

The Razorbacks have produced 13 players who turned professional during her tenure, including five who are still on the LPGA Tour — Lewis, Fassi, three-time LPGA tour winner Gaby Lopez, Alana Uriell and Brook Matthews of Rogers.

“When I got here, I thought I’d be here a minute, but it’s been 20 years now,” Taylor said. “My family and I have put down roots here. It’s been exciting to build our program.”

McMakin, in his 17th season as head coach, is coming off a ninth-place finish at the NCAAs with four returning starters, led by All-American senior Mateo Fernandez de Oliveira. The Razorbacks have qualified for 14 consecutive NCAA regionals and advanced to the NCAA championships eight times, including a runner-up showing in 2009 and top 11 finishes each of the past two years.

Arkansas won the 2019 SEC championship and finished runner-up to Vanderbilt last year. The Razorbacks have won 30 tournaments under his watch and produced 21 players with All-America honors. Seven Razorbacks have reached the PGA Tour during his tenure.

“I’m super excited,” McMakin said. “I’m very grateful to Hunter for extending my contract. I feel like we’ve had a good run over the last 12 years here and had a golf team that’s made everybody proud.

“I want to be here and I’m just fortunate he’s given me the opportunity to stay here and maybe retire one day. … This has been a great place to raise our family. We’ve never had any reason to want to leave.”