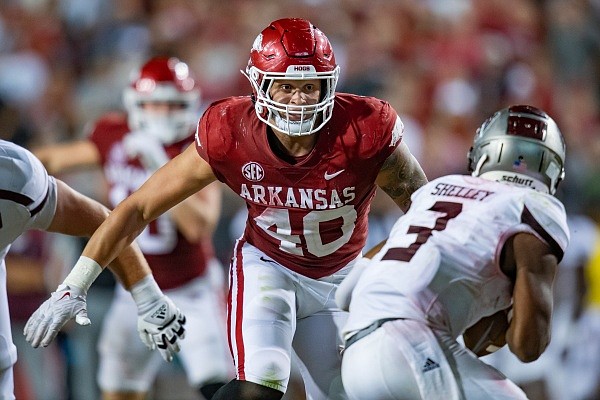 FAYETTEVILLE — Katie Peek remembers like it was yesterday her oldest son insisting that he did not want to begin his freshman year at Gilmer (Texas) High School.

Jeff Traylor, who served as Arkansas’ running backs coach from 2018-19 and is now in his third season of a successful stint as head coach at Texas-San Antonio, had recently left Gilmer after a decade-and-a-half run as head coach to become a college assistant. Understandably, Landon Jackson, Peek’s son, wanted to weigh his options.

The summer ahead of his eighth-grade year, Jackson, who had lived in Gilmer for two years, opted to stay with his father, Larry, in Texarkana, Texas. It was there that they approached Pleasant Grove High School football coach Josh Gibson about Jackson joining the high school team for summer workouts.

He was given the green light. But one key question had not been thought through: How would Jackson get to campus?

His father routinely left for work early each morning. And if Jackson caught a ride from Peek, it would force his mother to wake up well before sunrise and drive him more than one hour one way.

Jackson took matters into his own hands. Peek said her firstborn regularly walked 1 1/2 miles from his father’s home in order to attend the workouts. The laser focus and dedication paid off in the end.

The following year, as a freshman in 2017, Jackson was named Texas District 7-4A-II defensive newcomer of the year and aided Pleasant Grove in its state championship run.

More from WholeHogSports: 11 keys to victory in Arkansas-Alabama

Jackson left his mark at Pleasant Grove, finishing his career with more than 45 sacks, including 17 as a junior in 2019, and multiple state titles. He grew into a 4-star prospect in the eyes of each recruiting service and the No. 7 defensive lineman nationally, according to 247 Sports.

After initially signing with LSU and playing on the Tigers’ special teams units in 2021, Jackson entered the NCAA transfer portal and landed at Arkansas, where he is beginning to make an impact for a program that he visited seven times during the recruiting process, Peek estimated. Her family is from the state, and to see her son in cardinal and white is a weekly pinch-me moment.

Peek joked that she wished Jackson would have selected the Razorbacks out of high school. LSU, however, was the school of choice over the likes of Alabama, Baylor, Florida State and Tennessee.

“I was totally on board,” she said of her son’s transfer to Arkansas. “I feel like he thought he was going to miss out on something, you know? He wasn’t able to take any (official visits). He had to make a decision pretty much sight unseen, so that was a lot to do with it.

“And I think he felt like maybe he had been to Arkansas so much and it was another high school to him. But come to find out that’s kind of what he wanted. He’ll even tell you that.”

Physically, Jackson stands out in a crowd on account of his height and the tattoos on his left arm that pop under the bright lights. He is listed on Arkansas’ roster at 6-7 and 274 pounds, and his size comes honestly.

Peek, who was a college volleyball player at McNeese State, stands 6 feet tall, and Jackson’s father is 6-11, a former basketball player from Connecticut who spent two seasons at Texas A&M. He left the Aggies’ program and transferred to McNeese State, where he met Peek.

Peek gave birth to Jackson during her sophomore year of college, medical redshirted then played her junior season before deciding as a senior to focus on raising her son.

More from WholeHogSports: Containing Bryce Young a tough task for the Razorbacks

“I think me and Landon did a lot of growing up together, and I think that’s why we have a different relationship,” Peek said. “It’s awesome. I’m glad he’s grown and I didn’t screw up too bad. Thank God.

“We’ve done everything. He calls me three to four times a day, and I think I’m there every weekend. It’s different. I won’t say we’re friends, because he definitely respects me, but we’ve got a different relationship. If I’m not coming somewhere he wants to know why. It’s that type of deal.”

Peek also used to prepare meals for Jackson. During his sophomore and junior seasons at Pleasant Grove, coaches wanted the lineman to bulk up and retain weight to aide his play on Friday nights.

Jackson, his mother said, was on a 4,500-calorie-per-day diet, and she prepared his food twice each week – on Sundays and again on Wednesdays.

“It’s ridiculous. He’s always had issues keeping weight on,” Peek said. “You’d probably be aghast if you heard what my grocery bill was.”

But each time she watches Jackson play the game he loves, the thought crosses her mind that everything the two have been through was well worth it. She had an idea Jackson might turn out to be something when in the second grade he demanded to play tackle football rather than flag, and later that year made a game-saving tackle in a championship game.

Her belief was cemented during Jackson’s freshman year at Pleasant Grove. She recalls a three-sack performance in the state title game.

He enters Saturday’s game against the Crimson Tide with 2.5 sacks, which are good for fourth on the team, and one forced fumble. Only six players in the SEC have more sacks at this point.

“When he first got here, he didn’t play near as fast as what he is right now,” Arkansas coach Sam Pittman said. “And now you’re seeing him jarring some tackles, jarring some tight ends. He’s always been able to run. The most important thing, in my opinion, as a defensive end is to have the body frame, but you have to get off the football.

“I think that’s the No. 1 thing that he’s improved on since he’s been here.”

Georgia Tech transfer defensive end Jordan Domineck, who is second on the team in sacks, sees Jackson as a great asset to Arkansas’ front.

“He’s been able to come into practice and just immediately make an impact,” Domineck said. “He is a very physical individual. He knows how to create speed to power on rushes. He’s able to hold a point, he’s able to set the edge and he knows how to contain. He’s been playing pretty well for us.”

When Jackson breaks through the line, it is not just offensive linemen, running backs and quarterbacks who wind up a bit battered and bruised. Those sitting around Peek, including two of her best friends, can at times take the brunt of her excitement.

She enjoys most seeing her son’s flashes of emotion after making a play.

“I’m punching whoever is beside me, so you probably wouldn’t want to sit by me,” Peek joked. “My husband won’t even sit by me. I don’t sit very well. I’m always standing, and when the game gets real close I usually pace. I’ll have to go up (the stairs) and come back down.

“I’m pretty impressed with his season, and he’s happy. Mom is happy. He’s doing good and he seems really happy, so that’s all I can ask for, for sure.”