UGA-TCU should be interesting title game 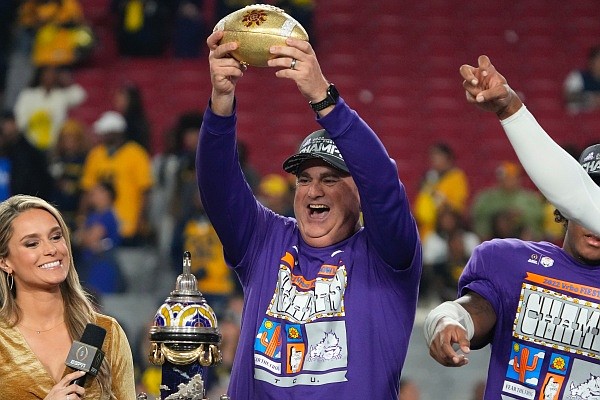 Going into this season, no one could have seen TCU playing for the national championship.

The Horned Frogs were coming off a 5-7 season that saw head coach Gary Patterson resign after eight games when told he would not return in 2022.

Patterson is the all-time winningest coach in TCU history with a 181-79 record.

After a regional search, SMU’s Sonny Dykes was hired, and while a truly nice guy with a great pedigree — his dad was Spike Dykes, known for leading Texas Tech to some of its better seasons — he had not set himself apart as a head coach.

His career record after stops at Louisiana Tech, California and SMU was 71-63.

Saying there were no expectations of this type of success is like saying it is going to be a while before the elf is back on the shelf. It was Week 6 of this college football season before TCU even broke into The Associated Press poll at No. 17.

A win over No. 18 Oklahoma sent the Horned Frogs from obscurity to the steps of the big stage.

By Week 10, when the first College Football Playoff poll was released, the Horned Frogs were No. 7, and the only team ahead of them with a loss was Alabama, which fell to Tennessee but two weeks later was beaten at LSU.

On the day TCU lost the Big 12 Conference Championship Game to Kansas State 31-28 in overtime, Nick Saban went on TV and said the selection committee should pick teams that were playing their best that day.

The committee did the right thing and made the Frogs the No. 3 seed, and, of course, on Saturday, they beat No. 2 Michigan 51-45 in a game that was exciting from start to finish. Incidentally, the Tide beat K-State 45-20.

The Wolverines won most of the stats except the one that means the most, although it did look like it took a page from the Kansas playbook when it had running back Donovan Edwards attempt a pass that went for a negative yard.

TCU, the only private school to make the CFP Championship Game (but don’t tell Ohio State it isn’t a private school), will face favored Georgia, the defending national champs who overcame a two-touchdown fourth-quarter deficit to beat Ohio State 42-41.

They appeared on the brink of losing on Saturday, trailing 38-24 going into the final quarter, and former walk-on quarterback Stetson Bennett, who is 28-1 as a starter, was having a pedestrian game.

In the final quarter, he completed 10 of 13 passes for 190 yards and 2 touchdowns plus a two-point conversion, while the heralded Bulldog defense finally put it together and held the Buckeyes to a single field goal.

No one is surprised Georgia rallied and made the championship game.

Since arriving in Athens, Smart, a big apple off the Saban coaching tree, is 80-15 overall with only six non-conference losses. In fact, the Bulldogs haven’t lost to a non-Power 5 school since 2011.

Smart, who makes $10.8 million a year compared to Dykes — who signed a new deal last month with a raise of $2 million to $6 million per year — will never be thought of as a media darling. Quite the opposite, in fact.

Dykes, on the other hand, is downright friendly to everyone, and while even he should be surprised by what he’s accomplished this year, the Horned Frogs are talented.

The biggest thing TCU lacks going into Jan. 9 is experience.

Georgia has been there and done that.

The last time TCU played for the national championship was 1938 when the Horned Frogs beat Carnegie Mellon in the Sugar Bowl.

Most analysts believe the Bulldogs have a walk-off game, but TCU has proven worthy of the challenge.