Lots of great games, but too many bowls 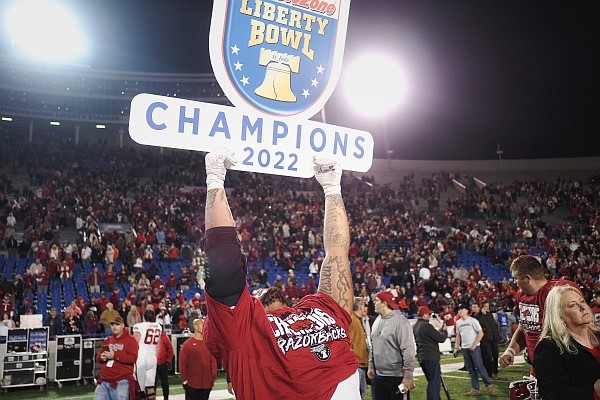 An Arkansas player holds up a sign, Wednesday, December 28, 2022 at the end of triple overtime during the Autozone Liberty Bowl at Simmons Bank Liberty Stadium in Memphis, Tenn. Visit nwaonline.com/photos for the photo gallery.

Bragging rights for which conference has the best football programs are still up in the air.

For the SEC, it definitely hinges on Georgia winning the national championship because so far it hasn’t just meant more to be bowling.

At one point, the SEC was 1-4 with the Arkansas Razorbacks having the only win, but then came the top of the league and a 5-1 finish.

The SEC did earn points for going 3-1 against the Big Ten, with its only win being Iowa over Kentucky.

The SEC was 2-1 against the Big 12 with Ole Miss losing to Texas Tech. The Rebels were 7-0 to start the season and ended it going 1-5. An easy early schedule pumped some sunshine into the Rebels Nation.

The SEC was 1-1 against the ACC with Tennessee beating Clemson in the Orange You Sad You’re Not in the Playoffs and Wake Forest besting Missouri.

The Big Ten looked like it was going to run away from everyone in postseason with a 4-0 start. But it then lost four before Penn State stopped the bleeding with an easy win over Utah.

There were a few boring games, but mostly they were entertaining and probably the biggest upset didn’t happen until Monday, when Tulane shocked Southern Cal 46-45 in the Cotton Bowl.

A case can be made for TCU’s win over Michigan being a bigger upset except that happened in the College Football Playoff.

Tulane, a school famous for academics and being in New Orleans, is not a football factory but what an incredible season the Green Wave had. They had wins over Kansas State and Cincinnati, and their two losses were by a total of 10 points.

Games like that and Arkansas’ in the Liberty Bowl are why college football needs to keep the bowl system and not pour everything into the playoffs.

Obviously the bowls are taking a hit with players opting out to prepare for the NFL Draft, which Alabama’s Nick Saban discussed opening after their game.

He said the players who choose to play are great examples for their teammates and asked what players who opt out are preparing for, running the 40-yard dash at the combine camp?

After Alabama beat Kansas State, quarterback Bryce Young and and linebacker Will Anderson, two certain first-rounders in the draft, said they are leaving for the NFL.

More from WholeHogSports: Briles a target for Mississippi State gig, according to a report

Saban did say it was going to be an ongoing problem if not addressed soon. The NCAA changed its rules earlier this year to allow redshirt freshmen to play in bowl games and not count against eligibility.

What the players don’t realize is that a bowl experience is like playing in the NCAA Tournament, something they most likely will regret not doing some day.

With that said, there are too many bowls.

Many of them are played before sparse crowds even though each schools is required to buy 12,500 tickets, although ESPN does a great job of not showing those empty seats, but it is the reason there are so many bowls.

It needs programming and sales.

It might help some of the bowl folks if they visited the Cotton Bowl or Liberty Bowl to see how they are ran.

The SEC had 11 teams in bowl games and are guaranteed not having a losing record and, it is one win away from keeping its bragging rights.