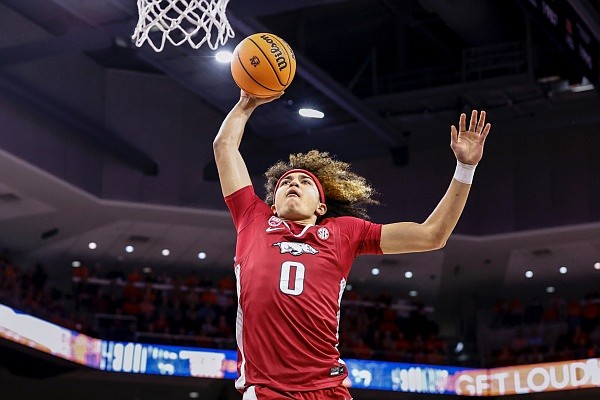 Arkansas guard Anthony Black (0) goes up for a dunk against Auburn during the first half of an NCAA college basketball game Saturday, Jan. 7, 2023, in Auburn, Ala. (AP Photo/Butch Dill)

The 6-7 freshman played 110 of 120 available minutes during the Razorbacks’ 1-2 start against LSU, Missouri and Auburn. Had he not been tagged with a pair of early fouls last Saturday against Auburn, he would have a fairly comfortable lead in that category.

Black, atop the conference in total minutes played with Kentucky point guard Sahvir Wheeler, came off the floor for 14 seconds against Missouri and 9:49 in the first half at Auburn.

“If he wasn’t in foul trouble, I guarantee you he would have played 40 minutes,” Arkansas coach Eric Musselman said Monday. “He’s just played really good basketball. He’s in great shape and is able to do that.”

Given the Razorbacks’ struggles on the offensive end of late, they will need the talented guard to not only remain on the floor, but continue to play with the aggressiveness displayed in the 72-59 loss at Auburn.

More from WholeHogSports: Musselman, Johnson preview the Razorbacks' home game against No. 4 Alabama

Musselman added that Black was “phenomenal” at Auburn.

“We needed some points and he was extremely aggressive both in the half court and in transition,” he said.

Black is second on the team in scoring (12.0) and rebounding (5.7) in SEC games. His knack for getting to the free-throw line has, in a way, helped offset a field goal percentage of 38.5% to this point.

Kamani Johnson, a third-year forward at Arkansas, has been impressed with Black’s poise. He added that he has been in Black’s ear about being the aggressor on offense.

“Our last game on the road, things weren’t really going our way, but he was still performing good,” Johnson said. “I think how aggressive he is is really good for us because he’s a playmaker. He doesn’t like to look at his shot first, but we’re just going to need him to do that for us a little bit more.

“If you talk to him, he’s just going to talk about how we’re 1-2, but I’ve been really impressed with AB so far.”

His value can be summed up in the Razorbacks’ offensive numbers when he has sat on the Arkansas bench.

According to HoopLens analytics, the Razorbacks have scored at a 1.05 point-per-possession rate in Black’s 918 possessions this season. That number falls to 0.96 PPP in 190 possessions without Black.

“(I said don’t) worry about if anybody thinks you’re selfish, because anybody on our team, we’re not really focused on that,” Johnson said. “We’re focused on winning and that’s what we’re going to need him to do for us to win.

“I’ve been really impressed with AB.”

Johnson was right in regards to Black’s team-first mentality. Following the loss to Auburn, the guard was asked if he believes he needs to approach each game moving forward with an attack-first mindset.

Black responded by stating his sole focus is doing what is needed to win games.

“I could tell early on that we were going to need me on offense a little more than I’ve been (needed),” Black said. “Just (being) aggressive. And I’ll probably have to keep playing aggressive going forward.”

Musselman said Black was “the guy” who was unbothered by the road environment. That composure could come in plenty handy Wednesday as Arkansas welcomes in No. 4 Alabama (13-2, 3-0 SEC), which is No. 2 in the conference in defensive efficiency, per KenPom.

“We’ve just got to come in ready to play,” Black said. “It’s going to be a big game, so we’ve got to start the game better than we did (Saturday and) than we have the whole season, really.”

Crimson Tide coach Nate Oats was clear Monday that slowing Black is a key to Alabama winning its fifth consecutive game. Oats added that he recruited Black out of Duncanville, Texas.

“Black can score. A little bit more of a distributor,” Oats said. “Black plays with the ball. … We’re going to have to keep Black out of the lane.”