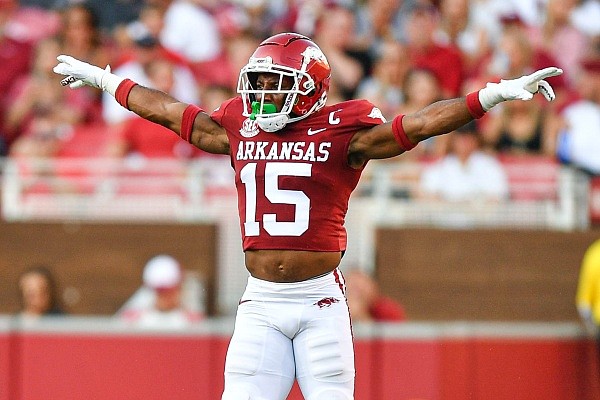 Arkansas defensive back Simeon Blair (15) celebrates a defensive stop, Saturday, Sept. 17, 2022, during the first quarter of the Razorbacks’ 38-27 win over Missouri State at Donald W. Reynolds Razorback Stadium in Fayetteville.

In a post to his Twitter account, Blair stated his commitment to Memphis. Blair entered the NCAA transfer portal on Dec. 30, two days after Arkansas’ 55-53 triple-overtime victory over Kansas in the Liberty Bowl.

A former walk-on, Blair finished third on the team in 2022 with 73 tackles. He also had 2 tackles for loss and 5 pass breakups, including 1 in 3 straight games against Mississippi State, BYU and Auburn.

Blair, who had a career-high 10 stops against Missouri State, totaled 136 tackles and 11 pass breakups in his Arkansas career. The Pine Bluff native was named a team captain after safety Jalen Catalon’s season-ending injury against Cincinnati.

He played a team-high 962 defensive snaps in 13 games this season and finished with the fourth-lowest overall defense grade among Razorbacks, according to Pro Football Focus, at 50.8. Blair also posted the second-worst coverage grade (42.0) on the team.

Razorbacks coach Sam Pittman placed Blair on scholarship prior to the 2020 season.