Catalon commits to Longhorns out of portal 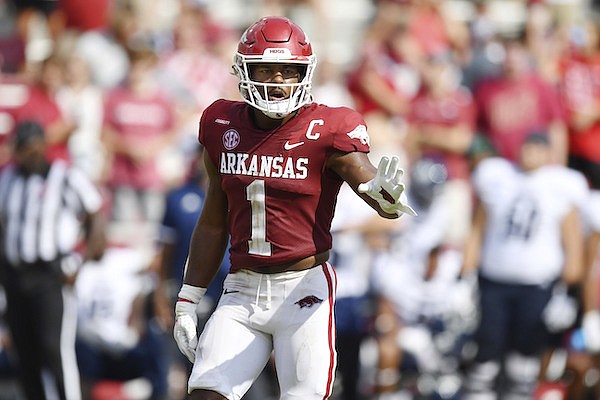 Arkansas defensive back Jalen Catalon (1) against Rice during the second half of an NCAA college football game Saturday, Sept. 4, 2021, in Fayetteville. (AP Photo/Michael Woods)

FAYETTEVILLE — Preseason All-America safety Jalen Catalon announced Monday that he was committed to Texas for the 2023 season.

Catalon, a native of Mansfield, Texas, was one of two former Razorbacks who hail from the state to commit to Texas schools on Monday, as quarterback Malik Hornsby revealed he would be playing at Texas State this fall.

Catalon, who played in 21 games over the course of four seasons, had a breakout season as a Freshman All-American in 2020. That year was sandwiched between a serious run of injuries.

He needed knee surgery in high school and redshirted at Arkansas in 2019 before racking up 99 tackles, 51 solo stops, 3 interceptions and 7 passes defended in 2020.

Catalon had 46 tackles and 6 passes defended through 6 games in 2021 while playing with shoulder pain before needing surgery following a 52-51 loss at Ole Miss midway through the season.

He had 8 tackles, 5 solo, in the season-opening 31-24 win over Cincinnati before re-injuring his shoulder and coming out early in the second half. He then had reconstructive shoulder surgery and was away from the team for a while before rejoining later in the year.

Catalon would have two seasons of eligibility remaining with the Longhorns based on the possibility of using a covid-19 season granted by the NCAA.