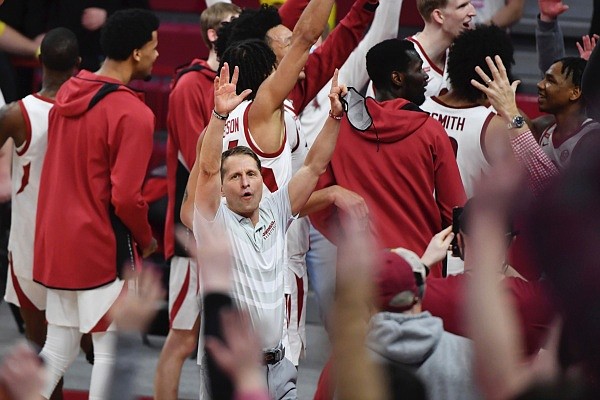 Arkansas coach Eric Musselman calls the hogs with his team after beating Alabama 81-66 during the second half of an NCAA college basketball game in Fayetteville, Ark. Wednesday, Feb. 24, 2021. (AP Photo/Michael Woods)

FAYETTEVILLE — Eric Musselman’s brown hair was soaking wet when he sat down for his postgame Zoom press conference in the Bud Walton Arena interview room on Feb. 24, 2021.

The first question he fielded centered on why. The Razorbacks, Musselman explained, celebrated in their locker room, and players and staff members poured water on him.

Throughout his time with reporters, Arkansas’ then-second-year head coach was upbeat and spoke with great pride about his re-energized team. There was one small concern, however.

“I got a lot of water on me. I don’t know what else. I’ve got to look,” said Musselman, who had changed into a T-shirt. “I like that polo. I hope it didn’t ruin. They probably didn’t order another kids youth XL for me.

“I’m praying that there was no Gatorade on that doggone thing.”

For Arkansas and Musselman, it was a night worth celebrating. The Razorbacks took down the No. 6 Crimson Tide 81-66 to win their eighth consecutive game in Southeastern Conference play.

At the time, the win was Musselman’s most significant in his brief time in Fayetteville and helped Arkansas basketball gain respect in the SEC and on a national level. Looking back nearly two years later, it was an early program-building victory and one that many can point to as a springboard in the Razorbacks’ run to relevancy.

They have been ranked in 47 of 61 games since. On Wednesday, the No. 15 Razorbacks host fourth-ranked Alabama for the first time since 2021.

Asked on Monday for memories of the game or the night’s celebration, Musselman could not recall any. He added that he did not remember the final score or other details.

“I guess I black out after games, winning and losing,” Musselman joked.

Kamani Johnson, a 6-7 forward who redshirted in 2020-21 after transferring from Arkansas-Little Rock, has a clear memory about the game despite not playing.

On Monday, he recalled the intensity of the covid-capped Bud Walton Arena crowd of 4,400. The second-half ejections of Alabama’s John Petty and Arkansas’ Jalen Tate brought a smile to his face, as well.

“It was a big one for us,” Johnson said of the 15-point win. “For intensity purposes, I guess us and Alabama may have a little rivalry going on since I’ve been here at least. It’s just going to be a fun matchup.

“It’s always high energy when we play them. A lot of trash talking and just an aggressive game.”

When Arkansas hosted Alabama that night, the game was the Razorbacks’ second under Musselman as a ranked team. Arkansas jumped into The Associated Press Top 25 for the first time on Feb. 15 that year at No. 24, then defeated Florida 75-64 the following day.

After a road game against Texas A&M was postponed, the No. 20 Razorbacks had ample time to prepare for the Crimson Tide. They executed their plan brilliantly and raced away late with a convincing result that helped thrust them to No. 12 in the AP poll five days later. Ahead of the SEC Tournament, Arkansas was No. 8 in the country.

Alabama coach Nate Oats, who entered the conference the same year as Musselman, remarked Monday that one fact he remembers from his team’s loss at Arkansas two seasons ago is the free-throw discrepancy. The Razorbacks shot 43 free throws to the Crimson Tide’s eight.

Alabama was whistled for 32 fouls to Arkansas’ 18.

More from WholeHogSports: Johnson not shy about hitting the glass for the Razorbacks

“This game here probably means a little bit more right now than it used to in the past, so this will be a fun game to go get,” Oats said. “This has meaning when it comes to the SEC championship, and if you look at...they’re 1-2 now, and I think last year they started 1-3 and then went on a run and finished 13-5, if I remember right. They were competing for an SEC championship all the way up to the end.

“The fact they’ve started 1-2 I don’t think fazes them a whole lot. I think they’re going to be ready to go and still plan on competing for an SEC championship, as we are.”

Wednesday’s game, with Karl Ravech and Jay Bilas on the call for ESPN2, will be the first between AP top-15 teams in Bud Walton Arena since Jan. 29, 1995, when the No. 9 Razorbacks defeated No. 5 Kentucky 94-92 on Super Bowl Sunday.

“There’s a reason they’re ranked fourth in the country, because they’re really, really good and they have a really difficult non-conference schedule,” Musselman said of Alabama. “They did an awesome job winning those games that they scheduled. They’re a really confident team.”

Johnson spoke Monday in a way that suggests the Razorbacks are, too, and that they understand the significance of a win to begin this week. Arkansas has won its last five home games against ranked opponents.

The first win in that stretch: over Alabama in February 2021.

“I mean, it’s two teams that feel they’re at the top of the SEC and competing for the SEC title,” Johnson said. “So whenever we get one of those early matchups it’s just kind of like a chest-pumping match, for sure.”