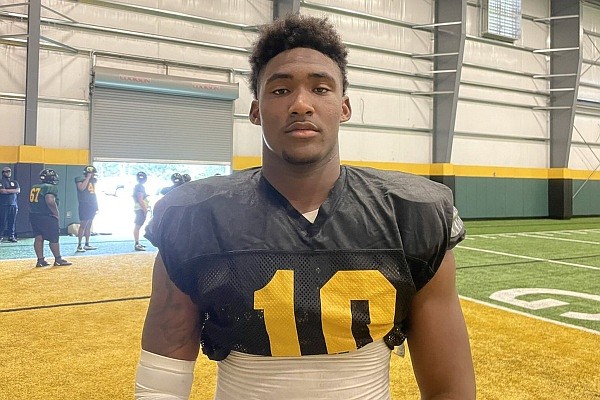 With the vast majority of the 2023 class signed and the recruiting of midterm transfers winding down, college football coaches are focusing more on the 2024 class of prospects.

With the dead period ending Thursday, schools can start hosting juniors and other underclassmen on Friday up to Jan. 30.

The University of Arkansas is expected to host highly recruited Mills defensive lineman Charleston Collins and other prospects for unofficial visits this weekend.

Collins has noticed an uptick in activity of coaches.

“My phone has been buzzing a lot ever since everybody started to switch their focus to the 24s,” Collins said. “Coaches are reaching out trying to get me down to the campus. I have a few different visits scheduled right now.”

Recent conversations with coaches have been geared more toward getting him on campus.

“It’s definitely been different,” Collins said. “A lot of the conversations have changed from ‘Hey man, how are you?’ to ‘Hey man, when you coming down? You can definitely see and feel the difference.”

He plans to make his seventh visit to Fayetteville on Saturday since his recruiting process started. He last visited the Hogs on Dec. 10 with some teammates.

He also plans to visit Texas on Jan. 21.

Collins’ relationship with defensive line coach Deke Adams has been key for his interest in the Hogs.

He had 124 tackles, 46 tackles for loss, 12 sacks, 5 recovered fumbles, 4 pass breakups and 1 forced fumble this season.

On3.com rates Collins a 4-star prospect, the No. 10 defensive lineman and No. 132 overall prospect in the nation in the 2024 class.

“We’ve had a few different conversations,” Collins said of he and Williams. “He’s a real cool guy. He and I decided I’m going to sit down in his office and break down some of my film. Really just talk to each other and really get a feel for each other because with Coach Odom leaving was a big punch in the stomach because that was my guy but it’s all good.

“I’m just focused on building this relationship with Coach T-Will. We’ll go from there.”

His initial reaction after talking to Williams was positive,

“He came off real cool, high energy, all smiles,” said Collins of their FaceTime conversation. “He was the whole package. He had told me he had already broke down my highlights from this past season. So he already knew about my game and how I played.

“We really just got on the phone and got to know to know each other and talked a little football, but my first impression of him was I loved him. I feel like he’s somebody I can grow close to because he has that vibe.”