SEC report: Vols off to hot start in league 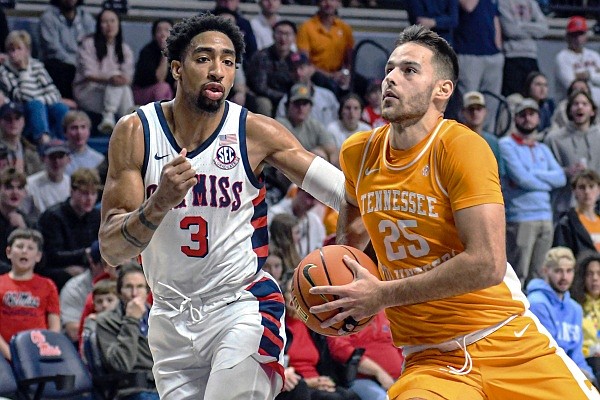 FAYETTEVILLE — Tennessee basketball is off to a roaring league start in Year 8 under head coach Rick Barnes.

The Volunteers annihilated South Carolina 85-42 on the road on Saturday, holding the Gamecocks to 12 field goals to tie their low for an opponent under Barnes. Tennessee forced 18 turnovers and outscored the home team 20-2 in second-chance points.

The Volunteers, 3-0 in league play for the first time in four years, host Vanderbilt tonight and Kentucky on Saturday.

Tennessee, which is No. 2 in the NCAA’s NET rankings behind Houston, has opened the new year in dominant fashion.

Following a 63-59 win at Ole Miss to open conference play on Dec. 28, the Volunteers have crushed Mississippi State (87-53) and South Carolina by a combined 77 points. The Vols had not won back-to-back games over SEC opponents by 30-plus points since 1965, when they whipped Georgia 83-49 on Jan. 30 and smacked Florida 75-43 two days later.

South Carolina standout GG Jackson, a projected NBA lottery pick, did not score on 0-of-8 shooting. The freshman had been the SEC’s fourth-leading scorer and was the only freshman in Division I to hit double figures in all of his team’s games.

“Once it got down to where it was, we were not made out of the things to make any sort of real fight or comeback,” Paris said Saturday. “Guys wanted the clock to tick as fast as humanly possible.”

In each of its first three SEC games, Tennessee has held its opponents’ leading scorer to single digits.

Texas A&M notched its first four-game winning streak of the season and also shucked off a pair of long-standing skids last week with wins over Florida and LSU.

The Aggies won at Florida for the first time with a 66-63 victory last Tuesday, breaking the ice on an 0 for 5 series history in Gainesville, Fla.

“I think that our preparation for each team has benefited us tremendously in the way that we can allow the team to understand what they run and what we are going to do to stop that, etc,” Williams said. “We have played hard and together and, to some degree, with great IQ.”

The Alabama student section, many of them wearing giveaway hard hats, serenaded Kentucky with loud chants of “NIT! NIT!” late in the game as the Crimson Tide polished off a 78-52 rout of the Wildcats.

Many of the students took the opportunity to put Sharpie messages on the promotional hard hats, including one that read “Cal is washed” in reference to 63-year-old Kentucky Coach John Calipari, who signed a “lifetime” contract with the school in 2019.

Alabama Coach Nate Oats responded to a question about the chanting kids.

“Kentucky’s not going to the NIT,” he said. “They’re an NCAA Tournament team. It’s just college students being college students. They’ve got plenty of talent over there. … They’ll get their stuff figured out.”

Kentucky suffered its worst loss ever against Alabama and its third-most lopsided defeat during Calipari’s 14 years.

“This one, I don’t know if I want to watch the tape,” Calipari said. “I’m disappointed that we did not play better because I thought we were ready to play a good game on the road.”

Oats referenced a line made famous by Alabama Coach Nick Saban, who attended the game with his wife, Terry.

Tennessee’s Olivier Nkamhoua notched a significant milestone in his return from ankle surgery, tying a school record while posting his third career double-double with 21 points and 10 rebounds in an 85-42 rout of South Carolina on Saturday.

Almost 11 months to the day after suffering a season-ending injury at South Carolina’s Colonial Life Arena on Feb. 5, 2022, Nkamhoua shot 10 for 10, tying the Vols’ record for most field goals in a game without a miss. The 6-9 senior from Helsinki, Finland, went 5 for 5 in his previous game, so his streak of consecutive made field goals is 15 heading into tonight’s game against Vanderbilt.

Nkamhoua was averaging 8.6 points and 5.6 rebounds while starting all 22 games prior to his injury last season.

Florida rallied from a 13-point deficit to beat Georgia 82-75 on Saturday at Exactech Arena in the return of Mike White, who left the Gators to take the Bulldogs’ reins.

Florida bounced back from a three-game losing streak to post its first conference win for Coach Todd Golden.

“There are only so many blows you can take before you start having issues with your trust and belief,” Golden said.

Texas A&M forward Julius Marble and Alabama forward were named SEC players of the week by the league office on Monday.

Marble, a 6-9 junior from Dallas and Michigan State transfer, averaged 17 points and 7.5 rebounds in Aggie wins at Florida and against LSU last week to be named SEC Player of the Week.

Miller earned SEC Freshman of the Week honors after averaging 18 points and six rebounds in wins over Ole Miss and Kentucky.

Arkansas guards Ricky Council and Anthony Black are the league leaders in minutes played per game.

The only other SEC player averaging better than 33 minutes per game is LSU’s Adam Miller (33.14), though South Carolina’s GG Jackson is right on the brink at 32.99.

Alabama, Tennessee and Texas A&M, the only unbeaten teams in conference play, are the only three SEC teams to have notched a road win through three playing dates.

Tennessee leads the league with two road wins already, surviving a 63-59 game at Ole Miss on Dec. 28 before scouring South Carolina 85-42 on Saturday. Alabama and the Aggies have one road win each.

They join seven other SEC teams — Arkansas, Auburn, Georgia, Kentucky, LSU, Missouri and Vanderbilt — who have not lost a league home game.

Kentucky’s Oscar Tshiebwe is well on his way to leading the nation in rebounding for a second consecutive year, but he’s coming off a clunker in a 78-52 loss at Alabama.

The 6-9, 260-pounder, who passed up the opportunity to declare early for the NBA Draft last spring, was held scoreless in the first half and finished with 4 points on 1-of-7 shooting and 6 rebounds in 23 minutes.

Kentucky starters Tshiebwe, Jacob Toppin (1 of 10) and Cason Wallace (1 of 13) combined to shoot 3 of 30 (10%). Tshiebwe had a game-low minus-25 plus-minus rating (Kentucky was outscored by 25 points when he was on the floor), while Wallace and fellow guard Sahvir Wheeler had minus-23 ratings.

The first of two in the Egg Bowl series was played on Saturday, with Mississippi State outlasting Ole Miss 64-54 at Humphrey Coliseum in Starkville, Miss.

The Gamecocks have only played twice in conference, but the results haven’t been pretty: an 84-79 loss at Vanderbilt in overtime followed by a 43-point home loss to Tennessee on Saturday.

South Carolina’s schedule this week presents a road date at Kentucky tonight at 6 followed by a home game on Saturday against Texas A&M, one of the league’s three remaining unbeaten teams in conference play.

Ole Miss fell at home against Tennessee 63-59 in its conference opener on Dec. 4, then lost road games at Alabama (84-62) and Mississippi State (64-54). The Rebels host Auburn tonight at 8 and host Georgia on Saturday at noon.

If neither team can break though this week, there is hope on the horizon. South Carolina hosts the Rebels on Jan. 17.

The SEC does not have a player at 88% free throw shooting or better and only one qualifier who is better than 83.1% at this point.

From a team standpoint, Missouri leads the league with 75.8% free throw shooting, while Mississippi State is last at 62%.

In conference games, Florida leads the way at 82.8% shooting, while Mississippi State is at the bottom with 48.1% free throw shooting, well below 13th place Arkansas (61.5%).