After loss, Musselman says Hogs have big uphill battle ahead 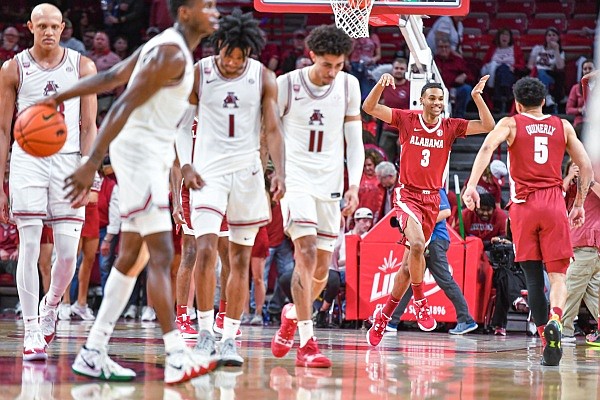 FAYETTEVILLE — For the third season in a row, Arkansas has scuffled out of the gate in Southeastern Conference play.

Two seasons ago, the Razorbacks began 2-4 after an injury to forward Justin Smith. In 2021-22, they opened 0-3 against teams that ultimately finished .500 or worse in conference play.

Arkansas’ 84-69 home loss to No. 4 Alabama on Wednesday dropped the 15th-ranked Razorbacks to 1-3 in SEC play.

Eric Musselman, in his fourth season leading Arkansas, engineered turnarounds the previous two years and molded his rosters into contenders.

Playing without key contributors in freshman Nick Smith and forward Trevon Brazile due to injuries, Arkansas is in a familiar position in 2023. But Musselman said Wednesday that the road to potentially great success this time around will be tougher.

Musselman often states that each game takes on its own identity. The gist of his message was that seasons take on their own identities, too.

“We can talk about the last two years (but) we are in a completely and utterly different state and in a way more uphill battle than we’ve been since I’ve been here, to be quite honest.”

The Razorbacks’ struggles begin on the offensive end. They are averaging 64.8 points per game against SEC competition and shooting 40.3% as a team.

According to KenPom data, Arkansas ranks 12th in league-only offensive efficiency (93.3 points per 100 possessions), last in three-point percentage and 13th in free-throw percentage. To make matters worse, it is also tied for 11th in turnover rate, giving the ball up on 20.2% of possessions.

The Razorbacks shot 42.6% from the floor against the Crimson Tide and made just 2 three-pointers on 10 attempts. It was the second consecutive game in which they made two triples, and third of the season.

“We’ve got to take better care of the ball, too,” Musselman said. “I mean, we didn’t shoot the ball well and we had 15 turnovers and gave up 9 threes. You add those factors in and you’re not going to win many basketball games.

“It’s hard to win right now when you’re not making threes, which I don’t know if we will. And then our free-throw percentage has got to improve, as well.”

As a whole, Arkansas had another tough night offensively, but a pair of runs in each half gave it life. The Razorbacks, after falling behind 28-22 in the first half, used a 9-0 spurt over 1:58 to grab a 31-28 lead.

The Razorbacks committed a pair of turnovers in the next 25 seconds and wound up missing five consecutive field goal attempts.

“I want to be perfectly clear: there is no excuse,” Musselman said. “Like, again, I’ve been around the game way too long and injuries are a part of the game. But we’re missing two guys that we had projected to play right around 60 minutes (combined) for us.

“We’ve got to keep searching and trying to figure it out.”

Strong defensive stretches also allowed the Razorbacks to have a shot to knock off a top-five team. They held projected lottery pick Brandon Miller scoreless in the first half, and over a stretch of 5:59 in the second half, Alabama missed 7 of 8 shots.

But the Crimson Tide’s perimeter shooting killed Arkansas’ spirits in the end. They made 7 of 10 second-half three-point attempts, and key scores — 3 threes in 49 seconds to grow their lead to 74-63 — were a mix of timely shot making and errors on the Razorbacks’ part.

“We didn’t execute the game plan like we were supposed to in the second half,” Musselman said. “We never went under one (dribble) handoff in the first half — not one. We went over every single one of them.

“I mean, I know we went under at least two dribble handoffs, and our bigs didn’t do a good enough job tracking with their high hands.”

The collection of issues led to a disappointing loss. The Razorbacks (12-4) are now staring at back-to-back road games against Vanderbilt and Missouri.

“There’s just a few things that we’ve got to fix and then I feel like we’re going to be right there,” said forward Makhel Mitchell, who made his first start at Arkansas against Alabama. “I feel like our confidence level is still high.

“We’ve just got to do everything for Coach the way he wants and stuff like that, and we should be fine.”