No doubt Georgia the best 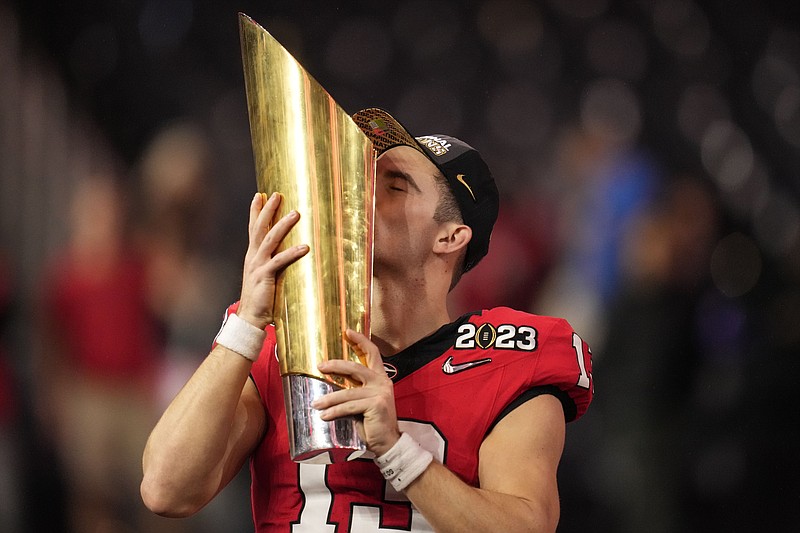 It was frustrating to fall asleep on the sofa for an hour AFTER the national championship game.

So every detail, every play or non play, was seen from start to finish.

The remote was inches from a hand that refused to move, so we sat and watched Georgia dominate TCU like the Bulldogs were the Dallas Cowboys and the Horned Frogs were Little Rock Central High School.

TCU paid dearly for what little success it had. The Frogs had nine first downs, the Dawgs had nine touchdowns, plus a field goal as they scored on 10 of 11 possessions.

It was close to a perfect game, although Georgia did punt once and missed an extra point to set the final score at 65-7.

The game was close twice: Before it started and with 4:55 to play in the first half when TCU scored its lone touchdown to make it 10-7. But in two minutes and two seconds it was 17-7, and the Bulldogs were not looking back.

A former walk-on quarterback, Stetson Bennett, was named the offensive Most Valuable Player, although an argument could have been made for his offensive line that allowed him to run for two touchdowns and throw for four more.

Bennett, who claims to be 5-11, is 25 years old, which is older than five NFL quarterbacks.

The biggest discussion about college football in the months to come won’t be about the transfer portal or Name, Image and Likeness money, but has Georgia’s Kirby Smart dethroned Alabama’s Nick Saban?

For sure, Monday night TCU had no answers for the Dawgs.

Georgia had the ball 36:59 to 23:01 and they scored all six times they got in the red zone, while the Frogs made it there one time and had just 36 yards rushing and 152 passing.

Georgia had 164 yards in the first quarter and finished with 589 yards.

That’s total domination on both sides of the ball.

It was as if Georgia tight end Brock Bowers had a Harry Potter cloak of invisibility.

He had seven catches for 152 yards, and he is just a sophomore.

What made the whole game such a head-scratcher was both playoff games were highly contested. Georgia scored two fourth-quarter touchdowns to beat Ohio State, and TCU went all out to hold off Michigan 51-46.

Instead of getting a great finale, the curtain came down early and stayed down. No wonder oddsmakers made the Bulldogs almost two-touchdown favorites.

It was a great ride for TCU, but the Horned Frogs crashed on national TV.

No one knew it, but the game was over after the first quarter.

The SEC continues in its role as the best football conference in the country. The Big Ten remains a close No. 2, and for the Big 12, this was a big season, but the light at the end of the tunnel may be a train when Oklahoma and Texas leave for the SEC.

His team lacked the experience and confidence and seemed ill at ease on the biggest stage in college football.

The College Football Playoff selection committee did not make a mistake. On paper they had the two best teams, but on the field Georgia was too good.