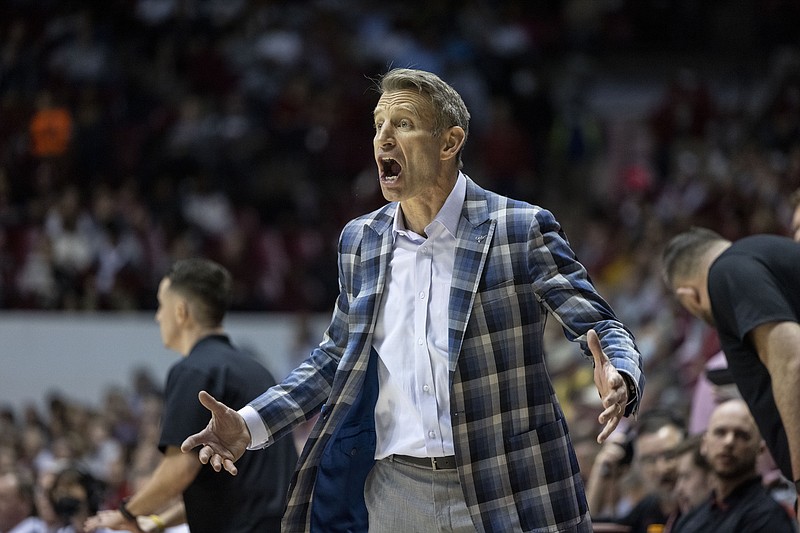 Alabama head coach Nate Oats argues with the referees during the second half of an NCAA college basketball game against Arkansas, Saturday, Feb. 12, 2022, in Tuscaloosa, Ala. (AP Photo/Vasha Hunt)

Musselman has a 3-2 edge, including 2-2 in Arkansas-Alabama games and 1-0 when he coached at Nevada and Oats at Buffalo.

The Wolf Pack went on to the first of three consecutive NCAA Tournament appearances that helped Musselman land the Arkansas job after the 2018-19 season.

Buffalo made three NCAA Tournament appearances in Oats’ four seasons, and he was hired at Alabama after the 2018-19 season.

Musselman and Oats have led the Razorbacks and Crimson Tide to the NCAA Tournament each of the previous two seasons, with back-to-back Elite Eight appearances for Arkansas and SEC regular-season and tournament championships for Alabama in 2021 when the Tide also advanced to the Sweet 16.

“[Musselman] has been to the Elite Eight twice,” Oats said. “He’s done a great job. We won the SEC in year two here, so we’ve both done a pretty good job getting the programs turned around.

“We’re both top 20. He’s done a great job getting talent in there and coaching them. I think we’ve done a decent job here. This game here probably means a little bit more right now than it used to in the past.”

“Our whole team was in the gym this morning,” Johnson said before Monday afternoon’s practice. “We’re holding ourselves accountable.

“I think after that loss on the road, things kind of really settled in that, like, ‘You’re not going to be able to win in the SEC a lot if you’re not working on your game.’

Arkansas will wear old-school uniforms tonight that feature a Razorback jumping through an A.

“It’s a retro look,” Arkansas Coach Eric Musselman said on his radio show. “If people want to know what we do in the summer, we sit around and dream up ideas for new uniforms and try to look at some throwback stuff.

“We still have another one that we’ll wear later on in the season, which I think will get everybody excited.”

Black on the attack

Freshman guard Anthony Black led Arkansas at Auburn with 23 points and made 13 of 16 free throws.

It was the highest-scoring game for Black since he had 26 points in back-to-back games against Louisville and Creighton in the Maui Invitational.

“My job is just to win and see what my team needs game by game,” Black said. “I could tell early on that we were going to need me on offense a little more than I’ve been.

“And I’ll probably have to keep playing aggressive going forward.”

Black, who played 40 minutes in the first two SEC games against LSU and Missouri, was limited to 30 at Auburn because he had two fouls in the first half.

“If he wasn’t in foul trouble I guarantee you he would have played 40 minutes,” Arkansas Coach Eric Musselman said. “He’s just played really good basketball. He’s in great shape and is able to do that.

“I thought he was phenomenal offensively [at Auburn], much like he was for us in Maui, where we needed some points and he was extremely aggressive both in the half-court and in transition.”

Arkansas is playing as a ranked team against a ranked opponent for the third consecutive game with its matchup against No. 4 Alabama.

Missouri remained at No. 20 this week and Auburn moved up one spot to No. 21.

The last time Arkansas had three consecutive games with both teams being ranked was in the 1995 NCAA Tournament when the No. 6 Razorbacks beat No. 13 Virginia 68-61 in the Midwest Regional final in Kansas City, Mo., and at the Final Four in Seattle beat No. 4 North Carolina 75-68 and lost to No. 1 UCLA 89-78.

Prior to tonight, Arkansas last played in three consecutive regular-season games with both teams ranked during the 1990-91 season when the No. 2 Razorbacks beat No. 15 Oklahoma 110-88 in Barnhill Arena, then traveled to New York and beat No. 6 Duke 98-88 and lost to No. 3 Arizona 89-77 in Madison Square Garden.

All three games were part of the preseason NIT.

Arkansas Coach Eric Musselman said on his radio show that doing better with screens is a key to helping the offense improve with the Razorbacks shooting 39.4% from the field (69 of 175) and 19.4% on three-pointers (12 of 62) in SEC play through three games.

“In the past we’ve been able to improve in certain areas like that. We identify a weakness, and then it’s our job to try to help coach guys up.”