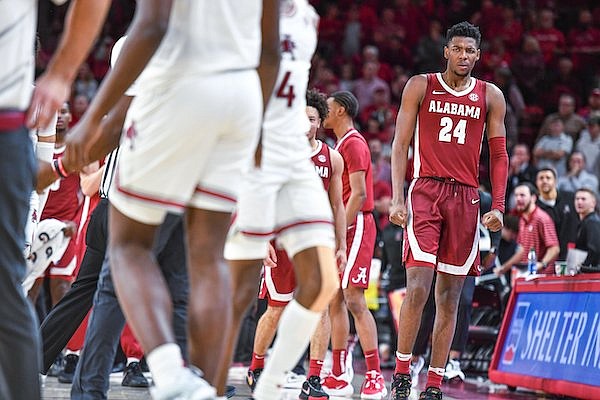 Alabama forward Brandon Miller (24) reacts after making a three-pointer, Wednesday, Jan. 11, 2023, during the second half of the Crimson Tide’s 84-69 win over the Arkansas Razorbacks at Bud Walton Arena in Fayetteville.

FAYETTEVILLE — The University of Arkansas basketball team had cut Alabama’s lead from 12 points to two and the Walton Arena crowd was in full roar.

Then the Crimson Tide’s freshman big-man duo of Noah Clowney and Brandon Miller came alive from the outside and carried No. 4 Alabama to an 84-69 victory over the No. 15 Razorbacks.

“Clowney’s not scared of much,” Tide Coach Nate Oats said. “Neither is Brandon.”

After Jalen Graham scored on a jump hook in the lane to pull the Razorbacks within 65-63 with 4:54 left after they had trailed 62-50, Clowney and Miller combined to score nine points in 49 seconds to push Alabama’s lead to 74-63 with 3:43 left.

Clowney’s and Miller’s three-pointers took the air out of the crowd and the Razorbacks.

There was no coming back from those daggers.

“We just wanted to keep the ball in front of us, but once they started popping and stuff, that changed the game a lot,” said Arkansas senior center Makhel Mitchell, who made his first start and had 5 points, 4 rebounds and 2 blocked shots. “Down the stretch, we needed those stops. But it didn’t happen.”

Vanderbilt had been the last team to beat Arkansas in Walton Arena, 75-74, last season.

The 15-point final margin for Alabama was the most-lopsided of Arkansas’ losses in Walton Arena under Musselman. The previous most-lopsided defeat had been by 13 points in an 82-69 loss to No. 12 Missouri in 2021.

Alabama also became the first SEC team to beat Arkansas at home in a matchup of ranked teams. The Razorbacks had been 11-0 as a ranked team at home against a ranked SEC opponent, including 8-0 in Walton Arena and 3-0 in Barnhill Arena.

“I thought Brandon Miller was phenomenal in the second half,” said Musselman, who called Miller an NBA Draft lottery pick. “That’s what you need great players to do that are on your roster. He stepped up when the game was in the balance.”

Miller, who came into the game averaging an SEC-leading 19.3 points, scored all 14 of his points against Arkansas in the second half after not attempting a shot from the field or a free throw in the first half despite playing 18 minutes.

Davonte Davis, the Razorbacks’ 6-4 junior, was effective covering Miller in the first half.

“Yeah, the first half was incredible,” Musselman said of the defensive game plan on Miller led by Davis. “Absolutely as good as you could play a guy.

“And then in the second half, not so good.”

“I thought Miller came out with a different mindset,” Musselman said. “Maybe he didn’t know we were going to guard him with a smaller player.

“But he was able to adjust his game or his mindset … I don’t know, but he came out and was a different basketball player for sure, and we didn’t execute the game plan like we were supposed to in the second half.

“We never went under one [dribble handoff] in the first half, not one. We went over every single one of them [in the second half].”

Graham, a senior forward, matched his season-high with 16 points off the bench.

Council, a junior guard, had 15 points and also played off the bench for the first time this season, though he started the second half. He had five turnovers.

Black, a freshman guard who led Arkansas with 23 points in last Saturday’s 72-59 loss at Auburn, struggled offensively against Alabama. He shot 2 of 12 from the field, 1 of 5 on free throws and had 4 turnovers.

“I mean, we take 10 three balls attempted to their 20, so they took twice as many threes as us and we only got to the line 23 times,” Musselman said. “I don’t understand that.

“If we were taking a lot of three-point shots I would understand it. But we’ve got to take better care of the ball, too.”

The Razorbacks had 15 turnovers to Alabama’s 13, but the Tide finished with a 24-7 advantage in points off of turnovers.

“Tough road win,” Oats said. “Our guys showed that they’ve got some toughness, some character, some grit. They can handle some runs and still stay in there.”

Alabama now has five victories over ranked teams away from home, including a 71-65 win at No. 1 Houston.

“After we beat Houston at Houston, I think our guys had some confidence they could win anywhere,” Oats said. “We’ve got a talented group.

“They did a really good job on Brandon Miller for most of the game, then he shook loose right at the right time. I think he’s grown up.

“In the past, when he couldn’t get a shot, he’d get a little frustrated. But when they’re going to play him like that, that opens the floor up for everybody else.

“If they’re just going to lock onto him, there’s more space on the floor for everybody else, and we were able to take advantage of that.”

Alabama finished the game on a 19-6 run.

“Alabama deserved to win. They went through that [late three-point] stretch that was way too much for us to overcome based on our lack of shooting and our lack of stretching the floor out.”