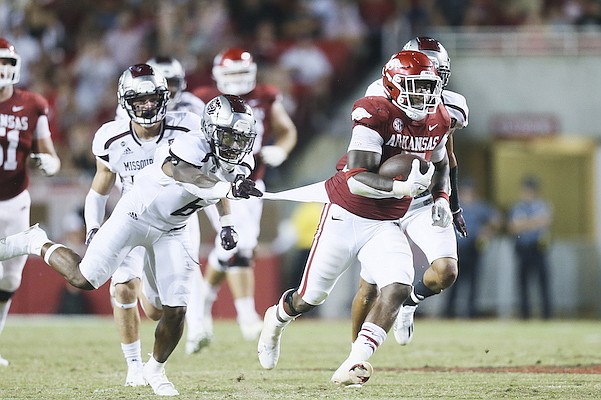 FAYETTEVILLE — The Arkansas Razorbacks capped a slightly disappointing 7-6 football season in 2022 with a dramatic 55-53 triple overtime victory over Kansas in the Liberty Bowl, the Hogs’ third consecutive postseason win in Memphis.

The University of Arkansas drew some preseason consideration as a dark horse candidate to compete for a title in the SEC West and even reached No. 10 in the Associated Press poll after its 3-0 start.

However, the Razorbacks struggled in the low red zone in several key games, which led to a poor record in one-score games. And while they posted a school-record 42 sacks, they were shredded through the air when they weren’t putting the quarterback on the ground, allowing an FBS-worst 294.7 passing yards per game, the highest figure in school history.

Arkansas opened and closed the season with one-score nonconference wins over No. 23 Cincinnati (31-24) and Kansas. However, the area between those book-end wins was more rugged, as the Hogs lost four games decided by 3 points or less. Even more painful, three of them came against trophy rivals and all of them featured a frustrating series or play inside the opponents’ 3.

Therein lies the difference between the 9-4 success of 2021 and the not-so-thrilling 7-6 sequel for third-year Coach Sam Pittman.

The difficulty in Arkansas’ schedule was apparent and almost certainly played a role in the two-win dropoff for the Razorbacks. The nonconference slate featured teams who were all ranked at some point in the season. The conference schedule had the usual heavyweights, plus the South Carolina Gamecocks, who were unranked when the Hogs thumped them 44-30, but who knocked off top 10 Tennessee and Clemson late in the season and finished ranked.

The curious nature of Arkansas’ season was apparent in the final rankings of every FBS team published by The Athletic on Tuesday. The Razorbacks were slotted at No. 55 in the rankings, but had wins over four teams ranked higher in No. 24 South Carolina, No. 37 Ole Miss, No. 42 Cincinnati and No. 50 BYU, but lost to three teams ranked lower in No. 63 Missouri, No. 69 Texas A&M and No. 73 Liberty.

A handful of plays always loom as the ones that changed the momentum of a game or played a key role in the outcome. The 23-21 loss to Texas A&M had three such plays, which we have condensed into one in this presentation of the 10 plays that shaped the Razorbacks’ season.

Quarterbacl KJ Jefferson’s poorly-timed and ill-fated jump toward the end zone from the 3 against Texas A&M was the play of the game and maybe the season in the Hogs’ first loss and first trophy game giveaway.

The Razorbacks seemed firmly in control with a 14-7 lead, and they had just driven 72 yards in 11 plays after Jadon Haselwood’s 12-yard reception set up first and goal from the Texas A&M 3 late in the second quarter.

Arkansas tailback Raheim Sanders caught up to Chappell and had him stopped at the Aggies’ 18, but he didn’t drive him out of bounds or into the turf. With his hands free, Chappell pitched backward to Demani Richardson, who had clear sailing for 82 yards to score a game-changing touchdown.

The Razorbacks had a shot to win the game late after driving to the Texas A&M 16. But they lost 9 yards on a Ricky Stromberg snap off his backside, then Cam Little’s 40-yard field goal try clanged off the top of the right upright.

In a season with a handful of frustrating losses, this felt like the most painful.

Trailing 29-24 at Missouri early in the fourth quarter, the Razorbacks were on the move following back-to-back runs of 17 and 13 yards by Raheim Sanders and KJ Jefferson, respectively, to reach the Tigers’ 5. A pass interference call on Missouri set Arkansas up with first and goal from the 2.

That’s as far as the Hogs would get. Jefferson went nowhere on a keeper, then he threw incomplete for Ketron Jackson in the end zone. On third down, tight end Trey Knox motioned in under center and tried a sneak. But the Tigers stopped him in his tracks.

Instead of risking yet another fourth down frustration just a few feet shy of a touchdown, Sam Pittman called on Cam Little for a chip shot 20-yard field goal to make it 29-27.

That would be the final score as the Razorbacks ceded their third and final trophy game of the season and lost yet another chance to notch their first win at Columbia, Mo.

Ahead of LSU 3-0 on a cold day at Reynolds Razorback Stadium, Arkansas looked poised to make it 10-0 in the first quarter following Latavious Brini’s fumble recovery at the Tigers’ 10 after Jordan Domineck poked the ball away from Jayden Daniels.

AJ Green blasted ahead for 8 yards on the first snap, then gained another yard on second down, when backup quarterback Malik Hornsby might have been able to keep for a walk-in score. Instead, it set up third and goal from the 1. The final yard, which had been a problem area in multiple Arkansas games, proved frustrating again. Hornsby was stopped for a 2-yard loss on third down and his keeper went nowhere on fourth down. The No. 7 Tigers went on to post a 13-10 win en route to the SEC West crown.

The play was a simple wheel route for tailback Rashod Dubinion, with some traffic on the interior to help free him, but it proved to be a game-winner in the Liberty Bowl.

KJ Jefferson feathered the short pass in perfectly for an easy catch on the Razorbacks’ mandatory 2-point conversion to open the third overtime. When Kansas backup quarterback Jason Bean’s reverse pass sailed high, the Hogs had held on for a thrilling 55-53 win.

Offensive coordinator Kendal Briles had a big bowl game, inserting a fake-two-ways touchdown pass for freshman tight end Ty Washington and operating some nifty two-back sets that racked up 681 yards. Briles’ play calling was at peak efficiency in overtime, when the Razorbacks scored two touchdowns and converted a pair of 2-point plays on six total snaps that covered 56 yards.

The Razorbacks seemed out of kilter most of the game against No. 23 Liberty, but they had a chance to salvage the game with a late rally, needing only a 2-point conversion to tie the Flames with 1:11 remaining.

Arkansas began its rally from a 21-0 deficit on Cam Little’s 50-yard field goal on the final play of the first half and Quincey McAdoo’s blocked punt for a safety late in the third quarter. KJ Jefferson threw touchdown passes of 5 and 8 yards to Trey Knox in the final minutes, and Raheim Sanders had ran for a 2-point conversion after the first of those scores as Arkansas pulled within 21-19.

Jefferson, playing with an injured right shoulder, had gotten off to a shaky start, but he finally found his groove in the late going. He took a Shotgun snap over the left side on the decisive 2-point conversion. However, linebacker Ahmad Walker shot a gap and slowed Jefferson’s momentum as end Stephen Sings wrapped him up low. Jefferson extended the ball toward the goal plane as his knee was contacting the grass, but the officials ruled live and confirmed on replay that the nose of the ball was just short of the end zone when his knee touched.

Had tailback Raheim Sanders been wearing an old tearaway jersey, his work would have been easier in a key moment vs. Missouri State. As it was, Sanders kept chugging with a Bears defender grabbing the back of his jersey while going to ground and the tailback eventually broke free.

Sanders took a shovel pass from KJ Jefferson 73 yards for a breakaway touchdown on a two-play scoring drive to bring the Razorbacks within 27-24 against the Bears and former UA Coach Bobby Petrino with 11:38 left in the game.

Three or four BYU defenders had a shot at sacking KJ Jefferson on a third-and-11 play from the Arkansas 42 with the Razorbacks leading 24-21 late in the second quarter. The Cougars had been driving moments earlier when Hudson Clark picked off Jaren Hall at the Hogs’ 32, and Jefferson made the takeaway pay.

Jefferson protected the ball while being grabbed and jumped on by the Cougar defenders, but he eventually broke free, rolled to his right and spotted Trey Knox, following his scramble rules on the sideline. Knox made the catch and juked one defender before picking up 32 yards to the Cougars’ 22.

Rashod Dubinion caught a wheel route from Jefferson for a 15-yard touchdown with 40 seconds left in the half, and the Razorbacks were on their way toward a 52-35 victory.

How did the SEC officiating crew miss it? On a critical third-and-15 snap from the Alabama 20 early in the fourth quarter, Crimson Tide backup quarterback Jalen Milroe started a scramble from the pocket, broke free through the left side and was not caught until 77 yards later, when Khari Johnson hauled him down at the Arkansas 3.

One reason why the right side of the Arkansas defensive front was clear: Left tackle Tyler Steen had perpetrated a daily double infraction of hands to the face and holding on Arkansas end Jordan Domineck. Had either of the fouls been flagged, Alabama would have faced a third and 25 from its 10 with the Reynolds Razorback Stadium crowd in full voice.

At the time, Alabama was clinging to a 28-23 lead after the Hogs had scored 23 consecutive points. A stop there would have swung momentum clearly to the Arkansas sideline.

Instead, Jase McClellan rambled over from the 3 moments later to push Alabama’s advantage to 35-23, and the Tide went on to post a 49-26 win.

South Carolina had cut Arkansas’ lead to 35-24 with 6:25 left when Coach Shane Beamer called for an onside kick. Bumper Pool, lined up on the right on the Arkansas “hands” team, was ready. The fifth-year linebacker fielded Mitch Jeter’s bouncing onside kick and motored toward the north end zone at Reynolds Razorback Stadium before being caught at the Gamecocks’ 9 following a 34-yard return.

In hindsight, the Hogs’ relatively easy win over their former cross-division rivals wound up being a big victory over a team that closed strongly.

Transfer newcomers Dwight McGlothern and Jordan Domineck made impact plays in the Razorbacks’ 31-24 win over No. 23 Cincinnati in the opener.

McGlothern picked off a Ben Bryant throw on Cincinnati’s first possession, after the Bearcats had driven 59 yards to the Arkansas 26. On a first-down snap, McGlothern drove hard and undercut Tyler Scott’s out route, making the interception at the Arkansas 20 and bringing it back 51 yards to the Bearcats’ 29. Three plays later, KJ Jefferson broke a 15-yard run over the left side for Arkansas’ first touchdown of the season to capitalize on the takeaway.

Domineck’s takeaway on his first sack as a Razorback loomed just as large. With Arkansas leading 24-17 and Cincinnati riding momentum after Tre Tucker’s 30-yard punt return to the Hogs’ 37, Domineck got to work. He used a swim move to get past left tackle James Tunstall, and he stripped Bryant and recovered the fumble at the Bearcats’ 49. Trey Knox caught a 32-yard touchdown pass from Jefferson two plays later to put Arkansas ahead 31-17 with 9:26 remaining.