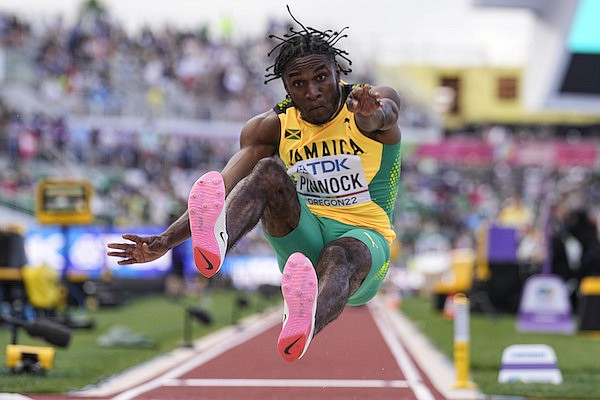 FAYETTEVILLE — Several men’s track and field athletes who previously competed in the SEC against the University of Arkansas are now Razorbacks.

Arkansas loaded up in the transfer portal and added athletes from Tennessee and Kentucky — as well as Arizona State, Clemson and Oklahoma — to its traditional SEC powerhouse program.

“Most of them are seasoned vets,” Arkansas men’s Coach Chris Bucknam said. “I don’t expect any kind of learning curve that they have to go through before they compete. They’re ready to go.”

Some of the newcomers who will make their Razorback debuts in today’s Arkansas Invitational at the Randal Tyson Center are All-American throwers Jordan West (from Tennessee) and Roje Stona (Clemson) in the shot put, sprinters Chris Bailey (Tennessee) and Lance Lang (Kentucky) and multi-event athlete Yariel Soto Torrado (Tennessee), who will compete in the pole vault.

“We’ve added a lot of firepower,” Bucknam said. “I have to hand it to my assistant coaches [Doug Case and Travis Geopfert]. They did a phenomenal job working at recruiting.”

“The portal has worked out really well for us,” Bucknam said. “We have a great university, great location, and our facilities are off the charts. It’s a good vibe.

“We’ve won seven of the past eight SEC championships in track and cross country. … Winning those championships has made a difference for us in the portal.”

Arkansas senior Ayden Owens-Delerme, last year’s NCAA champion in the heptathlon and decathlon, will compete in the pole vault and shot put today.

“We go from all training for months right into a meet. It may sound easy, but it’s not,” Bucknam said. “So it’s a question of being really patient with these guys.

“This is the start of the season, it’s an important meet, but we’re going to take our time and make sure everyone stays healthy.”

For Arkansas’ women’s team, today marks the return of All-American sprinter Tiana Wilson, a junior from Hamburg who missed last season after tearing an Achilles tendon at the 2021 NCAA Outdoor Championships. She’ll run the 60 meters to start working her way back to her specialities in the 200 and 400.

“Tiana has been looking better and better in every workout she completes,” Arkansas women’s Coach Lance Harter said. “We know down the road she’s going to be a great asset again to the program.”

The UA women also added some impact transfers, including junior All-American sprinters Amber Anning (from LSU) and Ackera Nugent (Baylor). Nugent was the NCAA champion in the 60-meter hurdles in 2021.

Nugent will run the 60 hurdles today and Anning will run in the 200.

“The portal’s been very friendly to us,” Harter said. “We’ve built a lot of depth and found some exceptional talent to join us.”

Junior Britton Wilson, the NCAA champion in the 400 hurdles last year for the Razorbacks after transferring from Tennessee, will run the 600 and also on the 1,600 relay today.

“If we can keep the nerves under control in this first competition, I think we can gain some momentum,” Harter said. “It’ll be exciting to see how our newcomers handle wearing the Razorback jersey, because I think for our men’s and women’s programs, it’s a point of honor to put ‘Arkansas’ across your chest.”