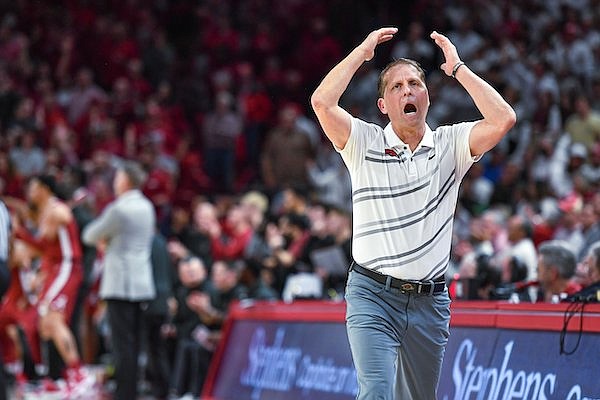 Arkansas coach Eric Musselman is shown during a game against Alabama on Wednesday, Jan. 11, 2023, in Fayetteville.

FAYETTEVILLE — For the third consecutive season, the University of Arkansas men’s basketball team is off to a rough start in SEC play.

The No. 15 Razorbacks fell to 1-3 in conference games when No. 4 Alabama beat Arkansas 84-69 on Wednesday night at Walton Arena.

Arkansas came back strong both times to finish 13-4 and 13-5 in SEC games and advance to back-to-back NCAA Tournament Elite Eight appearances.

So the Razorbacks (12-4) have the rest of the SEC right where they want them, right?

Not exactly according to Eric Musselman, who is in his fourth season as Arkansas’ coach.

Freshman guard Nick Smith, a preseason All-SEC first team pick and projected NBA Draft top-five selection, has missed the past five games — and 11 on the season — with a knee injury and continues to be out indefinitely.

Musselman has said he expects Smith to be out at least for the rest of January.

There’s no timetable for Smith’s possible return after he missed the first six games, played in the next five, then had to sit out again.

“I do think this team is playing hard, but we’re offensively-challenged,” Musselman said. “That’s a fact. That’s not an opinion.”

The Razorbacks are averaging 64.8 points in SEC games and shooting 40.3% from the field and 19.4% on three-pointers.

“There would be a lot of other teams offensively-challenged, too, if two players you built your roster around aren’t here,” Musselman said. “But nobody cares and there’s other injuries throughout athletics in all different sports in the professional ranks and the college ranks.”

In the three games in which Smith played at least 24 minutes — against San Jose State, Oklahoma and North Carolina-Greensboro — he averaged 19.7 points.

Brazile, a 6-10 transfer from Missouri, averaged 13.2 points and 6.5 rebounds in the first eight games before tearing the anterior cruciate ligament in his right knee against UNCG.

“Injuries are a part of the game,” Musselman said. “But we’re missing two guys that we had projected to play right around 60 minutes [per game] for us.”

The Razorbacks put themselves in position to beat Alabama when they pulled within 65-63 with less than five minutes left after trailing 62-50. But the Tide (14-2, 4-0) responded with a 13-0 run to put the game away.

It was Alabama’s fifth victory over a ranked team away from home this season, highlighted by taking down No. 1 Houston 71-65 on the road.

“They’ll get it figured out,” Alabama Coach Nate Oats said of the Razorbacks. “Sometimes I think they have to play a few tough games in the conference before they figure themselves out.

“But based on what they’ve done here in the past, I’m sure they’ll get it figured out. This is going to be a huge road win for us.”

Arkansas senior center Makhel Mitchell made his first start against Alabama when Musselman decided to go with a bigger lineup and had 5 points, 4 rebounds and 2 blocked shots.

“There’s just a few things that we’ve got to fix and then I feel like we’re going to be right there,” Mitchell said. “So I feel like our confidence level is still high.”

Two years ago, Arkansas senior forward Justin Smith injured his ankle in the Razorbacks’ 97-85 victory at Auburn in the SEC opener, underwent surgery and missed the next four games in which they went 1-3. He then was limited to 18 minutes in the Razorbacks’ next game, a loss at Alabama when they fell to 2-4.

Smith, a transfer from Indiana, was able to return full strength for the rematch against Auburn that Arkansas rallied to win 75-73 after trailing by 19 points. It was the start of 16 consecutive victories against SEC teams.

Notae returned for the conference home opener against Vanderbilt and scored 16 points, but he clearly was rusty and shot 6 of 17, including 1 of 7 on three-pointers, and the Commodores won 75-74.

Then the Razorbacks got rolling with an 87-43 victory over Missouri at Walton Arena to turn the season around.

Arkansas also went through a rough stretch in Musselman’s first season in 2020-21 with five consecutive SEC losses when guard Isaiah Joe — now in the NBA with Oklahoma City — was out because of a knee injury.

With Joe back, the Razorbacks won four of their next six games — including the SEC Tournament opener against Vanderbilt 86-73 — and finished 20-12 when the season was shut down by the coronavirus pandemic.

“We struggled when both of those guys were out,” Musselman said of Joe and Justin Smith. “But I thought when Isaiah came back, we changed things quickly. Certainly Justin’s first game back we struggled at Alabama, but I thought we were able to gain some momentum.”

If the Razorbacks are to gain some momentum now, it will have to be on the road with their next two games at Vanderbilt on Saturday and at No. 20 Missouri next Wednesday.

“I want to be perfectly clear — there is no excuse,” Musselman said of the injuries. “We’ve got to keep searching and trying to figure it out.”