What to watch for in Arkansas-Vanderbilt 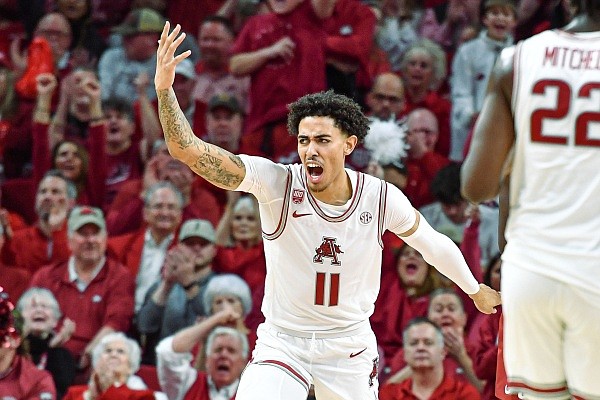 Arkansas forward Jalen Graham (11) celebrates his made basket, Wednesday, Jan. 11, 2023, during the first half against Alabama at Bud Walton Arena in Fayetteville. Visit nwaonline.com/photo for the photo gallery.

The Arizona State transfer in Wednesday’s loss to No. 4 Alabama was brilliant on the offensive end.

Graham finished with 16 points — matching a team high and season high — and went as deep into his repertoire of moves and crafty shots as he has at any point in 2022-23. Multiple times he caught the ball at or near the three-point line and wound up with a bucket around the rim.

Graham also hit the Crimson Tide with a couple of post-up scores and even a push shot from the free throw line not unlike the one former forward Justin Smith brought out late in his lone season at Arkansas. He was great, and the Razorbacks scored nearly a half-point more per minute when Graham was on the floor (1.98) than when he wasn’t (1.49).

However, he was responsible for an Alabama three-pointer that Arkansas coach Eric Musselman said changed the complexion of the game’s final minutes. He left Crimson Tide forward Noah Clowney alone in the right corner for a triple that pushed Alabama’s lead to 68-63 with 4:32 left and kickstarted the decisive run.

When the pass from guard Mark Sears left his hands from a step inside the top of the key, Graham had a foot at the top of the charge circle in the lane. Being a step or two away from where he should have been with the ball in the middle of the floor was costly.

Graham’s minutes have been sparse this season because of defensive limitations. Alabama players, however, were 2 of 9 from the floor – 1 of 6 inside the arc – Wednesday when Graham was the nearest Arkansas defender to a shot.

The time may be now for more run for the forward given Arkansas is stuck in the mud on offense.

Graham’s offensive game can come off as unorthodox at times, but he is wired to score. And to his credit, he is shooting 80.8% at the rim this season on 26 attempts, according to CBB Analytics, and 9 of 18 on other attempts in the lane.

Vanderbilt has allowed SEC opponents to make 50.5% of two-point attempts, per KenPom data. That figure ranks ninth among conference teams.

The Commodores are also 11th in league-only games in defensive efficiency (113.5 points per 100 possessions) despite strong rim protection from 7-foot center Liam Robbins, who has 10 blocks in 3 SEC games.

With all that said, we’ve come to learn that a big bench performance does not guarantee minutes the next time out. Each game is about matchups, so we will have to wait and see what kind of impact, if any, Graham has Saturday.

In Musselman’s final two seasons at Nevada and his first at Arkansas, his teams landed in the top 25 in the country in offensive turnover percentage, per KenPom data, and the 2017-18 Wolf Pack team that advanced to the Sweet 16 finished No. 1.

They committed a turnover on only 13.5% of their possessions.

Through 16 games this season, the Razorbacks have the highest turnover rate (18.1%) of any team Musselman has coached at the college level, per KenPom. In SEC games, Arkansas’ first four opponents have forced it into a mistake on 20.2% of possessions.

Zoom out and look at this on a national scale, that figure would rank around 274th nationally. Teams such as San Jose State and Southern Illinois have also turned the ball over at a 20.2% clip this season.

Here is a breakdown of Arkansas’ turnovers in conference games, according to StatBroadcast:

— 1 stepped out of bounds

Among the chief concerns offensively is a couple of the Razorbacks’ primary ball handlers have committed the lion’s share of the turnovers. Ricky Council and Anthony Black have 29 of the team’s 56 through 4 games.

Council has 15 turnovers to 5 assists in league play, and Black has 14 assists versus 14 turnovers. Davonte Davis is the lone player on the roster with more assists (12) than giveaways (7) against conference competition.

Arkansas can ill afford to shoot the ball poorly and turn it over. If the Razorbacks can consistently get a shot on goal, which Musselman has preached since he arrived in Fayetteville, they have a decent chance to grab a potential miss.

Arkansas is averaging 13.8 offensive rebounds per game in the SEC. Finishing second-chance opportunities is another story, but the Razorbacks could see a slight uptick in efficiency simply by getting up a look.

• An appearance from Jordan Walsh

Walsh had a solid SEC debut at LSU, finishing with 13 points, 9 rebounds, 2 blocks and 2 steals.

He did struggle with his perimeter jumper — 1 of 8 from three-point range — but many of the attempts were high-quality. Walsh was 5 of 6 on two-point attempts that night and at his best when getting into the lane and to the rim.

Since the league opener, Walsh has remained solid in terms of rebounding (6.3 per game), but his offense has dipped to 4.7 points on 28.6% shooting, and his three-point struggles have continued. Dating to the LSU game, he has misfired on his last eight attempts.

Walsh is 1 of 14 from distance against SEC opponents.

He has been impacted by foul trouble in each conference game, picking up 4 in 3 of 4 outings. In Wednesday’s loss to Alabama, Walsh was hit with his second foul at the 12:49 mark of the first half and did not return prior to halftime. He then did not start the second half.

Walsh had only 2 points and 2 rebounds in 17 minutes vs. the Crimson Tide. Arkansas needs more.

The long-armed freshman can be a difference-maker when engaged defensively. Beginning with the win over Oklahoma in Tulsa on Dec. 10, he had a stretch in which he tallied 11 steals in 5 games, but he does not have 1 in the team’s last 2 losses.

And on the other end, the Razorbacks desperately need a player who can stretch the floor, prevent defenses from packing things in, and make aggressive off-ball cuts. Walsh is an ideal candidate.

Right now it appears he is experiencing some freshman growing pains and trying to figure out the best courses of action against the raised level of competition.

Walsh credited his big game against the Sooners to a pre-tipoff pep talk from Musselman. It may be time for another one with two critical road games looming.

• Can Arkansas get out and run?

The Razorbacks, even without guard Nick Smith and forward Trevon Brazile, have a number of players more than capable of putting immense pressure on defenses in transition chances. But there has not been a lot of that in SEC play.

Arkansas is averaging 8.5 fast-break points per game to this point, 4.1 fewer than a season average that ranks 67th nationally. The Razorbacks scored a combined nine transition points in losses to Auburn and Alabama.

Pushing the pace is one of the most effective ways to limit facing a set defense, which Arkansas has struggled against. According to CBB Analytics, the Razorbacks in league games have scored at a 0.83 point-per-possession rate on possessions that go into the final one-third of the shot clock.

That number is brought down by the fact they are 2 of 26 from three-point range in that timeframe.

Arkansas’ numbers aren’t great early in possessions either — 0.84 PPP in the first 10 seconds of the shot clock — but it has finished 18 of 27 two-point attempts, per CBB Analytics. Overall efficiency, again, has taken a hit due to a lack of perimeter shooting (1 of 12).

Vanderbilt’s transition defense has been sound in SEC games against South Carolina, Missouri and Tennessee. The Commodores have given up an average of seven fast-break points, including six against the Volunteers on the road.