Wieber adjusts lineup for meet with No. 8 Alabama 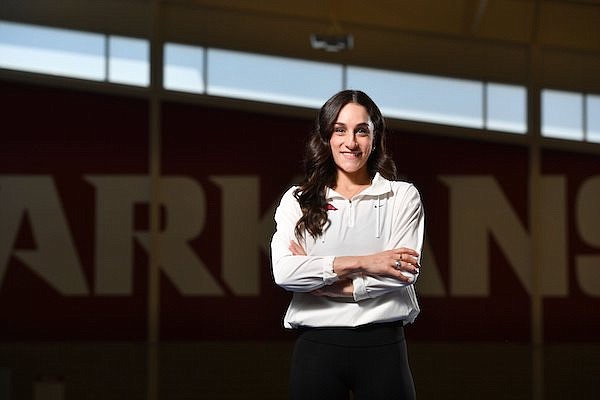 FAYETTEVILLE — The University of Arkansas gymnastics team will likely add some veteran routines to its lineup tonight in an effort to get a breakthrough win against a long-time nemesis.

Fourth-year Arkansas Coach Jordyn Wieber said she intends to add to the workload senior Bailey Lovett and graduate transfer Norah Flatley after freshmen competed 10 of 24 routines last week in a 196.225-to-195 win at Nebraska.

“We’re planning on having Norah come in on the floor [exercise] lineup and Bailey as well,” Wieber said. “That’s the plan right now. They both have fantastic, exciting floor routines.

“We’ve seen Bailey perform well numerous times and Norah has one of the most difficult floor routines in the NCAA with a triple on her first pass and a front double full on her second pass, two E-level elements.”

Wieber said balance beam landings and vault landings are areas of concentration after the Razorbacks took several deductions on those events last week.

“We did really, really big vaults and took too much [deduction] on over-rotating our vaults,” Wieber said. “Vault is the hardest one to simulate in practice because you never quite feel that same amount of adrenaline.

“So somebody like Frankie Price or Leah Smith both did humongous vaults but took probably two tenths on their landings. That’s one we really need to dial in on. The thing I liked was we didn’t go small. We went big.

The Razorbacks have lost 14 consecutive competitions against Alabama, including seven in the past two years and five consecutive duel meets since Arkansas notched a 195.825-to-195.325 win at Barnhill on Jan. 27, 2017. That came in a stretch when the the Razorbacks won three of five meetings in the series between 2015-17.

Otherwise, the six-time national champion Crimson Tide have dominated with a 46-5-1 head-to-head record.

Wieber pointed out two relative newcomers who had great performances last week in true freshman Lauren Williams of Bentonville, and redshirt freshman Cami Weaver, who returned after suffering a season-ending knee injury on the vault in her first collegiate event last year.

“One of the highlights for us was Cami Weaver coming back from her injury last year and competing really well on vault, a 9.85, and then beam, 9.825,” Wieber said. “She can be better on beam. She knows it. There were a few intrsquads where she was going 9.9, 9.95.

“Really really pleased with Lauren Williams hitting a great vault, and then her floor routine was awesome. I felt it was a little underscored to be honest.”

Alabama, led by first-year Coach Ashley Priess Johnston, a former Tide All-American, scored less than 49.25 on only one event in its season debut, a 49.125 on the balance beam.

Alabama is coming off a 196.975-to-196.55 win over Michigan State last week. It was the Tide’s second-highest season-opening score in school history.

Senior Luisa Blanco scored a 39.575 to win the all-around, while also taking titles on the floor exercise (9.925) and balance beam (9.9). Senior Makarri Doggette won the other event titles with 9.9s on the vault and bars, and was second in the all-around at 39.375.

The Razorbacks will honor former Arkansas All-American Katherine Grable, who won the vault and floor exercise at the 2014 NCAA Championships, during the meet.