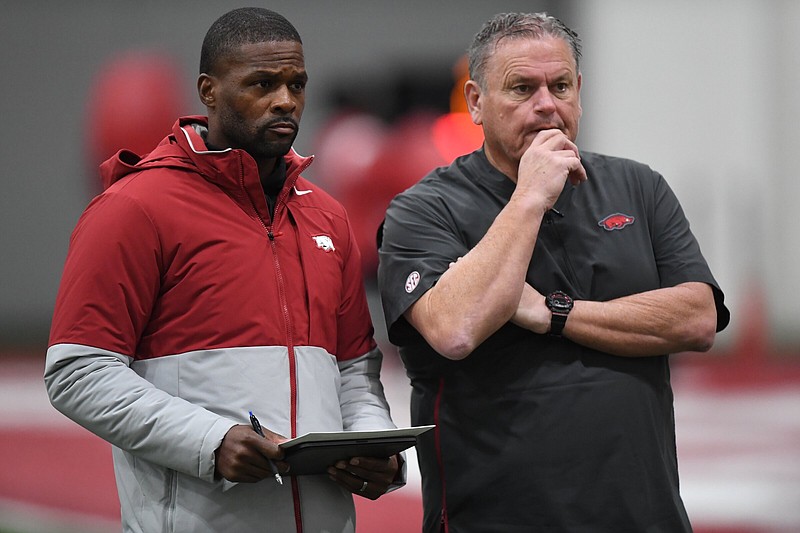 The two have spoken on the phone several times, but Collins said the in-person meeting was better.

“The visit was great,” Collins said. “I had a chance to chill with Coach T Will. He really changed my perspective of Arkansas. He made them bump up a few digits. An amazing guy, beautiful soul — just a great all-around person. I was just hanging out with him all day. It was really the purpose of me coming down, getting to know him better.”

He said Williams is relatable.

Collins recorded 124 tackles, 46 tackles for loss, 12 sacks, 5 recovered fumbles, 4 pass breakups and 1 forced fumble last season. On3.com rates Collins a 4-star prospect, the No. 10 defensive lineman and No. 132 overall prospect in the nation in the 2024 class.

Williams explained how he would be used if he became a Razorback.

“He said we’ll start out outside and eventually as I gain my weight back and mass up, I’ll more so move inside and be more of a hybrid type of player,” Collins said.

He likes what Williams has in mind for him.

“I love it,” Collins said. “Thats kind of what I saw myself anyway, so just seeing me and him have the same mindset and same path, it really lit a spark in me.”

The visit was his seventh since he started being recruited by the Razorbacks. He praised the other coaches and support staff.

“I love the staff from the recruiting coordinators to the recruiting girls,” Collins said. “Everybody is always family. It’s a word I can describe it all, a family vibe. Everybody knows one another. Everybody hugs and handshakes.”

His relationship with defensive line coach Deke Adams is strong and Saturday gave him another opportunity to spend time with him.

Adams' son, Jordyn, gave his father a steering wheel with his initials engraved in it. Adams showed off the gift to Collins.

“He has a pretty cool car, Scat Pack, so it’s pretty cool,” Collins said. “He had a custom steering wheel. His son gave it to him on Father's Day.”

Collins planned to visit Texas on Jan. 21 but it appears he’ll try to reschedule so he can make a return trip to Fayetteville next Saturday.

“I’m trying to move Texas up sometime during the week, so that way I can get back down for the (basketball) game next weekend,” he said.