Vandy rallies to beat Arkansas with 63-point second half 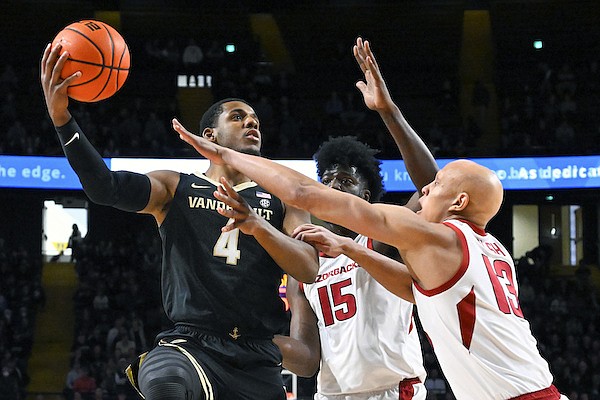 The Commodores, though, flipped the script on the Razorbacks and dropped them to 1-4 in league games with a 97-84 victory in Nashville, Tenn.

It was Arkansas’ first loss at Vanderbilt since February 2013.

For Vanderbilt, it is the program's first home win over a ranked opponent since Feb. 20, 2020, against LSU.

The Razorbacks led by as many as 10 points late in the first half and early in the second half behind strong play from wing Ricky Council and guard Anthony Black. Forward Makhi Mitchell’s first three-pointer of the season gave Arkansas a 50-40 lead with 17:37 remaining.

That was as good as it got for the Razorbacks, who were outscored 63-42 in the second half.

The Commodores answered by knocking down 5 three-pointers in the next four-plus minutes. Vanderbilt’s Jordan Wright knocked down a triple with 12:40 to play that gave the Commodores the lead for good at 59-56.

Vanderbilt made its first 5 second-half three-point attempts and 6 of its first 7.

Commodores center Liam Robbins was among the biggest difference makers in the game. He scored 14 points and blocked three shots, all in the second half, before fouling out with 1:48 remaining.

Vanderbilt was led by 22 points from Tyrin Lawrence and 17 from Wright, who scored 15 after halftime. Guard Trey Thomas also scored all 13 of his points after halftime, and forward Myles Stute had 8 of his 15 points in the second half.

The Commodores led by as many as 14 points.

For Arkansas, Council scored a game-high 24 points on 8 of 12 from the floor, and Black pitched in 18 points on 7-of-15 shooting. Davonte Davis finished with 17 points, and Mitchell scored 11 points and grabbed 8 rebounds in 22 minutes before fouling out.

The Razorbacks return to SEC play on Wednesday at Missouri. Tipoff is set for 8 p.m. on SEC Network.