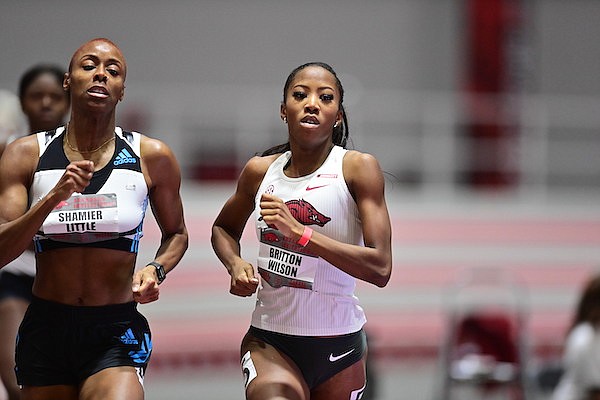 Arkansas' Britton Wilson runs during the Arkansas Invitational on Friday, Jan. 13, 2023, in Fayetteville.

FAYETTEVILLE — The exclusive club of former Arkansas high schoolers to run a sub 4-minute mile got a new member on Friday night.

Lexington Hilton, who grew up in Fayetteville before attending Green Forest High School, became the fourth Arkansan to break 4 minutes in the mile.

Making his debut for the University of Arkansas, Hilton ran 3 minutes, 58.70 seconds to win at the Arkansas Invitational.

“It was super cool,” Hilton said of seeing his time posted on the Randal Tyson Center scoreboard. “It’s like a dream come true being an Arkansas kid and representing this school.”

Baker attended Batesville High School and Lincoln attended the Arkansas School for Mathematics, Sciences and the Arts in Hot Springs.

“I’m definitely proud of that,” Hilton said of being the fourth Arkansas high school product to break 4 minutes. “Really happy to go out and be able to run that time and represent my state.”

Hilton, a junior, transferred to Arkansas last year from Arkansas State University. He began his college career at Southern Arkansas University, and because he wasn’t granted a release by ASU as a second-time transfer, he had to sit out last year’s track and field season and last fall’s cross country season.

“Lex is a great competitor and he waited a long time to put the Razorback uniform on — maybe longer than he should have waited,” Arkansas men’s Coach Chris Bucknam said. “Just really happy for the young man.”

“I think Mu is one of the icons of women’s track and field collegiately,” Arkansas women’s Coach Lance Harter said. “So to be able to take the first meet of the year and break her record is a real tribute to the gifts and the hard work that Britton Wilson lives by.”

Wilson, who won the NCAA 400-meter hurdles title last year, finished second in the 600 behind Shamier Little, a former Texas A&M NCAA champion who trains with her in Fayetteville.

Wilson also ran a leg on Arkansas’ 1,600 relay that won in 3:30.38 and included Amber Anning, Nickersha Pryce and Ashanti Denton.

“We just had across the board some really positive initial events of the year,” Harter said. “A lot of people may view it as a rust-buster or whatever, but I think it was a tribute to what these kids took care of in the fall [training] and during the Christmas holidays.

“We still didn’t compete our entire team, so I think there are a lot of elevated expectations yet to come.”

Johnathan Jones, a sophomore from the University of Arkansas-Little Rock who attended Little Rock Central High School, cleared 6-11 to win the high jump.

“I think we showed the depth of our program across many events,” Bucknam said. “Very, very pleased with how we competed and started off the season.”

“It hurt waiting, but I’m just glad to be able to be out there now,” he said. “It’s the best decision I’ve made.”

“I didn’t start running distance races until junior year in high school,” Hilton said. “So I had a lot to unlock.”