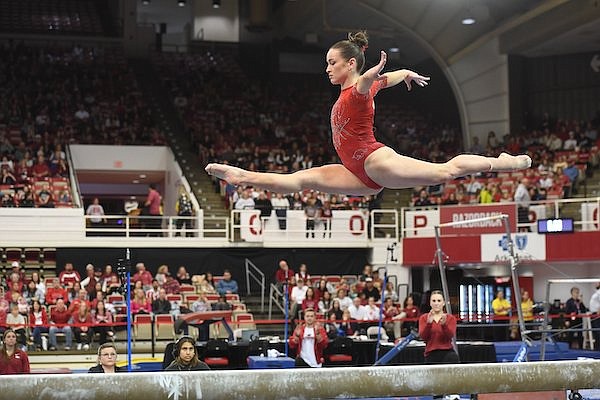 Arkansas' Norah Flatley competes Friday, Jan. 13, 2022, in the bar competition of the Razorbacks' meet with Alabama in Barnhill Arena in Fayetteville.

FAYETTEVILLE — On a night when No. 8 Alabama showed vulnerability, the No. 16 Arkansas Razorbacks could not capitalize in the SEC opener for both schools on Friday.

The University of Arkansas (1-1, 0-1) fell out of contention on the second rotation, even as the Crimson Tide (2-0, 1-0) struggled with all of its landings on the vault.

The uneven bars were a major problem for the Razorbacks, as freshman Cally Swaney fell and freshman Reese Drotar had a major error in the first two spots in the lineup. When senior Kennedy Hambrick had a fall from the high bar in the fifth spot, Arkansas was forced to count two falls and scored a rock bottom 47.7

Had the Razorbacks even managed an unsightly 48.7 on the event they would have won the meet.

Speaking on the public-address system and asking the crowd to attend the Razorbacks’ next home meet against LSU on Jan. 27, Arkansas Coach Jordyn Wieber said, “I promise you we’ll work on our bars.”

Later, Wieber told the media, “I feel like a couple of young ones got a little nervous early in the lineup, so now they know what it’s going to feel like with a home crowd and a little added pressure. The ones that went after the ones who made a mistake just tried a little too hard.”

Alabama, which came out of the gates with a 196.975 in its season opener, scored 49.0 on the vault in the second rotation, allowing the Tide to hit the halfway point with a commanding 98.3 to 96.9 lead.

“I’m really proud of the team for showing resilience tonight,” first-year Alabama Coach Ashley Johnston said. “We had a couple of uncharacteristic mistakes and they did a really good job of not letting that affect their approach and they just kept … chipping away.”

The Razorbacks lost their sixth consecutive dual meet to the Crimson Tide and dropped their eighth straight dual- or tri-meet in conference action.

Wieber was pleased with every other event outside of the bars.

“I thought our vault rotation was fantastic and I think it was a little bit under-scored,” she said. “We’ve got to clean up landings even more than we showed tonight. Beam and floor were a great finish. I was really proud of how they pulled it back on those events. Floor was just a party and that’s what we want to feel on that last event.”

A bright spot for Arkansas came from graduate senior Norah Flatley, who posted a 39.575 to win her first all-around as a Razorback. Flatley also took titles on the balance beam and vault with 9.9s and she shared the bars title with teammate Jensen Scalzo and Alabama’s Luisa Blanco at 9.9.

Arkansas freshman Lauren Williams of Bentonville captured her first individual title, taking the floor exercise with a 9.9 to edge out teammates Flatley and Bailey Lovett, who both scored 9.875.

Alabama had six pinpoint landings on the bars, led by Blanco’s 9.9, in the opening rotation and forged a slight lead at 49.3 to 49.15.

After falling behind by 1.4 points, Arkansas made up ground by gaining more than 3/10ths with a 49.325 on the balance beam, while Alabama was posting a 49.0 on the floor exercise.

Alabama was a little shaky on the floor exercise, then their ace Blanco had a fall in the anchor position on the balance beam, helping the Razorbacks pick up more ground in the final rotation.