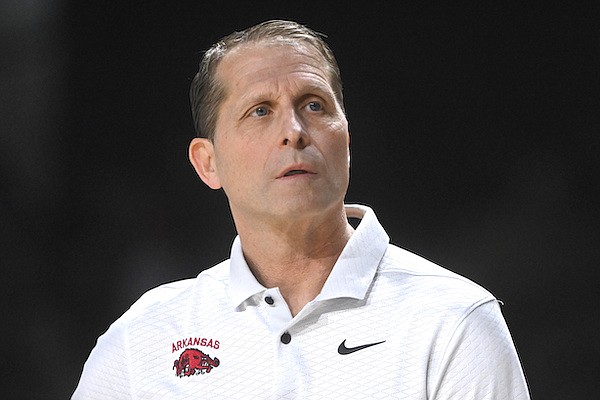 Arkansas went on a run in the first half to take a 42-34 lead into intermission Saturday. Vanderbilt went on runs in the second half and put the Razorbacks away 97-84.

In the first half, it appeared that between last Wednesday’s loss to Alabama and Saturday, the Razorbacks had greatly improved their outside shooting — hitting 55.2% while making 16 of 29 attempts.

It was the Commodores who put on a shooting clinic in the final 2o minutes, hitting 18 of 26,, 6 of 9 on three-pointers that was good for 69.2% in the critical second half.

Arkansas was 15 of 34 to close the game, which isn’t that bad, but the Hogs couldn’t stop Vandy, which was averaging just 71 points a game coming into Saturday’s SEC game.

Traditionally, Eric Musselman’s teams at Arkansas have started slow and finished strong, starting to peak in late January. But this a younger team than Musselman has fielded as he starts two true freshmen. Granted, they are McDonald’s All-Americans, but the SEC has become a talented coaches league.

Ricky Council returned to Arkansas’ starting lineup and led all scorers with 24 points.

Musselman might be having a conversation with the SEC. This was the second consecutive game a Razorback opponent has shot 36 free throws. Vanderbilt made 29 of 36 and Bama 25 of 36.

That’s not to make excuses, but in those games the Razorbacks attempted 23 and 24 free throws.

Arkansas doesn’t usually lose to Vanderbilt and owns a 39-13 advantage. But so far this basketball season has an odd feel to it and it isn’t restricted to the SEC, which is led by Alabama and not Kentucky.

The Wildcats picked up their second league win Saturday by beating No. 5 Tennessee, so they may be about to break out. But Big Blue had started to take on a different meaning since last season’s NCAA Tournament, when the No. 2 seed Wildcats were beaten by No. 15 St. Peter’s.

St. Peter’s did make it to the Elite Eight , where they were eliminated by North Carolina, which opened this season as the No. 1 team in the country.

But the Tar Heels, considered one of the elite programs in the country, are currently 12-6 and 4-3 in ACC play and are tied for seventh in the conference standings.

Their archrival Duke, another storied program, is tied for third place.

The leader of the ACC is Clemson, a nationally-known football school.

Michigan State usually sits atop the Big Ten standings but are in second right now and not looking like a Final Four team.

There is some normalcy in the Pac-12, where UCLA is leading the way, and Kansas is currently undefeated in Big 12 play. But so is Iowa State, which looks really good.

Alabama is playing like a blue blood in the SEC.

Yet with all those big names and a lot of basketball still to be played it appears, the team to beat is the Houston Cougars, who are No. 1 the country.

Arkansas is sitting at next to last in the SEC at 1-4 and their fans are saying thank goodness for Mississippi, which is winless in league play and 8-9 overall.

The Razorbacks are a long way from being out of it and Musselman has proven to be a magician in is first three seasons. But these youngsters present a different kind of challenge, and it starts with experience and defense.

Arkansas goes to Missouri on Wednesday — the Hogs beat the Tigers 74-68 at Walton Arena just 11 days ago — and then host Ole Miss next Saturday.

The Razorbacks showed signs of improvement in their shooting against Vandy, and they fought to the very end. Not sure what they can do about back-to-back opponents shooting 36 free throws other than call the SEC.