No defense: Hogs collapse after halftime at Vanderbilt 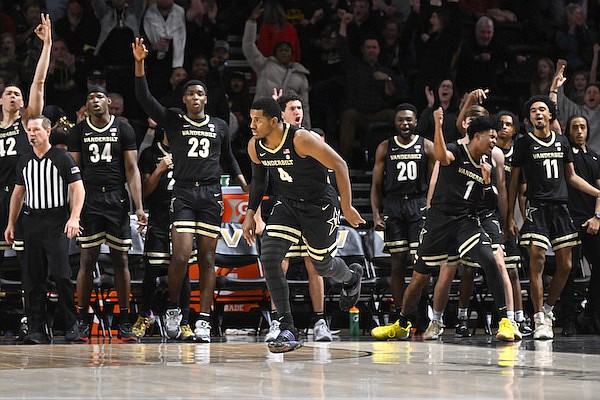 Vanderbilt's Jordan Wright (4) hits a three pointer and the bench reacts during the second half of an NCAA college basketball game against Arkansas Saturday, Jan.14, 2023, in Nashville, Tenn. Vanderbilt won 97-84. (AP Photo/John Amis)

The University of Arkansas men’s basketball team finally had a good SEC game on offense.

But defense suffered a massive meltdown in the second half on Saturday when Vanderbilt beat the No. 15 Razorbacks 97-84 at Memorial Gymnasium in Nashville, Tenn., before an announced crowd of 9,362.

It was the most points the Razorbacks have allowed in a second half since Auburn scored 64 in beating Arkansas 101-76 in 1996, according to Hogstats.com.

The only higher scoring game for an opponent in Eric Musselman’s four seasons as the Razorbacks’ coach came in Georgia’s 99-90 victory over Arkansas in 2020, when the Bulldogs scored 52 points in the second half.

“I mean, I’ve coached a lot of games and can’t remember a defensive team giving up 63 points in a half,” said Musselman, who has a 195-67 record in eight seasons as a college head coach at Nevada and Arkansas. “As the game progressed, the competitive nature slipped.

“And so you get the results of a team scoring 97 points on you, and a team that scored 63 in a half.

“We have to be much more competitive.”

“For much of the season, offensive struggles have been the problem,” Musselman said. “Today certainly, defense was a major, major issue.”

After Arkansas took a 50-40 lead with 17:37 left on senior forward Makhi Mitchell’s first three-point shot of the season, Vanderbilt outscored the Razorbacks 57-34 the rest of the game.

“When they weren’t hitting threes, they were getting to the free-throw line almost every possession, so it was really tough,” said junior guard Ricky Council, who led Arkansas with 24 points. “It seemed like that the whole second half half.”

The Commodores started 6 of 7 on three-pointers in the second half and took the lead for good at 59-56 with 12:40 left on a three-pointer by senior guard Jordan Wright.

Arkansas didn’t pull closer than six points the rest of the game.

“They started hitting threes, which was our game plan to prevent them from doing,” Council said. “And that got the crowd into it. That got them into it.

“I felt we were never able to bounce back from that point. We were playing catch-up until the end of the game.”

The Commodores hit 13 of 14 free throws in the final 2:58 to hold off the Razorbacks.

“That was a hard-fought game,” Vanderbilt Coach Jerry Stackhouse said. “Our guys played their butts off. They competed.

“That second half, they did exactly what we’ve been talking about. They led by example. No rah-rah, nothing but going out there and executing and being the veteran team that we are.”

Junior guard Tyrin Lawrence led Vanderbilt with 22 points. He hit 7 of 14 shots, including 2 of 2 on three-pointers, and 6 of 8 free throws.

“I thought Lawrence dominated us off the dribble,” Musselman said. “The scouting report was no dribble-drives left, and he continually went left and blew by us. … He was more aggressive with his hard dribble-drive left than maybe what our guys understood.”

Robbins scored 14 points — all in the second half — before fouling out with 1:48 left.

“We knew we had to play our best ball,” Robbins said of the Commodores’ dominant second half. “We executed what Coach Stackhouse drew up on the board, and obviously the result showed up.”

After being limited to one minute in the first half when he drew two fouls, Robbins hit 4 of 5 shots and 5 of 5 free throws in the second half in 18 minutes.

“I thought Robbins was absolutely incredible in the second half,” Musselman said. “I thought he was a dominant force. We did want to go at him and try to get him in foul trouble, which we did in the first half.”

Vanderbilt got its first victory over a ranked team since last season when the Commodores beat No. 25 LSU 75-66 in Memorial Gymnasium.

Arkansas freshman guard Anthony Black had 18 points, 6 rebounds and 3 assists, but a rough second half when he shot 1 of 7 and had all 4 of his turnovers.

“We changed our defensive coverage and made an adjustment,” Wright said of shutting down Black in the second half. “We decided to put a little more pressure on him and make him uncomfortable. He was a little too comfortable in the first half getting to his spots.

“So we wanted to get into him, aggravate him a little bit, and I think as the game wore on, he got a little bit tired.”

“We shot the ball much better than we have, especially from three,” Musselman said. “And then we didn’t play with defensive intensity at all.