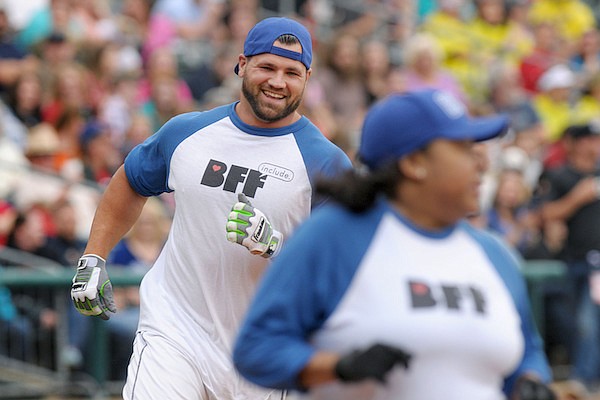 Former Arkansas and NFL running back Peyton Hillis runs the bases while playing in the second annual "A League of Their Own" reunion softball game on Sunday, May 8, 2016, at Arvest Ballpark in Springdale.

They moved about quietly with candles in the darkness at Champions Stadium while soft music played from a speaker in the background.

Men and women held tightly to children, children held onto each other, and a few adults stood alone before all were called to join together in a circle with a single purpose in mind.

This was the scene one week ago when about 50 people gathered on the football field at Shiloh Christian High School during an informal prayer vigil for Peyton Hillis, who helps with the school’s youth football program. Bryant Davis, a teacher and football coach at Shiloh Christian, led the prayer session for Hillis, who remains in critical condition after a near-drowning incident in Florida.

“Our God is a God who answers prayers and Peyton needs prayer,” said Davis, who is the director of the Youth Football Program at Shiloh Christian. “Our goal here is to glorify God and to make sure that Peyton and his family feel love and support.”

A week later, prayers are still requested for Hillis, the former University of Arkansas and NFL running back. Hillis has spent several days in a hospital intensive care unit after he inhaled sea water while rescuing a family member his two children in the Gulf of Mexico near Pensacola, Fla. Hillis suffered damage to his lungs and kidneys but progress has apparently been made according to his girlfriend, Angela Cole, who posted on social media that Hillis is no longer on a ventilator.

“Peyton is off the ventilator and on the road to recovery,” Cole wrote.”Please continue to pray for he’s still got a ways ahead of him, but thank you for all of your prayers and love and support thus far. It truly makes all the difference.”

Attention has turned to the former No. 22 for the Razorbacks following the recovery of the Buffalo Bills’ No. 3, Damar Hamlin, who spent several days in two hospitals and is now discharged after suffering a cardiac arrest during a game at Cincinnati on Jan. 2.

Prayers for Peyton, prayers for Damar. Also, be thankful of the quick actions and skill of the doctors and emergency medical teams involved because prayers without action are like a playbook without players.

Those of us who closely follow high school sports in Arkansas knew about Peyton Hillis long before he played for the Razorbacks and then moved on to the NFL. Hillis was the subject of a feature story accompanied by a photo of him pulling a truck around on the streets of Conway, where he was a star running back and linebacker for the Wampus Cats.

I got an eyeful of Hillis during a playoff game when he bullied and ran over a Springdale team coach by Gus Malzahn. Davis, who played high school football at Harrison for Tommy Tice, got an even better view of Hillis’ power and skill during a preseason scrimmage game with Conway at Jarrell Williams Bulldog Stadium.

“Peyton was the story of the summer that year,” Davis said. “We knew he was pulling trucks and lifting a ton of weight. During the scrimmage, they ran a toss sweep to the left and he was the lead blocker. He put the cornerback into the white fences at Jarrell Williams Bulldog Stadium. It was the most devastating block I’d ever seen on a football field.”

Hillis, 36, was part of one of the best backfields in college football history at Arkansas in the mid-2000s along with Darren McFadden and Felix Jones, all future pros. Hillis played seven years in the NFL beginning with the Denver Broncos and he had a massive season with the Cleveland Browns in 2010 when he rushed for 1,177 yards and 11 touchdowns and caught 61 catches for 477 yards and 2 touchdowns for the Browns. That breakout performance led to Hillis making the cover of the popular “Madden NFL” video game.

And now this, years later, when Hillis transitioned from a sports hero to a real-life hero and put himself in danger while preventing a tragedy.