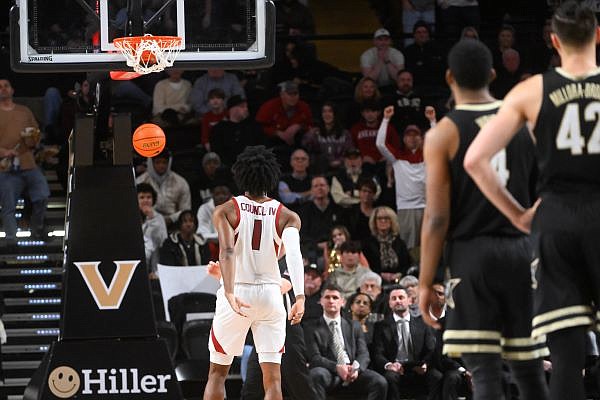 The last 49.8 seconds of the first half of Vanderbilt’s 97-84 victory over the University of Arkansas on Saturday at Memorial Gymnasium in Nashville, Tenn., took several minutes to complete.

Waiting for the officials to sort out a play that results in three technical fouls, an ejection and seven free throws without any time running off the clock can take a while.

It all started when Arkansas guard Anthony Black drove to the basket, hit a layup and drew a blocking foul on Vanderbilt center Quentin Millora-Brown.

As Black was stepping over Millora-Brown — who was laying under the basket in front of the Vanderbilt bench — Commodores guard Ezra Manjon pushed Black from behind.

The officials managed to keep the situation from breaking into a fight among the teams, but Manjon was called for two technical fouls, which resulted in his ejection.

When the officials called Arkansas Coach Eric Musselman and Vanderbilt Coach Jerry Stackhouse together to explain Manjon’s ejection, Stackhouse became agitated, threw down his clipboard and also was assessed a technical foul.

“I didn’t think Ezra should have gotten an ejection,” Stackhouse said. “He did push [Black], so maybe [call] a technical foul, but it’s not a situation that calls for an ejection in my opinion.

“I think Erza pushed [Black] because he was standing on [Millora-Brown’s] foot. … I was like, ‘Where is their technical foul? Where is Black’s [technical] for kind of instigating it all?’

“But that’s kind of how it goes. The second guy is always the one that gets hit. So we’ve just got be smarter in that situation and let our play and our poise speak for themselves.”

In what turned out to be a seven-point possession for the Razorbacks, Black hit a free throw to complete a three-point play resulting from Millora-Brown’s foul.

“It was definitely weird,” Council said. “Probably only done that one other time in my life.

“It was good for us, though, to get a good lead into halftime. But it didn’t really do nothing [to win the game] if you really think about it.”

Council was asked who else he shot multiple free throws against after technical fouls.

Musselman, asked for his take on the multiple technical fouls and resulting free throws, said he didn’t really have one.

“I mean, we missed a couple of free throws and made four,” Musselman said. “But to me, it’s irrelevant in the outcome of the game.”

Vanderbilt guard Jordan Wright said Manjon was waiting to greet his teammates when they came into the locker room at halftime.

“We told him, ‘We’re going to win this game for you,’ ” Wright said. “We came out in the second half with a chip on our shoulder. We wanted to play for him.”

Stackhouse said the technical fouls and Manjon’s ejection ultimately had a positive effect on his team for the second half the Commodores outscored the Razorbacks 63-42.

“I think it rallied us,” Stackhouse said. “Our guys came together.”

Arkansas 6-9 senior Makhi Mitchell, who has been a consistent scorer inside, attempted his first three-pointer of the season and made it with 17:47 left in the game to put the Razorbacks ahead 50-40.

Mitchell hit 7 of 23 three-pointers for Rhode Island last season after not attempting any as a freshman at Maryland or as a sophomore at Rhode Island.

Vanderbilt’s 97 points were its third-highest total against Arkansas in 43 games and the most in 30 years.

The Commodores’ record for points against the Razorbacks came in Vanderbilt’s 102-89 victory at Memorial Gymnasium in 1993.

In the first game Arkansas and Vanderbilt played against each other during the 1963-64 season at Memorial Gymnasium, the Commodores won 101-77.

Vanderbilt beat Arkansas in consecutive games for the first time since 2013, when the Commodores won 67-49 at Memorial Gymnasium and 75-72 at Bridgestone Arena in the SEC Tournament in Nashville.

Arkansas had won seven consecutive games in the series before the Commodores held on for a 75-74 victory at Walton Arena last season.

Arkansas had a starting lineup change for the second consecutive game.

Junior guard Ricky Council, who played off the bench for the first time against Alabama on Wednesday night, started at Vanderbilt with freshman forward Jordan Walsh coming off the bench.

Black and Makhi Mitchel are the only Razorbacks to start all 17 games this season.

Arkansas is 29-14 all-time against Vanderbilt, including 28-13 in SEC games. The Commodores have a 9-8 advantage in home games.

Vanderbilt’s 63 points in the second half were its most in a half since scoring 65 against Savannah State in a 120-85 victory during the 2018-19 season.

Arkansas’ first points of the game involved twin brothers Makhel and Makhi Mitchell. Makhel was credited with an assist when he passed to Mahki, who hit a layup.

Arkansas wore its home white uniforms because Vanderbilt had a “Black Out” game, and the Commodores wore their black road uniforms.