Razorback takes lead in Puerto Rico with record round 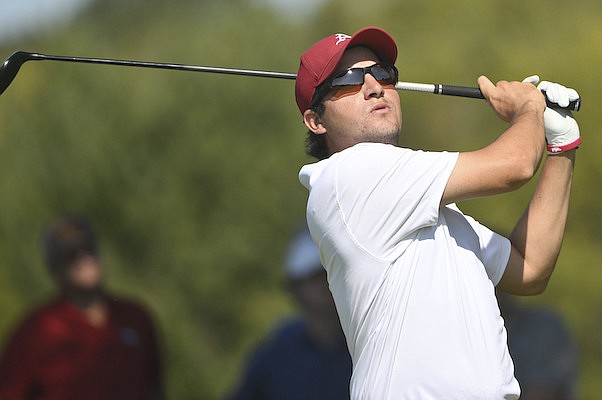 University of Arkansas senior Mateo Fernandez de Oliveira shot a tournament record-tying 9-under 63 on Saturday to seize a sizable lead at the Latin American Amateur Championship.

Fernandez de Oliveira birdied half the holes at the 7,316-yard Grand Reserve Golf Club in Rio Grande, Puerto Rico, including five in a row at No. 11 to No. 15 to reach 18-under par, a third-round record at the LAAC.

The Argentinian will take a four-shot lead over Luis Carrera of Mexico into the final round today.

“It was a good round … and a lot of fun,” Fernandez de Oliveira told the broadcast crew on site. “Personally, I felt in control of my game out there. The putts started to fall on the back nine.

Razorbacks continue to pepper the top of the leaderboard. Senior Julian Perico of Peru fired a 5-under 67 on Saturday to reach 13 under and is in a tie for third place with Argentina’s Vicente Marzilio.

Sophomore Manuel Lozada is alone in fifth place at 10 under after firing a 68.

Senior Segundo Oliva Pinto carded a 4-under 68 to move up 22 spots into a tie for 20th at 2 under for the tourney.