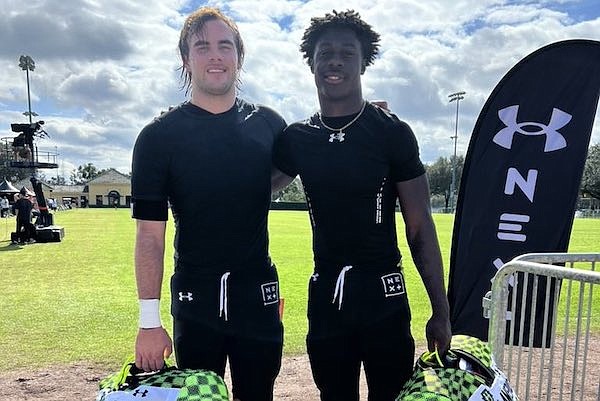 Arkansas freshman tight end Luke Hasz and running back signee Isaiah Augustave after an Under Armour All American practice.

The game was played on Jan. 3 in Orlando, Fla., and nationally televised on ESPN featured a deep group of running backs. Richard Young, an Alabama signee and ESPN’s No. 1 running back in the nation, No. 3 running back in Cedric Baxter and Dylan Edwards, the No. 8 running back, were on hand.

The three are 4-star recruits also ranked the No. 19, No. 40 and No. 156 overall prospects nationally, respectively.

Haubert said the future Razorback showed why he’s one of the top prospects at his position.

“I think he kind of blended and kind of really established himself as kind of one the top backs in the country,” Haubert said. “He has a great frame. Kind of reminds me of a little bit of [Baxter], tall long and lanky. Moves really well. We were talking during the week and he kind of reminded a little bit of Keaontay Ingram, who signed with Texas and finished up at USC.”

Augustave, who will report to Fayetteville after the spring semester, shared the backfield at Naples with 4-star running back Kendrick Raphael, who signed with North Carolina State.

He had 110 rushes for 1,061 yards and 11 touchdowns as a senior while splitting carries with Raphael, who had more than 1,700 yards rushing.

When Augustave committed to the Hogs last summer, he was a consensus 3-star prospect but was elevated later to a 4-star recruit by two services, including ESPN.

Haubert said he believes sharing carries with Raphael — along with Augustave having a low key approach to his recruitment and not being a self-promoter on social media — contributed to some not recognizing his talent.

“Obviously, he wasn’t the sole guy at his own high school,” Haubert said. “Another thing is he’s kind of quiet. He’s a guy that kind of created some buzz and really did well by himself by the way he played. But off the field he’s one of the kind of kids you almost forget he’s there until you see him flash and do something on the field.

“He just kind of goes about his business, which is great. But I also don’t think he’s a big self-promoter or any those type of things as well.”

Hasz, 6-3, 245 pounds, from Bixby, Okla., reported to Fayetteville on Friday to begin classes Tuesday and take part in offseason workouts.

He did nothing to hurt his ESPN top 100 status while in Orlando leading up to the Under Armour game.

“I was really impressed with Luke,” Haubert said. “I think he’s a a guy that very much justified his ranking. I did a Bixby game earlier this year and his coach, Loren Montgomery, was one of the coaches in the [Under Armour] game.

“They said he kind of considers himself one of the offensive linemen. He’s really tenacious. He gets after it as a blocker.”

ESPN currently rates Hasz as a 4-star prospect, the No. 3 tight end/H-back and the No. 87 overall prospect in the nation for the 2023 class.

He showcased his impressive receiving ability during the hands competition in Orlando by placing second to Southern Cal 5-star receiver Makai Lemon during the week leading up to the game.

At the end of the competition, the machine was throwing balls at 45 MPH.

“He made it to the finals against Makai Lemon and he was really good in 1-on-1s,” Haubert said. “I knew he was a good blocker and I knew he was a tough kid, but I came away more impressed by his hands. You think about what Arkansas has done with tight ends. He’s like a home run get for them. I liked him coming into the game but came away more impressed.

“We certainly feel like he justified being one of the top ends in the country.”

Haubert and ESPN will update the rankings later this month. He said he thinks Hasz could see some improvement in the rankings while believing Augustave could get a bigger jump.

“Hasz might get a slight bump,” Haubert said. “Of the two, he’ll [Augustave] be the more likely to rise some just because he has more room to go.”