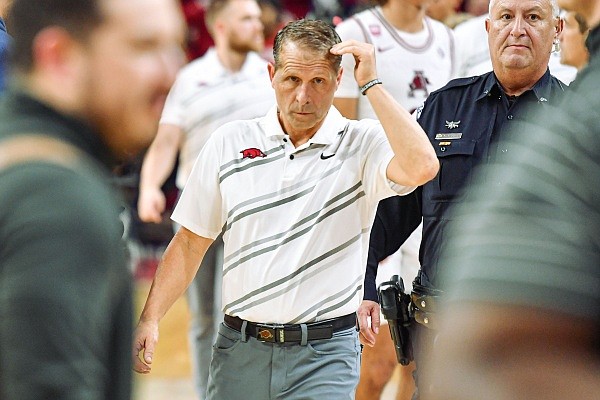 Arkansas coach Eric Musselman walks off the court on Wednesday, Jan. 11, 2023, following the Alabama Crimson Tide’s 84-69 win over the Razorbacks at Bud Walton Arena in Fayetteville.

The Razorbacks, ranked 15th in the Jan. 9 edition of the rankings, fell 10 spots to No. 25 in the latest poll that was released Monday.

According to CollegePollTracker, Arkansas was ranked as high as No. 12 by one AP voter, and 40 voters did not place the Razorbacks on their ballot. They were also No. 19 on six ballots and No. 23 on five others.

Arkansas enters play this week 12-5 overall and 1-4 in Southeastern Conference play. It has lost three consecutive games since a 74-68 home victory over Missouri on Jan. 4.

The Razorbacks last Wednesday fell 84-69 at home to Alabama then let a 10-point second-half lead slip in a 97-84 loss at Vanderbilt on Saturday. They are 0-3 away from home in SEC play, with other losses coming at LSU and Auburn.

"We haven't played very well on the road in the SEC," Musselman said Sunday on his TV show. "A lot of young guys are still trying to figure out how difficult it really is to play in the SEC, and that there's a lot of really good college players.

"We struggled this week, for sure."

Arkansas travels to Missouri on Wednesday for an 8 p.m. tip on SEC Network, and closes the week with a Saturday home game against Ole Miss. It is set to tip off at 11 a.m. on ESPN2.