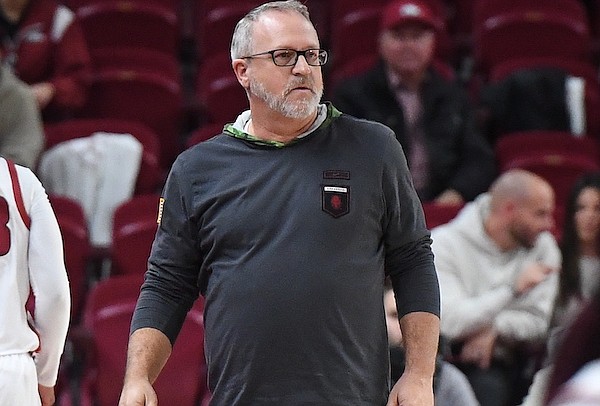 FAYETTEVILLE— After an eight-day pause, the University of Arkansas women’s basketball team returns to action tonight inside Walton Arena.

It’s an opportunity for the Razorbacks to continue riding momentum entering consecutive marquee road games at LSU and South Carolina later in the week.

Prior to the bye, Arkansas responded from an SEC-opening loss to LSU with three dominant wins over Kentucky, Florida and Missouri. Coach Mike Neighbors commended his team’s shot selection and defense following those wins and said he hopes his team will pick up where it left off.

“As a coach, especially coming off as well as we've played—not that we've won, just how we've been playing—how efficient we've been, how we've shared the ball, how we've made shots, I hope we can keep that going,” Neighbors said.

Following three consecutive losses to close the 2022 calendar year, the Razorbacks’ offense has seen an increase in efficiency. During Arkansas’ winning streak, the team has shot no worse than 42% from the floor while limiting opponents to an average of 29%.

Neighbors’ team has also proven it can win in multiple ways. A game removed from hanging 102 points on Florida, Arkansas locked down defensively and handed Missouri its largest home loss since 2019.

“That's when it kind of stings,” Neighbors said. “A little bit of that, ‘Hey, if I'd have taken that shot in the first half that was better, and made it, we would've won.’ I think kids see that, and when it sinks in and it hurts a little bit, I think they tend to now go out on the floor and execute a little bit better. We started taking better shots. That's the simple fact.”

A win against the Commodores would match the Razorbacks’ regular season win total from last season with 11 games still on the schedule.

Vanderbilt has lost its first four conference games, most recently dropping an 84-71 decision to Tennessee on Jan. 8. Neither the Razorbacks nor the Commodores have not played since that day.

The Commodores’ four SEC losses have come by an average of 21.8 points, with its worst loss coming by 28 points to Mississippi State. Ciaja Harbison has been a bright spot for Vanderbilt. She ranks top five in the league in both scoring average and assists.

“She can go create her own shot at any point in time,” Neighbors said of Harbison. “So, she'll draw our perimeter defense, but then the second you start focusing too hard on her, she can distribute it to the others. She's not one dimensional, but she certainly does have the green light. and she'll be the top of the scout for sure.”

Jada Brown, a freshman guard for the Commodores, has started 17 of the team’s 18 games. She was teammates with Arkansas’ Maryam Dauda at Bentonville High School under coach Tom Halbmaier. She also trained with Razorbacks guard Avery Hughes who graduated from BHS in 2019 but was never on the same team.

“She has obviously found the right fit for her, a good home,” Neighbors said of Brown. “She has played well. You know, our hope as people in Arkansas is that all kids go and represent Arkansas wherever they play. But we'll do our best to guard her. I don't want her to have a great homecoming, not because she's from here, just because I don't want any of their players to have a good game.”