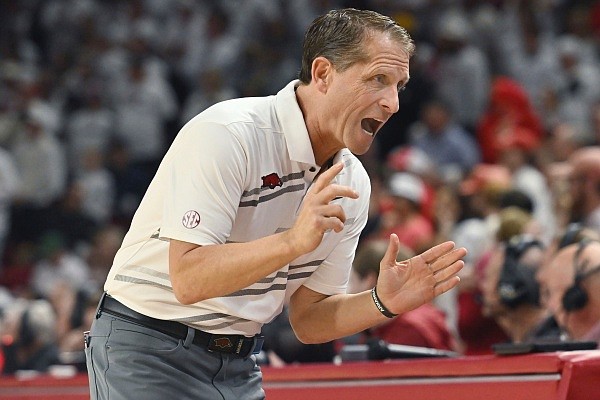 FAYETTEVILLE — Arkansas coach Eric Musselman said playing competitively has become an issue for his team after Vanderbilt beat the No. 15 Razorbacks 97-84 on Saturday at Memorial Gymnasium.

“I mean, we’ve lost three straight games by double digits,” Musselman said. “I don’t recall a team we’ve coached doing that unless it was at the NBA level.”

Musselman couldn’t recall it happening, because it never had previously in his eight seasons as a college coach until the last three games.

Arkansas’ three-game losing streak started with a 72-59 loss at No. 22 Auburn. Then No. 4 Alabama beat the Razorbacks 84-69 on Wednesday night in Walton Arena — Arkansas’ most-lopsided home loss in Musselman’s four seasons.

As the coach at Nevada and Arkansas prior to the last three games, none of Musselman’s teams had suffered double-digit losses in more than two consecutive games.

More from WholeHogSports: Arkansas' defense no-shows in second half at Vanderbilt

In Musselman’s three seasons as an NBA coach, twice the Golden State Warriors had as many as three consecutive losses by double digits with it happening once in 2002-03 and 2003-04. In his lone season as Sacramento’s coach in 2006-07, the Kings never had three consecutive double-digit losses.

Arkansas (12-5, 1-4 SEC) is tied for 11th in the conference standings with LSU and Mississippi State. The only SEC team below the Razorbacks is Ole Miss at 0-5.

“But we have a whole group of guys that are learning, and we’re trying to learn as well [as a coaching staff].”

Arkansas has nine healthy newcomers who are experiencing SEC play for the first time.

With the loss of sophomore forward Trevon Brazile, a transfer from Missouri, to a season-ending knee injury in the nine game against North Carolina-Greensboro, the only Razorbacks with previous SEC playing experience are junior guard Davonte Davis and senior forward Kamani Johnson.

“From a competitive standpoint, we have a lot of guys that don’t understand how hard it is to win in this league,” Musselman said on Arkansas’ radio broadcast after the Vanderbilt game. “And sometimes there’s a learning experience.

“So right now it’s hard to win in conference. It’s something new to a lot of guys.”

Along with Brazile’s loss, the Razorbacks have been adjusting to not having freshman guard Nick Smith, a projected NBA Draft top five pick. Smith has missed 12 games, including the last six, because of a knee injury.

Musselman has said he expects Smith to be out at least until the end of January — another five games — and there’s no timetable for his possible return.

More from WholeHogSports: The latest in Razorbacks recruiting news

“I still think we’ll be fine,” Council said. “I think we can bounce back good. We’ve just got to lock back in.”

Arkansas will try to bounce back at No. 20 Missouri, where the Razorbacks play on Wednesday night two weeks after they beat the Tigers 74-68 in Walton Arena for their lone SEC victory. The Tigers (13-4, 2-3) lost at Florida 73-64 on Saturday.

“All we can do is get ready and prepare for Missouri like we’ve prepared in the past,” Musselman said. “That’s all we can do. That’s what we’ll do.”

Defense figures to be a focal point in practice for the Missouri game after Vanderbilt shot 69.2% (18 of 26) and hit 6 of 9 three-pointers in the second half against the Razorbacks.

“You’ve got to play hard, you’ve got to keep the guy in front of you, you’ve got to defend at a high level,” Musselman said. “The staff’s got to do a better job, I guess as well, across the board.”