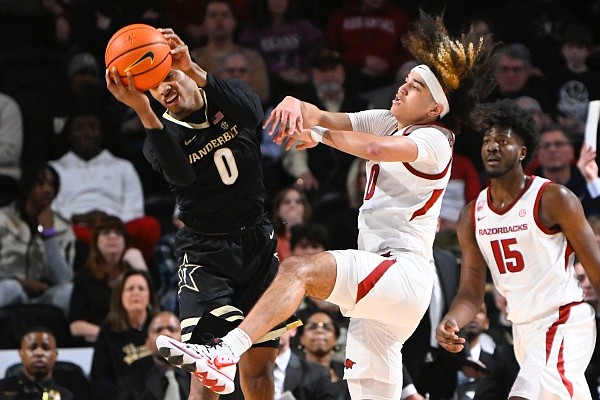 Vanderbilt guard Tyrin Lawrence (0) and Arkansas guard Anthony Black (0) battle for a rebound during the second half of a game on Saturday, Jan. 14, 2023, in Nashville, Tenn. Vanderbilt won 97-84. (AP Photo/John Amis)

Certainly seemed so Saturday for the free-falling Razorbacks, who are 1-4 in the SEC after losing 97-84 at Vanderbilt in Nashville, Tenn.

With 49 seconds left in a first half that Arkansas led 42-34, Arkansas freshman Anthony Black – with body language some might deem reprimand worthy – stepped over fallen Commodore Quentin Millora-Brown, who fouled Black as he scored. Vanderbilt guard Ezra Manjon took offense and flagrantly shoved Black from behind.

More from WholeHogSports: Razorbacks fall to No. 25 in latest AP poll

The formerly second-half Hogs that started 12-2 overall, including rallying from down 25-8 to prevail 74-68 for its lone SEC victory over Missouri in Bud Walton Arena, have consecutively yielded 51 and 63 second-half points. Alabama cracked a 33-33 halftime into an 84-59 blowout after Arkansas’ poor first half triggered a 72-59 loss at Auburn.

Offense rather than defense cost Arkansas most at Auburn and at LSU.

Forgotten as a first-half plus turned second-half minus against Vandy, 7-foot Commodores center Liam Robbins played just 42 first-half seconds because of two quick fouls. No Robbins hindered Vandy’s first half.

A game fresh Robbins – 14 points, 6 rebounds and 3 blocks in the second half – proved more than the Hogs could handle while deadly dribbling guard Tyrin Lawrence and other Commodores hit sprees of threes.

“I thought Robbins was absolutely incredible in the second half,” Arkansas coach Eric Musselman said. “I thought he was a dominant force. I thought Lawrence dominated us off the dribble.”

Arkansas’ defense hasn’t mustered the steals that Musselman expected, but it was difficult to score on until these consecutive second-half debacles.

“We didn’t play with any defensive intensity at all,” Musselman said. “This is a struggling, young ballclub.”

No doubt Missouri, rematched with Arkansas on Wednesday at Mizzou Arena in Columbia, Mo., seeks revenge on Hogs recently not resembling the comeback crew that overcame Mizzou.

In Musselman, the Hogs wield an infinitely better coach guiding them to consecutive NCAA Elite Eights, but those recalling John Pelphrey’s 2008-09 Razorbacks opening 12-1 non-conference then floundering 2-14 in the SEC may wince sensing a distant nightmare looming uncomfortably closer.

“Our men’s team is phenomenal,” Harter said. “Our women’s team is really good. I think both of us are capable of winning the SEC meet and the national meet.”